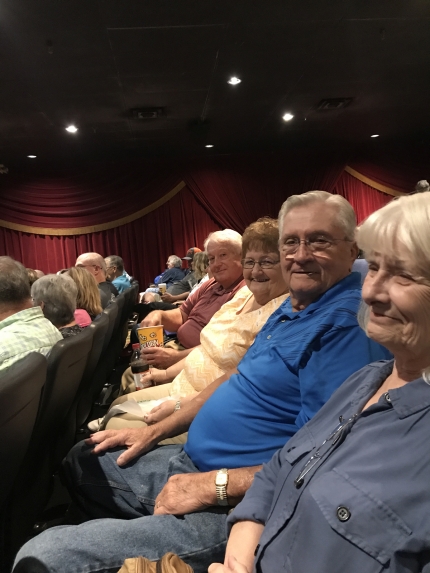 Tim Prososki’s dad, Ken, second from right, and his wife Nancy, front, along with Tim’s aunt and uncle, Marilyn and Bill McGahan, just happened to be in the audience Sunday night when he was named Branson Show Awards 2017 Steel Player of the Year.

My in-laws Ken and Nancy Prososki visited us this weekend. They don’t make the trip to the Ozarks very often; it’s a long haul from McClelland, Iowa. Also, much to our delight, my husband Tim’s uncle and aunt, Bill and Marilyn McGahan, were spending some time in Branson, and they drove to our house in Protem on Saturday, which was my mom Lorene Loftis’s birthday. Once the McGahans recovered from driving Highway 160, we all had a wonderful time visiting and celebrating. (That drive from Branson to Protem is hard on people from the flat lands of North Platte, Nebraska.)

The four of them, along with Mom and I, made plans to watch Tim perform at Grand Country Music Hall in Branson on Sunday. He plays steel guitar and dobro in two Sunday shows there with the Bilyeu sisters, Tammy and Tonja, phenomenal singers who toured with Mel Tillis for 16 years. (They are amazing and won the Vocal Duo of the Year award Sunday night at the 2017 Branson Terry Music Awards show.) The Ozarks Gospel show is at 2 p.m., and Ozarks Country, a classic country music show, is at 7 p.m.

I’m pretty sure no one in America loves classic country music as much as my father-in-law. Songs by Johnny Cash, George Jones, Conway Twitty and Merle Haggard were the childhood background music for Tim and his brothers, Rick and Ronnie. Ken loves that music, and he passed that love on to his three boys.

Tim started learning to play guitar in third grade; he wanted to play the country songs he heard on the radio.  Ken signed him up for private lessons, and Tim found that he loved the guitar. On weeknights, it was routine for Ken to come into his middle son’s room to tell him goodnight and have to unplug the guitar amp so Tim would stop playing and go to sleep.

A turning point came for Tim (and the whole family, really) about a year later when a group of local musicians got together for a jam session at the Prososki family home in Omaha, Nebraska. Among them was a steel guitar player named Chuck Lettes, who has since shared the stage with artists like LeRoy VanDyke, Doug Kershaw, Johnny Lee and the Nitty Gritty Dirt Band. Tim told me how he watched Chuck play for hours that night and how he ached for a steel guitar of his own.

But steel guitars are really expensive. And everyone knows how little kids can be so passionate about something for a week or two then move on to something else. But Tim didn’t move on. I’ve heard lots of family stories about the legendary fits he threw, begging and crying for a pedal steel guitar of his own. Finally worn down and semi-convinced that Tim might stick with it, Ken scraped together the money and bought the guitar.

Not long afterward, Tim’s older brother Rick learned to play bass, and his little brother Ronnie took up drums, and together they formed a family country band with Ken’s brother Gene, who sang and played guitar. After that, virtually all of Ken’s weekends were spent loading and unloading equipment and driving kids, instruments and amps to gigs all over Nebraska and Iowa.

I don’t really believe in coincidence. Call me sentimental, but I think sometimes life comes full circle in the sweetest, most perfect of ways. Sunday night, Tim was named Branson Show Awards 2017 Steel Player of the Year. It was a huge surprise – especially to Tim. Out of all the Sundays that Tim has played in Branson, how sweet and perfect is it that his dad happened to be in the audience that night when it was announced?

Ken invested a lot of work, time and money supporting his boys’ dreams, but he loved every minute of it. I know because he’s told me so – and because I saw it in his eyes  Sunday night as he applauded his son.