Living up to the grandma challenge – or trying to 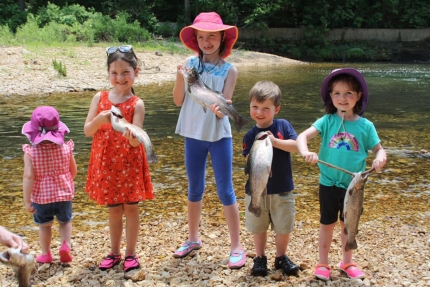 A successful fishing trip to Rockbridge Rainbow Trout ranch was a proud accomplishment for almost all of Sue Ann’s five bi-coastal grandkids during their visit to Ozark County last week. 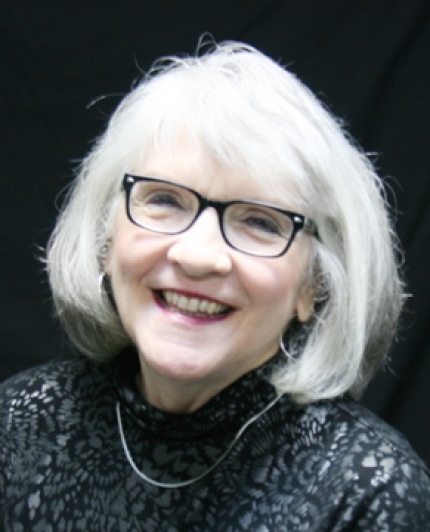 The Fantastic Five – my five bi-coastal grandkids – visited me last week, along with their parents. Physically, we were all gathered here in Ozark County, but in my heart, I was in heaven – and my second-oldest grandchild, Reese, 5, seemed to sense my impending residency there. I met her and her family at the arrival gate at Springfield airport then hurried to retrieve the car from short-term parking. While she waited at the curb for me with her parents and her little brother, Cleo, Reese anxiously hopped up and down and said, “Oh, I hope Grandma doesn’t die.”

It’s often a little sobering to be with Reese. She’s the one who tells it like it is – or at least tells it as she sees it. When I was in Oregon with her earlier this year, she asked how old I was. When I answered, she looked at me solemnly, reached out to pat my silver hair, and replied, “I’ve got bad news for you, Grandma. You’re gonna die soon.”

While the kids and their parents were here, we (the imperial we, meaning I sat and watched) caught minnows and crawdads in Caney Creek, floated and frolicked in Pine Creek, caught trout at Rockbridge, fed the carp at Theodosia Marina and decorated several generations of family graves in Gainesville, Pontiac and Smith Chapel. I was overjoyed, watching my kids and grandkids reconnect with their hillbilly roots.

The Virginia contingent stayed on awhile after the Oregon group headed back home, and I accompanied them to Branson, where my daughter, Reagan, and I shepherded her three girls – Lily, 7; Vivian, 3; and Penelope, almost 2 – through a host of tourist-focused fun. Here are a few of the highlights:

• We waded through the crowd at Dick’s 5 & 10, which is “the best store in the whole wide world,” according to Lily – at least it was until her mom vetoed a Godzilla-sized stuffed cardinal that Lily promised to love forever and carry home on the plane, no problem, even though, technically, it would probably require a seat of its own. Heart-broken, Lily settled for a red, fold-up Chinese fan painted with flowers. Vivian chose a candy necklace but then cried later when she discovered the “beads” were too hard to bite off with her baby teeth. Grandma came to the rescue, smashing the candy with a frying pan from the condo’s kitchen.

• At Dolly Parton’s Stampede, everyone is served the same menu: soup and a cheese biscuit, a whole small roasted chicken, a slice of pork loin, half a baked potato and corn on the cob with an apple turnover for dessert. Vivian, the 3-year-old, took one look at her feast-filled plate and said, “I want pizza.”

• Next, the “big girls” (Lily and Vivian) and I visited the Butterfly Palace. (Their mother, who doesn’t like what she calls “flying bugs,” stayed at the condo with the napping Penelope.) We walked around the aviary for nearly an hour, marveling at the beautiful butterflies that landed on our Gatorade-filled flower tubes (and also our shirts and arms). Then the girls insisted we visit the palace’s “mirror maze,” which seemed innocent enough – until we took about five steps in and got completely lost in the darn thing. Another grandma and I, along with our grandkids, walked around like zombies, arms out, crashing into reflections of ourselves as the grandkids laughed hysterically and the grandmas grew increasingly flustered in the dimly lit trap. Finally, I sat down on the floor and dug through my purse for the tickets receipt, hoping to find a phone number I could call to summon a Butterfly Palace rescue team. Just as I was dialing the number, Lily shouted that she had finally found a way out – about 10 feet from where we huddled in complete bewilderment near the entrance.

• The condos where we stayed had a swimming pool equipped with a slide the girls loved. But even better than the slide, for the girls at least, was the mallard duck who repeatedly landed in the pool to swim around with them for a bit before flying off and then returning again and again.

• Next we set out to tour Talking Rocks Cavern in Branson West. There are 150 steep steps down into the cave’s beautiful opening room, and I’d estimate that the two big girls, and I, plus Reagan, wearing Penelope in a carrier, had made it down about 110 of them when Penelope decided she wasn’t into spelunking after all. Her screams, echoing through the huge cavern, just about deafened us and the 20 or so other people on the tour, so Reagan carried the wailing Penelope back up the steep steps, with Grandma in tow. Once we arrived back in the reception area, Reagan handed off the still-screaming toddler and returned to join the big girls and the rest of the tour group. Penny was beside herself, suddenly deciding she did want to visit the cave after all – at least she wanted to go with her mama, wherever she was going. Seeing stars after the hurried climb back up the steep steps and wishing I’d brought supplemental oxygen, and perhaps a defibrilator, I could only sprawl on a chair and wheeze while watching the poor baby have her meltdown. Finally my normal breathing returned, and I managed to carry the kicking, flapping, shrieking girl outside, hoping she would calm down and toddle around the appealing play area with its kid-friendly ramps, tunnels and slides. Instead, like a scared dog, Penelope scampered up one of the ramps, still crying, and hid in one of the tunnels, wailing and screaming as though pursued by monsters. There was nothing else to do but crawl up the low-ceilinged ramp on hands and knees and stretch out into the even smaller tunnel until I could grab one of Penelope’s flailing feet and drag her out by one leg. It was quite a sight, I’m sure, for innocent visitors arriving at the cave-entrance shop to see Grandma’s industrial-sized derriere protruding from the tiny play-space tube, which was emitting tortured howls of heartache and despair. Fortunately, the tour ended soon, Penelope’s mama returned, and off we went to the next adventure.

Growing up, I had the world’s best grandmas, and when my grandkids started arriving, I vowed to carry on their tradition and be the kind of grandma they’d been to me. But to be honest, I’m not sure I’m up to the challenge. There were moments during the Fantastic Five’s latest visit – lost in the mirror maze or wheezing at the stop of the cave steps – when I stopped laughing and wondered if maybe Reese was right. Maybe I was going to die soon.