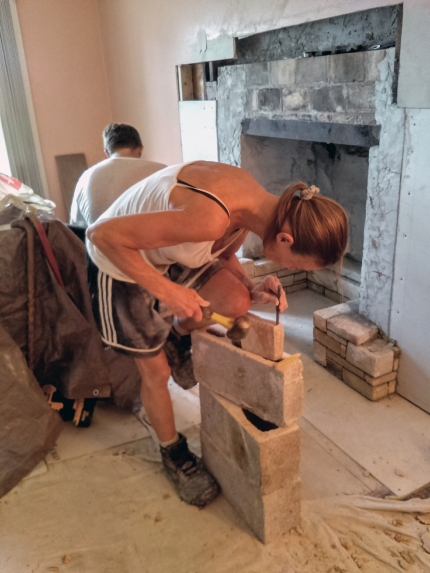 Kathy Weinert works to chisel a stone to fit a spot within Rick and Jill Norton’s fireplace. Rick said the Weinerts were true craftsman, and “as many stones were chosen as were rejected.” Photo courtesy of Jill Norton. 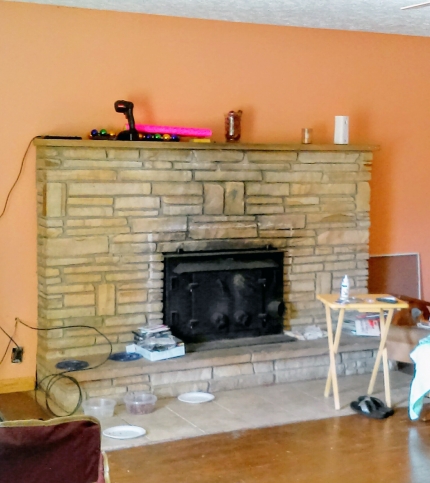 Jill and Rick Norton love their new ‘fireplace’ after stonemasons Travis and Kathy Weinert refinished the original damaged structure, pictured above, this fall. Jill said she was especially happy that the Weinerts were able to include several stones she picked from their property, including the large darker stone in the center. Rick, a skilled carpenter, plans to add a wood mantle to the top in the future. Photo courtesy of Jill Norton. 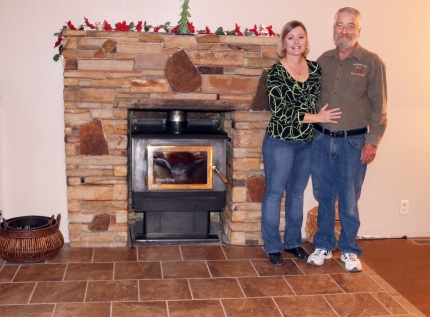 Jill and Rick Norton are pictured with their new ‘fireplace’ after stonemasons Travis and Kathy Weinert refinished the damaged structure, in the previous photo, this fall. Jill said she was especially happy that the Weinerts were able to include several stones she picked from their property, including the large darker stone in the center. Rick, a skilled carpenter, plans to add a wood mantle to the top in the future. Photo courtesy of Jill Norton. 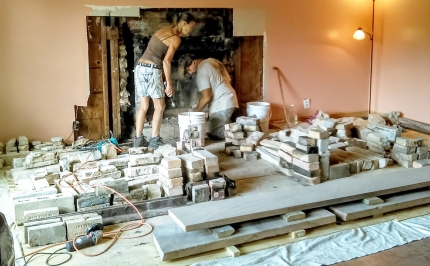 Kathy and Travis Weinert took Rick and Jill Norton’s existing fireplace down, stacking the existing stone on the floor, as pictured here. The Nortons said they were surprised by how different the finished fireplace looked considering how much of the original stone was used. Rick said it is a sign of a true craftsman to piece the stones together in a way to make the natural color really come out. Photo courtesy of Jill Norton. 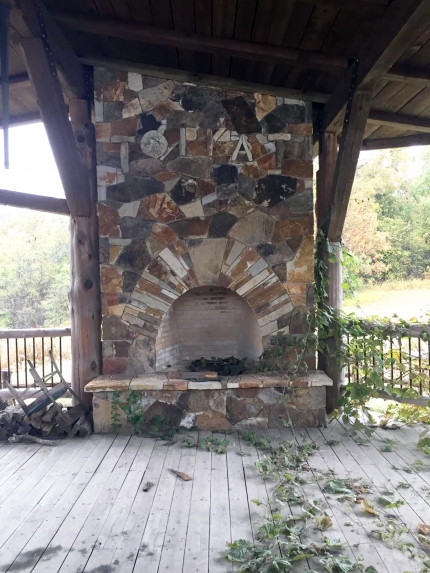 The Weinerts have worked on many masonry projects in and outside of Ozark County. This fireplace, located at a property near the Missouri/Arkansas line, is one that stands out as particularly artistic with lettering carved from stone. Kathy says she believes the couple completed this fireplace in 2013. Photo courtesy of Kathy Weinert.

Despite living away for several years, Ozark County native Rick Norton has always considered Ozark County his home. He and wife Jill looked forward to the day they could retire and move back to the area. After some unexpected health issues, that day came a little sooner than expected. But the early retirement also meant the couple could begin the exciting process of finding the place they would call home for the next chapter of their lives.

“In June of 2016, we sold our home in Nixa and moved to Theodosia, where we spent the next 10 and a half months living in our camper and a small rented cabin while we searched for a new home,” Jill told the Times.

Although difficult at times, the long process paid off when the couple spotted a place they considered a real diamond in the rough. Rick, a retired builder, and his committed wife Jill weren’t deterred by the thought of applying some real TLC and elbow grease for the right house. So when they  came across a fixer upper they could easily see themselves living out their future in, they jumped at the property.

“We both felt it could be a wonderful home for us, although a lot of repairs were obviously needed,” Jill said. “The kitchen required a complete remodel. The ceiling in the kitchen and living room had a lot of cracks in it, and a portion was literally being held up by the upper cabinets. The floor had rotted. The whole thing had to be torn out and replaced down to the floor joists. The lower cabinets were falling apart and had to be replaced. Under the entire house, the floors were sagging and additional supports were needed in the basement.”

The long list of updates and renovations included one that would unite the Nortons with a local couple known for their excellent rock work. Their fireplace, a cornerstone of the new Norton home, was badly in need of repair.

“We knew something substantial would have to be done to it. The facing stone had some cracks, and it was pulled away from the wall just a little at the top. We knew it would have to be repaired before it could be safely used,” Jill said. “We both have a great appreciation for craftsmanship and didn’t want to hire just any brick layer. We wanted an ‘old-time’ stonemason. They seem to be a dying breed, and their work, a dying art. There are lots of people out there that can lay stone, but few real stonemasons.”

As the Nortons began asking friends and acquaintances in the area for recommendations, the same names kept popping up: Travis and Kathy Weinert.

The Weinerts, known for the artistic quality of their masonry work, have been perfecting their craft as a spousal team for nearly two decades.

“We met while he was building the fireplace at my mom’s in Westfield, New York, just outside of Buffalo,” Kathy told the Times. “Travis’ father and uncles were all masons. I was working as a physical therapist assistant when we met.”

Kathy soon learned the trade from Travis, who became her husband and partner, and the couple began their masonry business in 2000. They’ve continued their work while living in different places across the county, and when they relocated to Ozark County eight years ago, they found passion and a need for a full-time masonry business in the Ozarks.

Rather than laying cultured stone and artificial rock, the Weinerts pride themselves on preserving the declining art of true stonemasonry, utilizing natural rock and hand-piecing each element into just the right place to create a work of art.

“We enjoy creating together. It’s a legacy of art that will outlive us,” Kathy said. “The challenge is puzzling random stone and making it look good. And there’s fun in being together with your best friend and flowing with the rock. He lays one side, and I lay the other, and you can’t tell who laid which side because we’re so in tune with each other. We say we share a brain.”

That shared brain comes with a shared sense of humor, and the Weinerts keep each job fun and lighthearted. Although they love the artistic process of traditional masonry, Kathy is quick to explain that natural stone isn’t the only wrench in their toolbox.

“We lay brick, block and some tile. Basically everything but eggs!” she said, laughing.

After hearing the positive reviews from friends and neighbors, the Nortons made contact with the Weinerts, and the journey of bringing new life to the old fireplace began.

“The process had to start with tearing out the old fireplace facing. Once that was done, it revealed even larger defects. As it turned out, the entire fireplace, as well as a portion of the chimney, had to be torn out. In the middle of this, in consultation with the Weinerts, we decided to turn the fireplace into an alcove for a freestanding wood-burning stove instead of using a fireplace insert, but we still wanted a fireplace-look to the finished project,” Jill said.

The Nortons say that working with Travis and Kathy was a delight, with excellent communication throughout the entire process.

“We had lots of discussions with Travis and Kathy, explaining the pros and cons of the various options available to us. When they ran into an unexpected problem, they would explain and show us what the problem was and how they planned to deal with it,” Jill said.

The Weinerts tore down the existing fireplace and began the dusty job of chiseling and grinding rock to build back the new fireplace. The entire process, including tear down, restructuring, working through unexpected setbacks, building back the fireplace, replacing the terra cotta liner and pouring a new concrete cap on the chimney, took 10 weeks.

“That may seem to be a lot of time for a project such as this, but the results are well worth the time,” Rick said. “If you want true craftsmanship, you can’t rush it.”

The Nortons say they consider the finished project a masterpiece.

An inspiration for the future

As cool fall days begin to transition into winter, Rick and Jill Norton say they especially appreciate the hard work and craftsmanship the Weinerts brought to their new home.

“We’ve been using the wood stove in the ‘fireplace’ for the past couple of weeks. There is really no comparison with this fireplace and the old one. The old one was just stones mortared into place. The new one is truly a work of art, and the highlight of our home,” Jill said.

She explained that the way Travis and Kathy chiseled the stone to fit in the redesigned space really brought out the natural color of the stone. The Weinerts were also able to utilize several large rocks off the Norton property, something that was important to the couple.

“Travis and Kathy are very meticulous in their work. Their attention to detail is evident in the finished product. Two words that come to mind are artwork and craftsmanship,” Jill said. “The rest of the house is still a work in progress. But our living room, with our beautiful new fireplace, is proving to be our inspiration while the work on the rest of the house continues.”