Suspect hit by bullet after shooting at his neighbor, who fired back 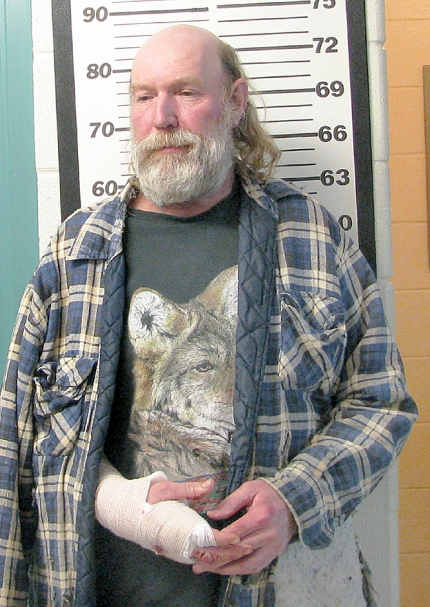 A gunfire exchange in Dora last week ended with Calvin L. Grisham in handcuffs and a bullet wound to the hand.

Grisham’s age is not listed in court documents, but online records say that he was born in 1965, making him either 55 or 56 years old.

The Dora man is being held in the Ozark County Jail without bond and has been charged with a class B felony of unlawful use of a weapon by discharging a firearm at a habitable structure and the unclassified felony of armed criminal action.

He appeared before Associate Judge Raymond Gross Feb. 25 and was arraigned on the charges. He was informed of his right to a lawyer and his right to remain silent. He was also told about Missouri Public Defender services.

According to this week’s sheriff’s report, Brice Bennett, the victim in the case, called the sheriff’s report at 7:43 p.m. Tuesday, Feb. 23, to say that his neighbor was threatening him with a pistol and was outside his house on County Road 179 in the Dora area.

The probable cause statement filed in the case by Ozark County Sheriff Cass Martin indicates that about a half hour later, the sheriff’s department dispatch office was notified by the Missouri State Highway Patrol at 8:11 p.m. that a shooting had occurred at the residence.

Three MSHP troopers and officers from OCSD responded, along with Dora VFD first responders. Ozark County Ambulance and Air Evac  were also called to the scene. After the helicopter landed, Grisham reportedly refused air transport and was instead taken by ambulance to Ozarks Healthcare in West Plains.

Bennett told the sheriff that Grisham came onto the property and fired a weapon through the window of his house, the statement says.

Bennett said he returned fire, shooting back out the window with a .22 rifle, hitting Grisham in the hand.

Martin said when he found Grisham, the right-side pocket of his blue jeans was bloodstained. He then saw that Grisham had a single gunshot wound to his right hand.

Grisham was treated for the gunshot wound at the hospital and then released into the custody of the West Plains Police Department, who then transferred custody to the OCSD. Grisham arrived at the OCSD at 11:44 p.m. that night.

Although the document doesn’t say which specific drugs or alcohol Grisham might have ingested prior to the event, the sheriff does say that intoxicants may have been involved.

“I believe that the defendant poses a danger to the crime victim and public due to discharging a firearm into a residence in aggression while under the influence of intoxicants,” Martin concluded in the report.

Online records show that Grisham has had one prior conviction. In that case, he pleaded guilty to driving while intoxicated with alcohol and failure to have two lighted headlamps on a vehicle, both misdemeanor charges, in April 2012. He was ordered to pay $350 fine for the DWI and a $20 fine for the headlight violation.