Sprague accused of murder and kidnapping before fleeing to Oklahoma 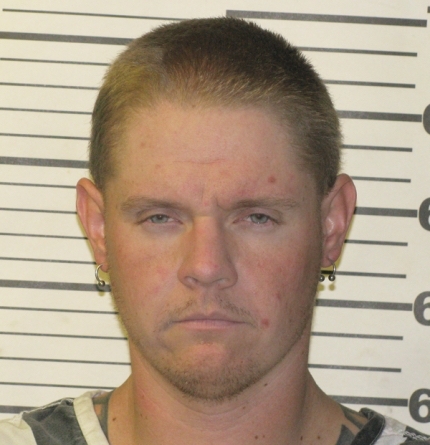 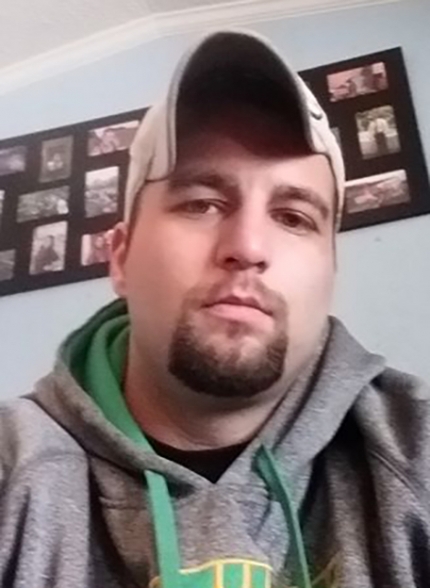 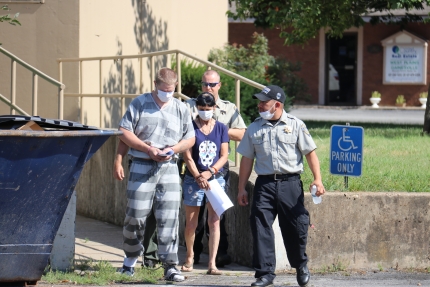 He is being held in the Ozark County Jail without bond. A bond reduction hearing before Gross is scheduled for July 28.

The charges were filed in connection with the July 15 shooting death of 28-year-old Gainesville resident Kameron Stillwell and the subsequent kidnapping of Thornfield resident Kimberly Morris and Ava resident Kaylee Isaac, who were said to be romantically involved with Sprague. The women said Sprague told the women they “were his property” and physically threatened them when they tried to leave him.

After allegedly shooting Stillwell in front of them July 15, Sprague reportedly turned the gun on Morris and Isaac when they tried to help Stillwell as he gasped for breath for five to 10 minutes after he was shot. Morris told officers she tried to call 911, but Sprague said he'd shoot her next if she did. After Stillwell was dead, Sprague reportedly stole Stillwell's gun, cigarettes, wallet and other items and ordered the women to get in his vehicle. He then fled to Oklahoma.

Sprague was arrested July 16 in West Siloam Springs, Oklahoma, signed extradition papers there and was transported back to Ozark County Tuesday.

Ozark County Sheriff Darrin Reed said Monday that OCSD Deputy Cpl. Curtis Dobbs and Ozark County Deputy Dustin Smith were present during a Monday autopsy on Stillwell’s body in Nixa. Reed said official results of the autopsy aren’t expected for several weeks, but the pathologist who performed the exam told the deputies that Stillwell had been shot four times. He had one bullet wound in the neck and three in his back.

It was a concerned friend’s July 15 visit to Morris's Thornfield home that led to the discovery of the dead body inside – and set Ozark County Sheriff’s Department officers on the trail of the two women who were reportedly kidnapped by the shooter.

The call prompted deputies to investigate and file charges against Sprague for Ozark County’s most recent murder – the county’s fourth death investigation this year.

Other investigations included the Feb. 12 stabbing death of Robert Chambers (which was ruled as justifiable homicide by a coroner’s inquest), the May 9 shooting death of Dora resident Devon “Porkey” Smith and the May 30 discovery of Brittany Gorman’s body in the Mark Twain National Forest near Dora.

Door and window wide open, body on the floor

According to the probable cause statement Dobbs filed in the case, an area resident called 911 at 1:13 p.m. Wednesday, July 15, to report that she’d driven to Kimberly Morris’ residence on County Road 850 in Thornfield because she hadn’t been able to reach Morris and was worried about her.

The caller, who said she was a friend of Morris, told the Ozark County Sheriff’s Department dispatcher that when she pulled up to the house, she noticed that the door was standing open and boards had been removed from a window that was normally boarded up. The woman said when she entered the house through the open door she saw Stillwell’s body lying on the floor. She told the dispatcher it was apparent he was dead.

Dobbs wrote in his report that he was aware Morris and Stillwell had been in a relationship that recently ended. A witness, who is not named in the statement, told Dobbs that Morris began dating Sprague after her breakup with Stillwell.

Another witness, also unnamed, reportedly told Dobbs that Sprague had recently asked where he could buy a 9 mm handgun or .38-caliber ammunition.

Three bullet wounds in the back, no shell casings

Dobbs arrived at the Morris residence at 1:38 p.m., 25 minutes after the 911 call was made. He mentions in his report that the door was open when he arrived.

He spoke with the reporting party about the incident and entered the home “in an effort to check on the wellbeing of the person reported to be inside.” He found Stillwell’s body lying on his right side on the floor with his feet near the front window of the home.

The body was surrounded by blood, Dobbs wrote.

He contacted Ozark County Coroner Shane Ledbetter, who responded to the home and pronounced Stillwell dead. In the process of removing the body from the crime scene, Dobbs found three holes in Stillwell’s upper back.

The report says the holes, which appeared to be gunshot wounds from a medium-caliber firearm, were spread across a 3- to 4-inch area of Stillwell’s back. There were no exit wounds.

Dobbs requested and was granted a search warrant of the home, which was executed immediately. No shell casings were found at the house, the report says, indicating “the shooter either picked up the casings [that were] ejected from a semi-auto type firearm or the weapon was a revolver where the used casings are not ejected from the weapon,” he wrote.

The Ozark County Sheriff’s Department “pinged” Morris’ and Sprague’s cell phones, a process that can identify the closest cell phone tower the phones’ signals last used to receive reception. The phone pings showed that the two were in Arkansas, near the Oklahoma border.

OCSD called the nearest police agency, the Siloam Springs (Oklahoma) Police Department, and informed them of the situation. On July 16, Siloam Springs PD arrested Sprague and held him on an unrelated outstanding warrant that had been issued in a separate Ozark County case.

Morris and another woman, Kaylee Isaac, were with Sprague when he was arrested, the statement says.

Following Sprague’s arrest, the Siloam Springs PD searched the suspect’s vehicle and a motel room. A .38-caliber revolver and a 9 mm semi-automatic handgun were found inside the room and were seized as evidence.

Sprague, who has been convicted of several felonies in his past, is not legally allowed to possess firearms.

When Morris and Isaac were interviewed briefly by the West Siloam Springs PD, they asked to be returned to Ozark County, the statement says. OCSD personnel picked up the two women in Oklahoma and drove them back to Ozark County.

At 9 p.m. that evening, after they arrived back in Ozark County, Dobbs interviewed both women, who signed written waivers and agreed to answer questions related to Stillwell’s death after being advised of their rights, the statement says.

The pair said that for several days before July 15, they were with Sprague at his parents’ house on Highway 181 in Gainesville or at Morris’ home in Thornfield. The women told the officer that Sprague told them they “were his property” and physically threatened them when they tried to leave.

The women said they were with Sprague at Morris’ residence the morning of July 15 when Stillwell, Morris’ ex-boyfriend, showed up at the house. Stillwell was outside “banging on the door” and yelling, demanding that Morris come talk with him, they reportedly said.

Morris refused to talk to him and told Stillwell to leave.

In response, Stillwell, armed with a handgun, reportedly kicked in a boarded-up window in the front of the house and entered the residence.

Sprague, armed with a .38-caliber revolver, was near the room where Stillwell entered, the report says.

Both women told the officer they heard a single gunshot, the report says. Then they heard several more gunshots in rapid succession. The women said when they entered the room, they saw Stillwell lying on his side near the window with blood on the back of his shirt. Stillwell’s hands were moving, the women said, and he appeared to be trying to breathe.

They reportedly ran toward Stillwell to try to help him, but Sprague pointed the revolver at them and told them to “leave that piece of [expletive] alone.”

The women said Stillwell continued to gasp for air for five to 10 minutes. Morris said at one point she tried to call 911, but Sprague told her he would shoot her next if she did.

Sprague then told the women to get his car and drive it around to the front of the residence, the report says.

When the women complied with his order and brought the car around front, Sprague reportedly told Isaac to go back inside the house and get the shell casings he had left in a trash can. After Isaac returned with the spent casings, Sprague put on a pair of gloves and told the women he was going to go back inside to “finish cleaning up.”

The women said when he came out of the house, he was carrying papers that listed several usernames and passwords, a billfold, a credit card and cigarettes - all items he had taken from Stillwell’s body. Sprague also took Stillwell’s handgun, the report says.

Morris and Isaac said that Sprague told them if they did not go with him, he would kill them too and dispose of their bodies. He pointed out that they’d just witnessed what he did to Stillwell, so they knew what he was capable of, the statement says.

Over the next 36 hours, Sprague drove the two women through Missouri and Arkansas and into Oklahoma.

Not the first allegation of holding a woman against her will

Sprague is currently facing charges of domestic assault, delivery of a controlled substance and unlawful possession of a firearm in a connection with an unrelated incident in December 2019.

In that case, Sprague is alleged to have held a woman against her will at his home on Highway 181, threatened her and punched her in the face.

Officers were reportedly alerted to the situation when the victim in that case texted a friend, saying she was being held at the house by Sprague and was afraid to try to leave. She reportedly told that person she’d already been hit in the face and Sprague had threatened to break her cell phone.

Responding officers found the woman in the basement with Sprague. Two .45-caliber magazines with bullets in them were lying in plain view. A family member reportedly told the officers they had taken Sprague’s pistol away and hidden it due to his erratic behavior, but Sprague later surrendered the gun to officers and told them he’d had it.

An SKS rifle with attached magazine and two bags of a crystal substance that field-tested positive for methamphetamine were found near a TV center in the basement where Sprague and the woman were found.

Sprague failed to appear for a July 8 hearing in that case. A capias warrant was issued in that case, meaning a warrant without bond and full extradition rights.

Morris, who also had an outstanding warrant, was arrested and held in the Ozark County Jail. She appeared in custody July 17 before Associate Judge Lynette Veenstra.

Morris’ case was originally filed under Circuit Judge Craig Carter; however, Carter assigned Veenstra to the case during a June 3 hearing.

The online court record from that hearing says the defendant “has a history of failing to report, failing to appear and using controlled substances when not in custody. Def. tested positive for THC and methamphetamine and was arrested in the state of Oklahoma in the presence of a person being questioned for homicide. Def. shall be held without bond pending probation violation hearing. Def. swore as she left the courtroom and used profanity toward the court.”

Morris is scheduled to reappear before Veenstra for a probation-violation hearing at 9:30 a.m. Friday, Aug. 14. She originally pleaded guilty to possession of a controlled substance in March in that case. She was given a suspended sentence, meaning the sentence was not actually ordered against her but could be imposed if she violated probation. She was also ordered to complete the Ozark County drug court program.