More than 100 people attended the informational meeting Dec. 5 in Ava about the future of the new Bryant Creek State Park in Douglas County a few miles north of Rockbridge. The meeting included three exhibits where Missouri State Park employees answered visitors’ questions and shared information about the park. Written comments were accepted at the meeting, and online comments are currently being accepted through Jan. 5, 2018, on the Missouri State Parks website. Photo courtesy of the Douglas County Herald. 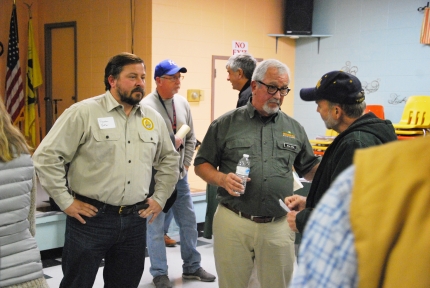 Missouri State Parks director Ben Ellis, center, and Brandon Butler, executive director of the Conservation Federation of Missouri, left, discuss the future of Bryant Creek State Park with an area resident during an informational meeting Dec. 5 at the Ava Community Center. The meeting was held to allow the public to comment on the newly acquired state park, which is currently closed. Photo courtesy of the Douglas County Herald.

This article is reprinted with permission from KSMU.org. Additional information has been added by the Times staff.

Three public meetings on the future of Missouri’s newest state parks are finished, including the Bryant Creek State Park meeting, which was held Dec. 5 at the Ava Community Building.  Comments are also being accepted online through Jan. 5, 2018.

The meetings were scheduled because Missouri Department of Natural Resources officials said there weren’t sufficient opportunities for the public to comment before the Ozark Mountain, Bryant Creek, Jay Nixon and Eleven Point properties were purchased shortly before then-Gov. Jay Nixon’s term ended.

Before the meeting about the Bryant Creek State Park, Missouri State Parks Director Ben Ellis said selling the properties, “has never been an option,” contrary to what some media outlets have reported. “We are focused on currently looking at how to move forward to provide public access to these properties,” Ellis said.

But without funding to move forward, he said, making the properties accessible to the public will be very difficult. DNR currently has $200 million in deferred maintenance on other state parks.

A handout titled “Factors for consideration” that was distributed at the meeting lists cost, available funding sources, available resources (staff, counters, equipment), impacts on the parks system, resources and staff and public input as some of the elements the park system is currently reviewing. The sheet estimates development costs for the primitive park facilities as follows: $130,000 to $390,000 for a 1-mile gravel road; $2,000 to $6,000 for a gravel parking lot; $11,000 for a 1-mile asphalt trail; $10,000 for a 1-mile gravel trail; $40,000 for a two-room vault toilet; and $6,000 to $25,000 per year for resource stewardship.

“I think it should be held back off.  We should investigate re-selling these. We have enough state parks. They only have 45 park rangers, 95 parks. We can’t keep up with this,” Williams said.

She believes, if the land can’t be sold, the state should look into logging the properties to recoup some of the money spent on them.

Tim Stanton feels just the opposite.  The retired Missouri Department of Conservation forester wants the Bryant Creek property kept in public ownership and made accessible to the public for hunting, fishing and camping.

“I just want it for the people.  We’re losing too many pieces of property right now, especially quality property with a lot of river footage.  It’s a jewel.  It’s a jewel of the Ozarks, is what it is,” he said.

MDC had an opportunity to purchase the property at one time, he said, but the funding wasn’t available. It was sold to people who, he said, “cut it pretty heavy, and it broke my heart.”

According to Ellis, the Bryant Creek property still has a stand of native tall pines, which is rare to find anymore in the state.

Stanton would like to see a partnership between MDC and DNR that would allow Bryant Creek State Park to eventually open to the public.

That’s a possibility, according to Ben Ellis.

“We’re looking very closely at the possibility of various partnerships. MDC is one. It may be something they’re very interested in, and if they’re interested, we’d like to pursue that discussion. There may be public/private partnerships that are available. We have many concessionaires who do improvements in parks who are already established. It could be something like that,” Ellis said.

Partnerships will be one of the “very viable” ways they can move forward on working to provide public access to Missouri’s newest state parks, he said.

So far, that appears to be what the majority of those attending the meetings would like to see happen.

Brian Haenke, who lives near Gainesville, attended Tuesday’s meeting because he’s interested in what happens to Bryant Creek State Park, which is close to where he lives.

“I would hate to see the park, you know, be exploited, the land be exploited for its natural resources.  I feel it’s very important to retain the natural state of the park and the  habitat and the Bryant Creek Watershed,” he said.

DNR’s communications director, Connie Patterson, said while some who attended last Monday night’s meeting in Branson on the Ozark Mountain State Park wanted to see the property sold, the vast majority was passionate about keeping it in public ownership.

“I would say predominantly the public sentiment has been, ‘Let’s keep these lands in public ownership as much as possible,’” said Patterson.

DNR has extended the public comment period on these properties to Jan. 5, 2018.  Ellis said they want to “make a good faith effort to hear what people have to say.”