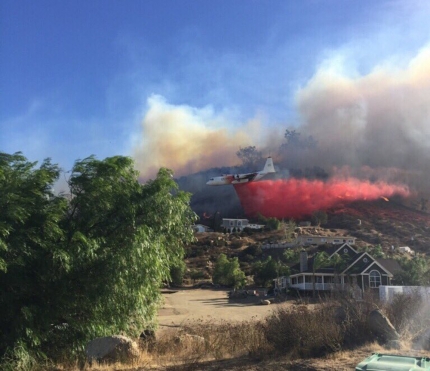 The tan-colored, single-level home just below the red fire-retardant chemical plume in this photo by Riverside (California) Press-Enterprise reporter Brian Rokos belongs to Alex and Vonda Solomko, Ozark County native Kristin Solomko’s in-laws in Murrieta, California. During the Liberty Fire that burned out of control in that area last week, fire crews decided to drop their load there because they saw the fire breaks that had been created around the home and thought it could be saved. 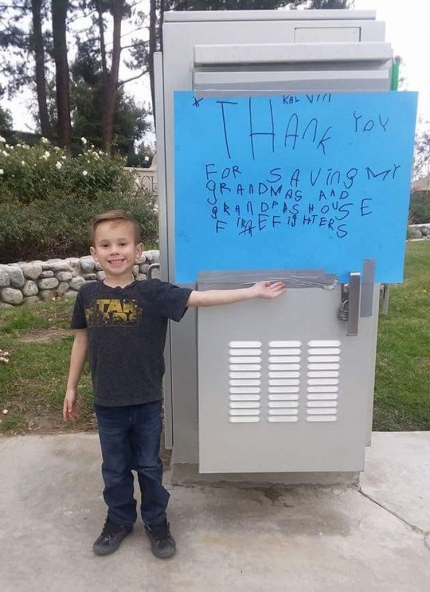 Five-year-old Kalvin Solomko shows the poster he hung at the end of his grandparents’ street in Murrieta, California, to thank the firefighters who saved his grandparents’ house (and Kalvin’s bicycle) from a recent wildfire. Kalvin’s other grandparents are Bryan and Jerri Sue Crawford of Gainesville. 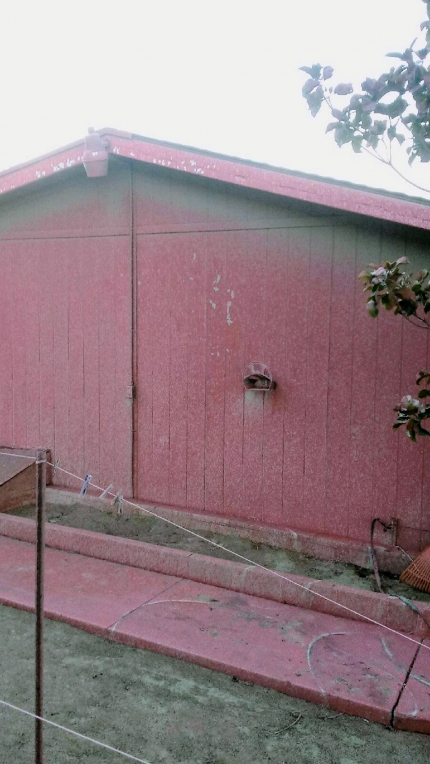 The fire-retardant chemical dropped by the firefighting aircraft stained the Solomkos' house pink and red – but saved it from destruction.

An Ozark County native recently got a too-close-for-comfort view of California wildfires that have made national headlines during the past week.

For the last three years, Kristin Crawford Solomko, daughter of Bryan and Jerri Sue Crawford of Gainesville, has lived with her husband, Michael, in Murrieta, California, one of the areas in Southern California where historic, fast-spreading wildfires have raged out of control recently, fueled by high winds and dry conditions.

Kristin and Michael and their three children – Kalvin, 5; Stella, 4; and Lillian, almost 3 – live within sight of the steep hillside neighborhood where Michael’s parents, Alex and Vonda Solomko, have lived for 10 years.

Vonda Solomko had been at home earlier in the day Thursday, Dec. 7, with her 80-something mother who was visiting from Arkansas and her 1-year-old granddaughter Isabella when Kristin and Kalvin stopped by. A short time later, after Kristin took Kalvin to school, Vonda and her mother were watching TV, and the power went out, Kristin said. “The wind was really strong, and she thought maybe something had blown over. She looked out back and said, ‘Oh my gosh! Our hill is on fire,’” Kristin said.

Vonda’s husband, Alex, was driving home from his construction job, which had been shut down due to the high winds. As he drove, he worriedly watched the flames on the hillside where they live, and as soon as he arrived home, he hurriedly helped his wife load up her mother and granddaughter into his truck.

“They tried to think of what they should grab, and they thought of the Christmas gifts we had left there to hide them from the kids,” Kristin said. “They threw them all in Alex’s truck, and Michael’s mom and grandmother and Isabella all left. But his dad stayed. But then he said the flames were blowing past him at probably 50 miles per hour, and he had to give up and leave too.”

Alex Solomko drove away and then turned back to watch the thick, black smoke engulf the hillside, knowing his home was lost.

Watching from the valley below and seeing the fire roaring over the hill, Kristin’s husband, Michael, called his dad, who told him the house was gone. “There’s nothing we could do,” Michael’s dad said.

Kristin drove back to pick up Kalvin at his school, which had also lost power. She hated to tell the 5-year-old what had happened, “but everywhere you looked, you could see the fire,” she said. “So it wasn’t like he wasn’t thinking about it.”

Sadly, she broke the news to him: “Grandpa and Grammy’s house has burned down.”

The youngster was most upset about his bike that he had left at his grandparents’ house the previous weekend, Kristin said.

Back at home, Michael told Kristin to “pack up some stuff in case we get evacuated,” and she had just started to do that when “he came back in and said his parents’ house was still there,” she said.

They were stunned – and thankful, especially when they heard the amazing story.

As the fire burned down the hillside, a firefighting air tanker carrying flame-retardant chemicals approached the blaze and dropped its load between the nearest flames and the Solomkos’ house. And just like that, their home was saved.

“Michael’s dad was always, always working on fire breaks,” Kristin said, describing areas around the house that Alex kept cleared of brush and other combustible debris and vegetation. “The firefighters told them that was why they decided to dump the load of retardant there--they saw the firebreaks around the house and thought they could save it,” Kristin said.

Riverside (California) Press Enterprise newspaper reporter Brian Rokos shot a dramatic video of the airborne tanker dropping the red chemical over the home. Kristin shared the video on her Facebook page, posting, “Thank you to whoever was flying this plane.” She added that her in-laws’ house “is red and pink now, but if it wasn’t for that, they wouldn’t have a house right now.”

“Everything on the hill below their house is fine,” she said. “But the people who live above them on the hill were completely burned out. They had just moved in two weeks ago, and they have four kids. They lost everything.”

By Monday, the Liberty Fire was contained while some of the other  California fires continued to burn. One of the fires is said to be the largest wildfire in California history.

In the days following the close call, Michael and Kristin have helped their in-laws clean up their property, brought food to the firefighters and offered help to the burned-out neighbors.

“Kalvin had to wear his fireman’s shirt, and he stood out on the deck, waving to the helicopters that flew over, carrying water to the fires,” Kristin said Monday.

Kalvin also made a poster-board sign that he hung at the end of the street, thanking the firefighters for “saving my grandmas and grandpas house.”