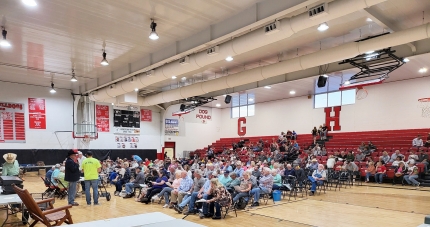 This year’s Lions Club auction, held last Friday, April 22, raised more money than it has in several years, netting nearly $23,000 for Gainesville’s summer ball program and other local projects supported by the Gainesville Lions Club. The total at the annual fundraiser, now in its 35th year, rang in about $3,500 more than last year’s $19,500 raised.

The event included a chili supper and silent auction plus a live auction, both offering a wide variety of goods and services contributed by area merchants and individuals.

Organizers say there were many cash donations given this year.

Two notable items were cinnamon rolls and braided bread donated by Melinda Abraham and fried pies and a strawberry cheesecake donated by Denise Crisp. Combined, the baked goods raised a total of almost $2,500.

This year’s sportsman’s raffle was also a success with Lions Club members selling all 300 tickets for $50 each. Those drawn as winners got to take their pick from several largeticket items including a trailer, 15 different firearms, Blackstone griddle, trailer, kayak, hunting blind and other items.

The Lions Club always contributes a large portion of the event’s proceeds to the summer ball program, which is now managed by the Gainesville Schools. The rest is distributed among various other community projects, including various youth camps, sending local students to Boys and Girls State, providing glasses for needy students and adults, supporting the Interagency Council’s projects such as the Back-to-School Fair, funding holiday food baskets, and contributing to Project Graduations, the Share the Harvest charity venison project, Hootin an Hollarin and the Ozark County Toy Drive. The Lions Club also offers a Lions Club/H. T. Harlin Memorial Scholarship each year to a graduating Gainesville High School senior.