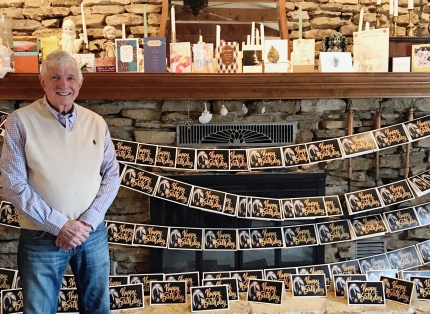 Marv Looney received dozens of birthday cards to mark his 90th birthday on Nov. 9. Eighty of them were identical copies of an electronic billboard that friends and former colleagues at Missouri Western University sponsored over a busy highway in St. Joseph. All of the cards had multiple signatures, some as many as 20, Looney said. Last weekend, 40 family members (“about half the family,” he said) gathered at his Pontiac home to celebrate. Marv’s Gainesville High School classmate, Rex Johnson, and his wife, Frances also attended. Marv’s granddaughters displayed the greeting cards over the fireplace.

Editor’s note: In honor of Pontiac resident Marv Looney’s 90th birthday, this story is adapted from a profile published in the Sept. 15, 2010, Ozark County Times after he was honored with the Barney Douglas Citizen of the Year Award by the Gainesville Lions Club and the Distinguished Alumni Award at Gainesville High School.

In between, he earned a Ph.D. from the University of Arkansas and then worked as an assistant professor at Central Missouri State in Warrensburg, and as dean of instruction at Kellogg Community College in Battle Creek, Michigan. Next he served as president of Mahoning Community College in Youngstown, Ohio, and then as president of Missouri Western in St. Joseph, and next as chancellor of the University of Alaska-Anchorage.

He tried to retire after the Alaska post but in 1990 agreed to serve “six months or so” as interim dean of the SMSU-West Plains campus as it was getting organized.

He stayed eight years, moving into the chancellor’s role and overseeing significant increases in campus size and student enrollment. Colleagues learned to expect Marv to take regular trips to Jefferson City, where he worked the legislators relentlessly to provide greater support for the West Plains campus.

During his tenure at SMSU-WP, he also served as president of the West Plains Chamber of Commerce and helped the town raise funds for a new multipurpose civic center.

He commuted daily to West Plains from the Pontiac home he shared with his wife, Dorsey, who died in 2011. By the time he retired for good, the odometer on Lincoln vehicle showed 285,000 miles.

Four blue stars in the window

He walked to the Gainesville school, then located where today’s post office stands,  all 12 years—sometimes taking a trail over the hill east of the Gainesville square when Lick Creek was too high cross except at what is now the Barney Douglas Bridge.

He graduated from Gainesville High School in 1945 and wanted to go to college but couldn’t afford the $2-per-credit-hour tuition at what was then the Southwest Missouri State Teachers College—which became SMS, then SMSU, and eventually Missouri State University.

World War II had started when Marv was a high school freshman. Since he couldn’t go to college, he enlisted in the Navy, signing up for the “duration of the emergency.”

Before the war ended, four of the Looney brothers would serve in the military simultaneously. “Our mother had four blue stars hanging in the window,” Marv said.

After his honorable discharge in 1946 he enrolled in SMS on the GI bill. To visit his family back home, he rode the bus when he had enough money for a ticket and hitchhiked when he didn’t.

As soon as he was eligible to teach, in 1949, he began teaching at GHS—algebra, trig, geometry and P.E. while also coaching both boys and girls basketball teams. He returned to Springfield in the summer to finish his bachelor’s degree in 1950.

In 1951 in California, he met Delores Robbins, an Ozark County girl known as Dorsey, while he was visiting relatives there. Dorsey’s parents, San and Gertie Robbins, had moved their family of eight girls and one boy from Ozark County to California during the Depression and ended up living next door to another Ozark Countian, Marv’s brother Harley Looney.

Marv invited Delores to go to the fair in Quincy, California, for their first date. “She said yes, but when I went to pick her up, she said I’d have to get her dad’s OK first – but he wasn’t home. He and (another Ozark Countian) Dick Trump were up in the woods somewhere watching for deer. So we piled in their stationwagon with Dorsey’s mom and all the kids and drove up there. I hiked to the top of a mountain and got within maybe 20 yards of her dad and hollered up there to ask if I could take Dorsey to the fair,” Marv said. “He hollered back that he guessed it was OK.”

They were married in July 1951 after the Robbins family moved back to Ozark County. One of Marv’s high school classmates, Rex Johnson, was one of their witnesses. Marv had told Dorsey if she’d marry him, he’d take her on a cruise for their honeymoon.

“We were married in Mountain Home, and then I made good on my promise,” Marv said. “I drove her home by way of the ferry across Lake Norfork.”

Moving on to higher education

Marv continued teaching here at Gainesville and then moved to Forsyth to teach there a couple of years. Then he and Dorsey moved back so Marv could resume teaching and coaching; they also bought the Rod and Gun Resort, a small motel near Pontiac.

In 1959 they moved to Fayetteville so Marv could earn a Ph.D. from the University of Arkansas. He finished his coursework in 1961 and stepped out into a future that took him and his family to college campuses from Ohio and Michigan to Alaska and Missouri.

He and Dorsey have three sons, Doug and wife Ronnee of Colorado, Bill and wife Sandy of Pontiac, and Chris and wife Kate of St. Joseph, seven granddaughters and one step-grandson and several great-grandkids

In 1970 they built their house in Pontiac as a vacation home and lived there full time after coming home from Alaska. In 1998 Marv managed to stay permanently retired.

He holds an honorary Doctor of Law degree from Missouri Western as well as a host of other honors, including the SMSU Outstanding Alumni Award, given to him in 1977. Buildings are named for Marv at both Missouri Western in St. Joseph and at MSU - West Plains.

He’s a member of the First Christian Church and is always ready to share a story and a laugh with his many friends and relatives. Birthday greetings may be mailed to him at 136 Looney Lane, Pontiac, MO 65729.