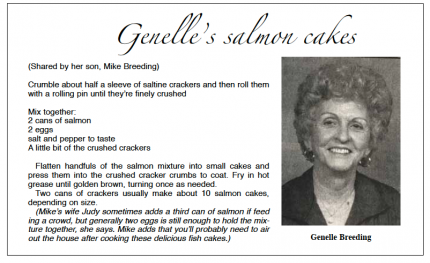 The late Genelle Breeding is remembered by scores of Ozark Countians, and former Ozark Countians, as a beloved elementary teacher whose fun-loving ways made learning fun. Those who weren’t fortunate enough to have been a student in her classroom (or one of the one-room schools where she taught in the 1940s) may remember her for her tasty contributions at area events when a potluck meal was part of the gathering. For many, Genelle’s salmon cakes were the highlight of the dinner.

She told her family she didn’t learn to cook from her mother, Delphia McDonald, who owned the A. D. McDonald store on the Gainesville square with her husband, Alva (the building now houses the Ozark County Historium). Instead, she learned to cook after her marriage to Benton Breeding when they lived with his grandmother, Margaret Webster, known to her family as “Ma.”

After Genelle died in March 2005, it just seemed fitting that her family would continue taking her salmon cakes to some of the traditional gatherings they attended, especially the Decoration Day dinner at Center Point Cemetery, where many of her husband, Benton’s, relatives are buried. Genelle’s adult children Mike Breeding and his wife, Judy, and Faunlee Harle and husband Fred often attended, and Judy usually made Genelle’s salmon cakes to the potluck.

But one year, Judy was unable to attend, and Mike confidently carried on the tradition – to some family members’ surprise. He proudly brought his mom’s salmon cakes to the dinner, and most folks bragged on him for duplicating Genelle’s recipe to perfection. However, one cousin gently pointed out that Mike’s version of the recipe resulted in salmon cakes that bigger and fatter than Genelle’s originals. “You need to pat them down harder so they’re thinner and smaller,” she said.

Mike promised to work harder on downsizing the cakes but says it’s a challenge because his hands are too big. Nonetheless, he now makes the salmon cakes for at-home occasions as well as the Center Point Decoration Day dinner. And he says he’s happy to share the simple but tasty recipe (above) in memory of his mom.

Genelle’s recipe, story and photo will be included in the 2017 edition of Ozark County Cookin’, which will feature stories and recipes of other Ozark County cooks, present and past, whose kitchen talents created warm, enduring memories for generations of area families. As we do each year, we’re asking our readers to share their memories and recipes from Ozark County’s best cooks. But please hurry. The deadline for submitting recipes is Friday, Nov. 3.

Send your family’s recipes, stories and a photo to be published Nov. 15 in our glossy-cover,  magazine-style Ozark County Cookin’, which will have color on every page. We’ll draw a name from all those all the recipe submitters, and that person will win a check for $100 – just in time for Christmas shopping!

This year’s cookbook will be distributed free at the Times office, Town & Country Supermarket in Gainesville, Cash Saver Pantry in Theodosia and anywhere the Times is sold.

The 2017 edition of Ozark County Cookin’ is also an ideal way for area merchants and groups to advertise their Christmastime and year-round merchandise because it will be kept and used for months, even years, to come. A portion of the advertising proceeds will be donated to local charities.

To submit a recipe, tribute and photo, email them to norene@ozarkcountytimes.com, mail them to the Times at P.O. Box 188, Gainesville, MO 65655 (let us know if the photo needs to be returned) or bring them by our office on the Gainesville square. Call us at 679-4641 if you need more information or if you need help putting your recipe or tribute together.