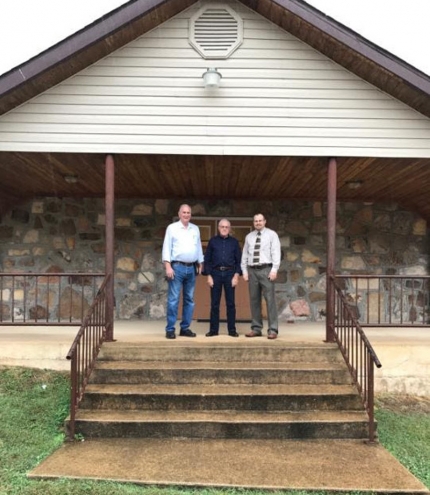 Elijah Church of Christ minister Cody Mayberry, right, stands at the front door of the church with members, from left, Doug Bean and Donald Joice. 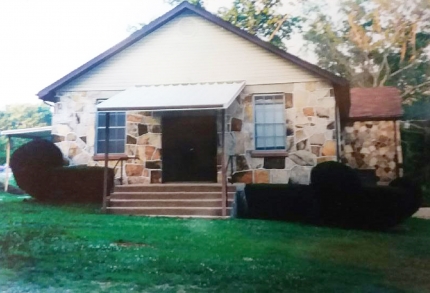 This photo shows the current appearance of the Elijah Church of Christ building on V Highway west of Bakersfield. 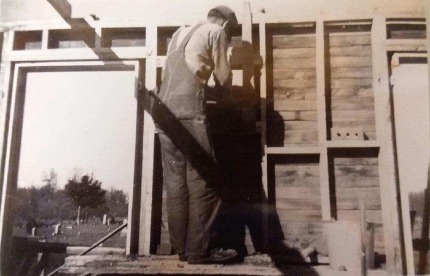 Tommy Spoon is shown working on the Elijah church’s native-rock building sometime in the late 1930s or early 1940s. 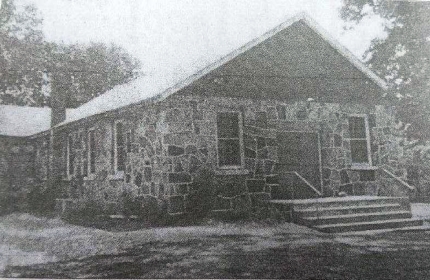 This photo of the original rock building that houses the Elijah Church of Christ accompanied a story about the congregation's history that was published in the Feb. 13, 1975, edition of the Ozark County Times.

Editor’s note: This article about Elijah Church of Christ has been adapted by Carol Pendergrass from a Feb. 13, 1975, story by Thelma Killion and Joyce Essex that was published in the Ozark County Times.

Elijah Church of Christ will celebrate the 100th anniversary of its move to its current site on  Sunday, Nov. 5, with a homecoming service and other activities. Everyone is welcome to join the congregation in celebrating this landmark event. Church service will begin at 10 a.m. with a potluck lunch and refreshments following the service.

At 1:30 p.m., an assembly will be held to present the history of the church, with time for visiting and recalling the past. At 3 p.m., the evening church service will begin.

The church will host a gospel meeting Nov. 5-8 with Joel Carey as speaker. After the 3 p.m. Nov. 5 service, evening services will be held at 7 p.m. through Wednesday.

Although the church is celebrating its 100th anniversary on the current site, the Elijah Church of Christ actually got its start more than 130 years ago, on Nov. 23, 1885, when Peter and Frances Spoon donated approximately one and a half acres of land for school, church and cemetery purposes in an area where, 20 years later, George S. Harden would establish a post office named for his young son,  Elijah. On the land donated by the Spoon family, a log building was erected, and here a Church of Christ congregation first met in 1885. The congregation continued to hold services in the log structure until it burned sometime around 1916. During these years, the congregation became known as the Elijah Church of Christ.

After the fire, the land reverted back to the Spoon heirs. Then, in 1917, the Spoon heirs C. A. and Maude Beach and Ed and Sara Stewart sold the land to the elders of the church for $10. The church elders,  J.A. Thompson, I.W. Essex and J.B. Harden, agreed that the land would be used for a church building and that the cemetery would be a public burial ground for all the community.

After the land was reacquired for church purposes, a frame structure was built, and late in 1917, the congregation, which had been meeting in the Fairview schoolhouse, returned “home.”

The Spoon log structure had served as a school for only a brief time, followed by the Fairview schoolhouse, which became the only school in the community. After the new church building was completed, the Spoon Cemetery became known as the Elijah Cemetery.

In the late 1930s, work began on a building to replace the old frame church building that had been built in 1917. The old structure was torn down by Charles Boswell,  who bought the lumber from the dismantled building and took it to his farm, where it had originally been cut from trees on his land. He reused the lumber to build a structure on his farm.

Among the men who worked on the new, native-stone Elijah church building, which has a full basement,  were John Roberts, the general contractor; Tommy Spoon, the stonemason; and Bill Essex, who did the electric wiring. Lee Olen Tackett and Burl Lee Roberts, then young men in the community, helped the builders as needed. Many others also volunteered their help, and the building was completed in the 1940s.

In the 1960s, three classrooms and a baptistery were added as well as central heating and air conditioning. The floor was carpeted and furnishings were added, including upholstered pews. The kitchen was also completed at that time.

In 2009, the building was expanded with the addition of a structure on the front of the building that includes a foyer, a nursery and two bathrooms. A handicap-access ramp was added on the north side of the building, and the kitchen in the fellowship hall was updated.

The congregation continues to hold regular weekly gatherings in the church. Sunday services begin with Bible study at 10 a.m., followed by worship at 10:45. Sunday evening service is at 5 p.m., and Wednesday Bible service begins at 7 p.m. Everyone is welcome.