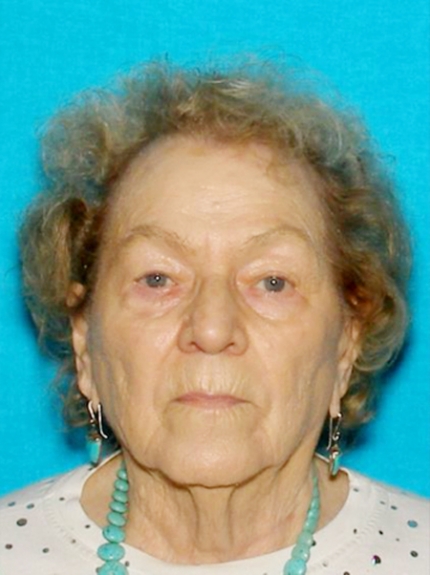 Friends and family are mourning the tragic death of Ozark County native Dixie Bertram Adair, 86, whose body was found near the Oklahoma-Kansas border Thursday night, Oct. 12, after she was reported missing the previous Monday evening.

Adair, who was born in Elijah and graduated from Gainesville High School in 1950, lived most of her adult life in Kansas. An avid duplicate bridge player with a Silver Life Master ranking, she had participated in a weekend bridge tournament at the Kansas Star Casino in Mulvane, Kansas, her niece, Gina Bertram Hoffman, told the Times Monday in an online message.

The casino told authorities that Adair had checked out of the casino hotel at 10:20 a.m. Monday, Oct. 9, and left alone in her 2011 Toyota Camry, heading west toward US Highway 81, which runs parallel to I-35 between Mulvane and Wichita to the north.

When Adair failed to answer her cell phone in response to calls from her son, Brett Adair, he reported her missing late Monday afternoon. In response, the Kansas Bureau of Investigation on Tuesday issued a Silver Alert, a statewide notification that an elderly person is missing. The alert noted that Adair had a heart condition and took medication.

The search continued, and on Thursday, Adair’s nephew, Bryan Adair of Broken Arrow, Oklahoma, and his girlfriend, Jen Wells, flew to the area in his airplane to assist with the search. They spotted his aunt’s car at the end of an abandoned muddy road, but Adair was not in the car.

Tulsa, Oklahoma, television station KJRH reported that, in response to finding the car, law enforcement officers “brought out drones, bloodhounds and a tracking team, ultimately confirming the worst.” Adair’s body “was found about 8 p.m. Thursday perhaps 200 feet north of her abandoned car,” according to a report by the Wichita Eagle, citing Sumner County (Kansas) Sheriff’s Capt. Mike Westmoreland. He said there was no indication of foul play and it appeared that Adair “became confused and wandered from her car before collapsing,” according to the Eagle.

“I think she took a wrong turn, was lost and then the car got stuck in the mud,” Hoffman told the Times. “Her cell phone was dead. A really awful situation.”

Adair’s obituary appears on page 8 of this week’s Times.