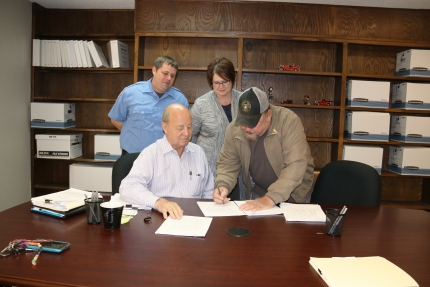 Members of the Ozark County Ambulance District signed paperwork Tuesday, agreeing to a $300,000 loan that will finance the construction of a new ambulance base on the same site as the district’s current building, which was condemned after hazardous mold was detected there in late 2015.

Board president Ray Peter said the board procured a $300,000 loan from Central Bank of the Ozarks in Nixa to construct the 1,680-square-foot building. The new structure, which will include office space, sleeping rooms for ambulance personnel, two bathrooms and a conference room, will be about half the size of the district’s current building. “But that’s all we could afford,” Peter said.

Earlier this year, voters turned down a proposed tax levy increase for the ambulance district.

After ambulance personnel complained of health problems in 2015 and earlier, the district brought in a hazmat specialist to look for problems in the old building on County Road 806 west of the Ozark County Sheriff’s Office. The hazmat inspector found elevated levels of nine types of hazardous mold throughout the building, a native stone and concrete structure that is thought to be at least 75 years old. The inspector recommended that the structure be demolished, and the ambulance district is currently soliciting bids for its demolition. (See the ad on page 10 of this week’s Times.)

Since the building was condemned, ambulance personnel have been working out of a three-bedroom mobile home that was set up behind the current, condemned building on the district’s property.

Peter said that, in addition to the loan, the district has made arrangements with Morton Building Co. and Municipal Development & Funding to construct the new building. “Then we’ll rent it from them for 15 years for $24,000 a year, and at the end of those 15 years, we’ll own the building,” he said.

Ambulance district board members tried to negotiate funding locally, said Peter, but they were not successful. He doesn’t yet know when the new building might be completed. “First we have to tear down the old building. Then we’ll get to work on the new one,” he said.

He added that the county is lucky to have the dedicated professionals who work for the ambulance district. “We’re lucky they’re staying with us,” he said. “They don’t make half of what they could make in Springfield or some of those bigger places. We’re lucky to have them; I’ll tell you that.”