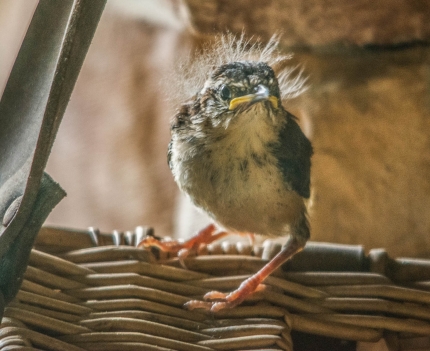 With its short, stubby tail and wispy tufts of new feathers topping its head and sticking out from the back of its neck, the first wren fledgling looked a little bit like an alien. 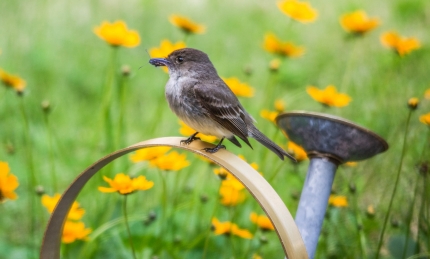 Now that the wren family has moved on, the other porch nesters, the Phoebes, can again perch in peace on the watering can.

It’s quiet on the front porch this afternoon, and a little bit lonely, after the clamor of the morning. A pair of Carolina Wrens have been nesting in a creel that hangs from one of the porch pillars, and lately, they’ve been scrambling to keep their nestlings fed. My first indication that this might be Fledge Day was an aerial scuffle over the patio. A Phoebe, who is also nesting on the porch, landed on the watering can, and the two smaller birds teamed up to chase it away. Up til now, the Phoebes had been getting the upper hand in those skirmishes, but on this day the Carolina Wrens wanted to clear the runways for take-offs and landings.

This morning, both of the wrens were on the creel, peering down the opening, coaxing their nestlings to come out. The Carolina Wren has a beautiful voice, and it must be very persuasive because it wasn’t long before the first brave adventurer popped out to greet the world. It looked around, wide-eyed. With its short, stubby tail and wispy tufts of new feathers topping its head and sticking out from the back of its neck, it looked a little bit like an alien. One sibling joined him, then another and then a third, before the first one tried out its wings.

I held my breath. The fledgling fluttered unsteadily to the woodpile on one end of the porch where the others joined him. Between crash landings, they practiced hops from log to log...hid in an old egg basket... and clung to the rock siding, all the while emitting a constant chatter. But there were still chirps coming from the basket, and finally, a fifth tardy bird emerged.

They left one by one within about 20 minutes, winging their way along the side of the house as if they’d been practicing for days. I went outside later and heard their chirps coming from under the doghouse and saw one of the parents swoop in with food. This vast world can be intimidating.

We’ll be keeping our ears and eyes open, and hoping they’ll return for another nesting.

Now, at least, the Phoebes can have their perch back.