My first turkey hunt has lasted a lifetime 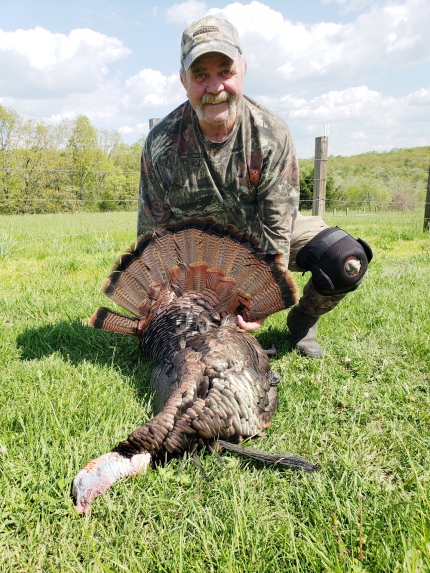 Tommie Taylor shows one of the turkeys he killed during a recent hunting season. This one had four beards. His wife Donnis told the Times, “I can’t even imagine all the men he’s taken turkey hunting” in the 52 years since this story started.

Editor’s note: Ozark County native Tommie Taylor retired in 2016 after working for the county in different jobs for more than 20 years. He and his wife, Donnis, live in Gainesville.

My turkey hunting story started when I was 14 years old. My friend Dale Chisam was working on my family’s barn one early spring day. I went out to say hi and visit a minute, and while we were talking, an ol’ gobbler turkey gobbled just up the holler.
Dale stopped talking. Again the turkey gobbled.
With a big grin on his face, Dale said, “In a couple of weeks you’ll have to try him.”
I said, “Well, you can try him, Dale. I’ve never turkey hunted. I wouldn’t have a clue what to do to kill one.”
He answered, “You like to deer hunt, so you’d love turkey hunting. I’ll teach you.”
In a few days, Dale came back to continue working on the barn. He said, “Here, I made you something” and handed me a piece of slate just big enough to fit in my hand and a cedar stick stuck in a corncob. I just looked at it, puzzled. He laughed and said, “Let me show you.”
Dale cupped that piece of slate in his hand, took the cedar stick and slid it across the slate. Man! It sounded just like a turkey hen. “Learn that call, and then I’ll show you a couple more,” he said.
I practiced a lot for a week or so, but I wasn’t very good.
About a week after the season opened, Dale showed up one evening and asked if I’d been hunting.
I told him, “No, I’ve been busy.”
I’ll never forget how he just grinned, probably knowing the truth that I just didn’t know how to hunt turkey. He asked, “Would you like me to take you tomorrow?”
“That would be great!” I answered.
So we began getting ready. “What about your shotgun? Is it a full choke?” he asked.
“No, it’s an open choke.”
“You really need a full choke. You can shoot mine. I’ll be here at four in the morning. Have your cammo on and be ready,” Dale said.
The night went by fast. I don’t think I slept a bit. I was up and sipping coffee when Dale’s headlights appeared in the driveway. He said we would drive to the back of our place and then hunt to the front. As we headed to the back of the farm, I wanted to make sure Dale understood that I didn’t know what to do. But with his big grin, Dale assured me, “You’ll be just fine. Just do what I tell you. I’ll tell you when to shoot him.”
It was still pitch dark when we finally arrived at our starting point. Dale shut off the truck, and we got out. He handed me a cup of coffee and said, “We’ll listen!”
We stayed there in the dark, sipping coffee and not saying a word. By now, I’m beginning to think that turkey hunting isn’t for me – getting up in the middle of the night just to drive out to the middle of the woods and drink coffee. Then, as I wasthinking that, a whippoorwill landed close by and began calling. It was so loud, I was sure there was no way we were going to hear a turkey. But I looked over at Dale, and he whispered, “Anytime now.”
A few minutes later, an ol’ owl hooted. And then another and another. Then it was quiet again. By now I was thinking, “It don’t sound like there are any turkeys around here.”
Then an owl hooted again, and way off up the hill, a turkey gobbled. Then he gobbled again and again.
Dale said, “There he is! Let’s go get him.”
I thought to myself, “This is crazy. The turkey is at least half a mile up that hill, it’s barely daylight, and we’re going to walk over there?”
About halfway to the turkey, we made it to the top of the hill, and Dale stopped to make a call.
The ol’ turkey called right back! I was amazed.
Dale called again, and the gobbler answered  again.
Dale said, “He’s hot and on his way.”
He set me up by a tree and told me to look toward where we heard the gobbler. “Don’t move,” Dale whispered. “I’ll tell you when to shoot.”
He called again, and this time, nothing. Called again, and again nothing.
I was thinking to myself that he was calling so softly the turkey couldn’t possibly hear him. So we just sat there. By now my butt was numb, and my legs were hurting.
Then Dale called again, and the turkey gobbled right in our faces – but we couldn’t see him. I knew not to move, but where was he? Just as my heart was about to pop out of my chest, the turkey popped out from behind the brush, and POW! I shot.
The turkey flopped backward, and before I could even move, Dale was running toward the turkey. I finally got my legs under me and ran to Dale, who had a big ol’ grin on his face – and his foot on the turkey’s neck. “That sure was a long shot,” he said.
I’d been so excited I hadn’t noticed. Dale shook my hand and slapped me on the back two or three times. I think he was happier than I was. My first turkey weighed 24 pounds and had  an 11 1/2-inch beard and 1 1/4-inch spurs.
That was 52 years ago.
My friend Dale died in 1993, but I still turkey hunt every season with the same passion I had that first time he and I sat in the dark woods one morning, drinking coffee and listening. I’ve taken all my boys, some of the grandkids and many friends and their boys. I hope I have instilled the same passion in them that Dale instilled in me.
Every season is the same, yet every season is different.
Thank you, Dale.