Voting is that important 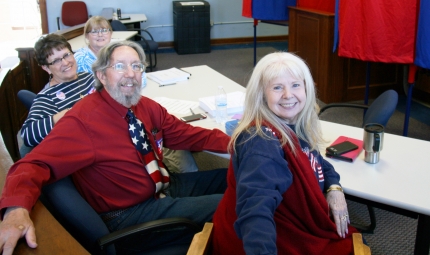 Diane White, right, has been an election judge in Bridges Precinct for five years. The job generally includes long, 14- to 15-hour workdays, but Diane says it’s a very rewarding opportunity to be a part of the election process. Shown with Diane in this November 2017 election photo are fellow Bridges Precinct election judges. From left: Renee Schmucker, Lana Cockrum and Dennis Lawson.

The Nov. 6 General Election is one for the record books. With 4,089 residents casting their ballots in Ozark County, it is one of the largest voter turnouts in recent memory.

Regardless of whether the ballot measures and elections went the way I voted, that number makes me extremely proud. If you live in Ozark County, it should make you proud too.

A recent conversation with my husband’s aunt, Diane White, who has served as an election judge in the Bridges Precinct for five years, gave me a whole new perspective on just how important that number is.

The Bridges Precinct poling place is the courtroom in the Ozark County Courthouse. Diane said oftentimes the line stretched out the courtroom door, down the staircase and  around the hallway. She said, as an election judge, she really gets to see the people, from all walks of life, who take time out of their day to cast their vote.

“It seems like they all understand just how important it is,” she said.

There were adult children holding the wrinkled hands of elderly parents and grandparents, who shuffled their feet, slow and steady, up the steps to cast their votes.

There were a lot of young voters, and more first-time voters than she ever remembers in her time as an election judge. All were eager and proud to participate.

There were some elderly residents who just could not physically make their way into the courthouse basement to ride the elevator up to the courtroom where they typically mark their ballot. But they still showed up at the courthouse on election day. They called the clerk’s office and asked for an election judge to come to them in their car to cast their ballot.

There were residents waiting in line when the judges took those calls. The people in line patiently waited while the judges paused the voting line to walk down two flights of stairs and out of the building to reach the parking space where they handed a ballot to the residents who could not make it inside to cast their votes. Not one waiting complained.

But she said the most powerful moment for her came when she noticed an older gentleman wearing a Korean War cap sitting on the wooden pew outside the courtroom. He was winded and looked very tired.

He told Diane he needed to rest and would make it inside when he could to do his civic duty. She told him she’d bring the ballot to him.

“I fought for our right to vote,” he said as he tipped his hat. “As long as I can move, I will be here to vote.”

As she watched him make his way back to his vehicle, a process that took nearly 30 minutes, she thought, He understands how important this is.