A shout-out to those other dads, especially one, in particular 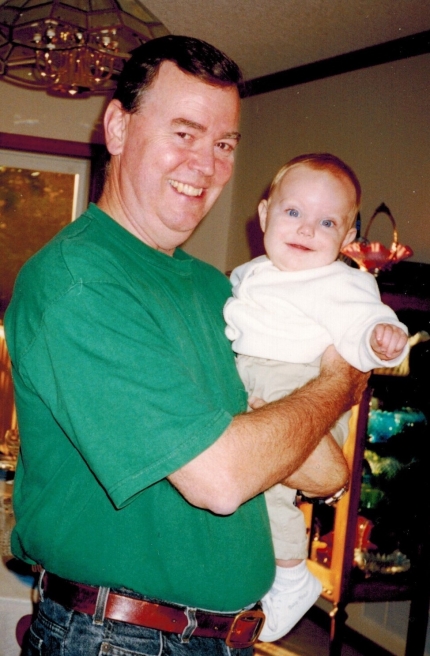 Times editor Sue Ann Jones says Mike Sparks, shown in this 1998 photo with his step-granddaughter Madeline Kahl, is “the best stepdad I know.”

But now that the “real” Father’s Day has passed, I’d like to acknowledge those men who aren’t dads because of a birth, but because of a marriage. Or an adoption. Or the goodness of a heart that leads a man to serve as a parent in the foster system. Here’s to all those dads out there who are helping to raise other men’s children, and doing it with love.

And, in particular, here’s a shout-out to the best stepdad I know, my brother-in-law, Mike Sparks.

It was a lucky day for our family 40-plus years ago when he met my sister – I call her M.R. – several months after her first marriage ended. She had two kids who were elbowing their way through adolescence, headed into the turbulent teenage years. And who wouldn’t be thrilled to suddenly become a stepdad to two kids during that insanity-invoking stage?

Plus, Mike also had a daughter of his own who lived with her mother in another state, and she, too, would soon be a teenager.

All three of those kids had birth parents who loved and nurtured them, but for a lot of the time during their crazy teenage years, it was Mike who was in the trenches at Ground Zero helping provide love and support for the young dynamos who could be, well, typical crazy teenagers.

As I recall, there was once a neighbor’s call asking M.R. and Mike, “Do you know there are kids on your roof?” Then there were the calls about car crashes and assorted consequences of really bad decisions. Mike was there for all of those hair-raising, heart-pounding, turbulent-stage incidents, but also for the moments of accomplishment and pride: the competitions and performances, graduations and awards, birthdays and weddings.

Somehow – probably through prayer, given that Mike’s always been a church-going, choir-singing man – he managed to keep his sanity and survive all three kids’ boundary-pushing teenage and college years. Through it all, he somehow knew when to step in and be the strong support his wife (and ex-wife) needed – and when to step back and let the kids’ mothers deal with whatever situation was unfolding.

It couldn’t have been easy. Mike is retired Army, Ranger trained, someone who, throughout his long military career, was accustomed to taking the lead and resolving problems. But he had the perfect way of sensing when his duty was to stand by in silent support rather than to intervene in direct combat.

Mike’s devotion to the military continues now, years after his retirement, as he volunteers as a docent at the World War I Museum in Kansas City. He and my sister also operate a low-key business of selling military collectibles, in which Mike excels because he knows the story of how every piece was used, worn or earned. His devoted service to our country inspired his stepdaughter Kay, a nurse, to join the Army Reserves even before 9/11.

Mike also taught his stepson John to scuba dive when he was a teenager, and they shared adventures on exotic reefs far and wide. He guided and encouraged his daughter Lauren as she completed college and worked her way up the retail ladder to become the manager of a big major-brand store in Texas.

In the last two decades of his 40-year connection with our family, Mike’s also been there to support my sister and the kids through heartbreaking times as well – deaths of loved ones, breakups with spouses, challenges from unexpected setbacks.

Today, all three of the kids Mike helped raise are wonderful, exemplary adults leading productive, successful lives while parenting kids of their own. And all three adore Mike. Some of their children think he’s pretty awesome too. I love how an incident that happened 20 years ago illustrates that affection.

When John and his wife, Kaki, were planning the baptism of their first baby, Madeline, all the grandparents – “real” and step – were there. But instead of standing with the parents and other grandparents in front of the congregation during the baptism, Mike, in his familiar, deferential way, quietly chose to stay in his usual place, seated in the choir, to let the “real” family members have their moment.

All went as planned with the water and the words, and toddler Madeline was a little angel – until she spotted her “Papa” sitting a few yards away in the choir. Then the yelling, crying and squirming began as she loudly expressed her urgent need to get to him.

Eventually, the family group expanded to include a tall man wearing a choir robe holding a happy little girl, content in her Papa’s arms.

Madeline’s 21 now, soon to be a senior in college. It’s hard to see her now and imagine her as that Papa-loving toddler in the beautiful white baptism dress – until you see her face light up whenever Papa and Mama arrive. Then you know the feeling is just as strong as it was all those years ago.

So here’s a post-Father’s Day shout-out to all those other dads, like Mike, who earned a special place in the lives of children who share their hearts but not their genes, whose connection to someone else’s kids became a brand-new family bond. Those kids’ world – everyone’s world – is so much better because of the love you shared. God bless all of you!