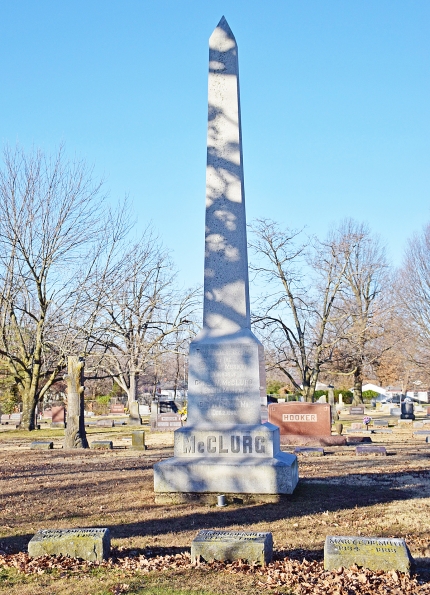 James McClurg, who in 1842 carved the Salt Road through the Ozarks wilderness from Jacksonport, Arkansas, to Springfield, Missouri, also served as a US Congressman and later as Missouri governor. He died in 1900 and is buried in Lebanon City Cemetery, where his grave is marked by this impressive marker. 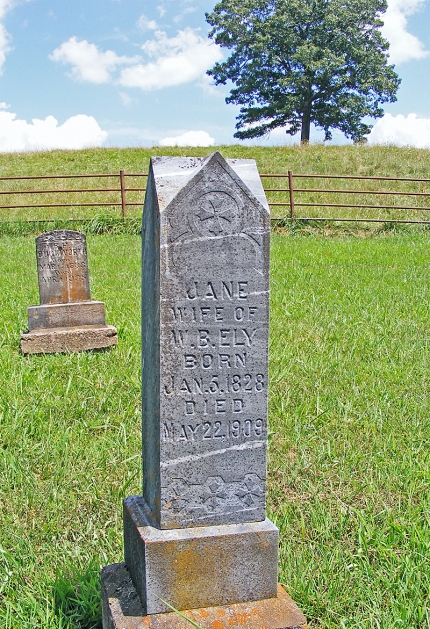 After settling on land near what is now Haskins Ford in 1858, Ozark County pioneers Jane and Mansfield Duckworth fled from Civil War marauders by traveling north on the Salt Road. After Mansfield died in 1863 while serving in the Union Army, Jane returned to Ozark County, settling near Piland’s Store, now known as Thornfield, perhaps because she felt safer in the area protected by the 46th Regiment of the Missouri Volunteer Infantry commanded by Capt. William Piland. After the Civil War, she married W. B. Ely. She died in 1909 and is buried in the Duckworth Cemetery north- west of Thornfield. 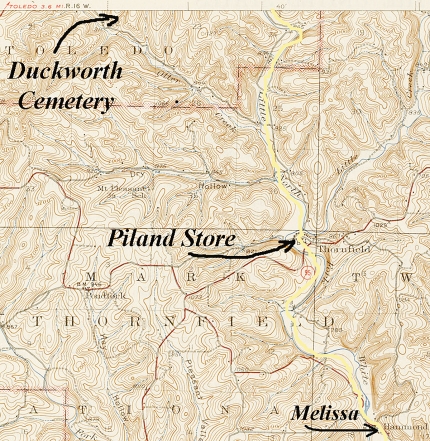 McClurg’s Salt Road followed the Little North Fork of the White River as it made its way from the community of Melissa (now Hammond) past Piland’s Store (now Thornfield) and northwestward into Douglas County.

Editor’s note: This is the conclusion of Wayne Sayles’ story about the Old Salt Road, a rugged trail carved through the Ozarks by Joseph McClurg in 1842 to transport salt he had purchased in New Orleans to be sold in the market in Springfield. McClurg shipped the salt by steamboat to Jacksonport, Arkansas. From there, he created a sometimes- t reacherous road over which oxen-draw wagons hauled the salt northwestward. Part 3 of the story, published in last week’s Times, followed the road’s path from what is now the community of Isabella up to and along the Little North Fork of the White River as far as Hammond, a community originally known as Melissa. This week’s final installment traces the road from that location into Douglas County and on to Springfield.

During the Civil War, the lives and property of settlers along the Little North Fork of the White River were in serious peril. Many, in fact most, settlers left the area and fled north to more densely inhabited areas that offered greater security. One of these families was that of Mansfield and Jane McCullough Duckworth, who married in 1852 in Ozark County and had their first child, William Goforth Duckworth, in 1854. A daughter, Martha Ann, was born here in 1856.

In 1858, the Duckworths purchased and settled on 40 acres of land a short distance upstream on Barren Fork east of the Salt Road crossing over the Little North Fork at what is now Haskins Ford. That property is now part of the Army Corps of Engineers land adjacent to the Kyle farm on County Road 829. The Duckworths’ third child, Pleasant, was born there in 1859. He was named after his maternal grandfather, Pleasant McCullough, who served as Ozark County Sheriff. The couple’s fourth child, Oliver Perry, was also born there in January 1861.

The Duckworths were peacefully clearing their land and raising a family when the Civil War broke out in April 1861. At that time, Mansfield served in Company A of a local militia known as the Home Guard. With Ozark County being repeatedly ravaged by marauders who stole or killed livestock, burned homes and tried their best to eradicate adult males, the Duckworths packed their belongings and headed north with their four youngsters on the Salt Road. They eventually found relative safety in Dallas County.

Tragically, Mansfield died Jan. 27, 1863, while serving with the Union Army, leaving Jane on her own with four children, the oldest less than 9 years old. She was then pregnant with her fifth child.

It was the middle of winter. Jane gathered the family’s belongings and headed back toward her family in Ozark County and the land she and Mansfield had left behind.

She got as far as the site where Otter Creek empties into the Little North Fork above what is now Thornfield. There, in a one-room log cabin, she either decided, or was forced by nature, to make that spot their new home. The Duckworths’ fifth child, Mansfield Jane (named after her father and mother) was born in Ozark County, apparently at Otter Creek, shortly after her father’s death.

In between Jane Duckworth’s new home and the marauders who came up from Arkansas, a community was developing north of Melissa (now Hammond) at one of the Salt Road’s bottomland river crossings. Among the early families settling in that area were the Pilands, who established a trading post there at the confluence of Little Creek and the Little North Fork. The emerging community was known simply as Piland’s Store; it later became the village of Thornfield.

At least seven men of the Piland family served in the Home Guard during the Civil War. They not only protected their own property but also that of their neighbors. Capt. William J. Piland commanded the 46th Regiment of the Missouri Volunteer Infantry. In a letter from “Davis Mills, Ozark County” dated Feb. 17, 1865, Captain Piland wrote to his superior, General Sanborn, asking for guidance on how to deal with marauders in the area.

The general’s reply to Piland, as often is the case between generals and captains, was short and sweet: “You are stationed in that section of country to preserve order and protect the persons and property of all living there, and will not fail to do everything necessary to accomplish these results,” Sanborn replied. “Dispose of all robbers in the most summary manner.”

Piland followed the general’s orders, and one can understand why Jane Duckworth might have felt safe at Otter Creek.

The Civil War ended, and Jane married W. B. Ely in 1894. Jane died in 1909 and is buried in the Duckworth Cemetery, a serene spot near Otter Creek.

The Salt Road north from Piland’s Store (now Thornfield) was slightly less dramatic than its passage through southern Ozark County, but fords were still necessary. The road continued to follow the Little North Fork about 4 miles to the fork where the community of Benner was established in 1898. In 1910, Benner was renamed Toledo. Little remains of the community there today. Most of the land in that area is now part of the Mark Twain National Forest. There the main stream of Little North Fork flowed in from the east, originating in the area where Squires was later founded. A smaller branch entered from the northwest, which was, of course, the direction McClurg headed. That route is followed today by County Road 945, which takes the most direct route to the Douglas County line and the present community of Smallett, some 6 miles northwest.

In Douglas County, the Salt Road passed from Smallett to Red Bank and then northward along what is now O Highway to Dogwood. There it turned west toward Sparta along current State Highway 14.

It passed north of Ozark in Christian County and went by the Kenton post office (now the community of Linden) before reaching White Oak Grove (now Rogersville) and finally reaching Springfield.

Traveling this road was an arduous journey, to say the least, but few roads competed with it until near the end of the 19th century. It was still in use when Joseph McClurg died on Dec. 2, 1900, and many sections of that pioneer road became the foundation for later roads we travel every day.

In 1861, McClurg served as a colonel in the Union Army, commanding the 8th Missouri Volunteer Cavalry. Ironically, Confederate forces frequently used his Salt Road during the Civil War to attack Union forces in Missouri. He was elected to the U.S. Congress in 1862 and then was elected as Missouri’s 19th governor in 1869. He spent his final years as a civil servant in Springfield, registering Homestead Act transactions throughout the Ozarks. He was buried in the Lebanon City Cemetery, where his grave is marked by an impressive monument to his life and work.