This long-time helper could use a little help 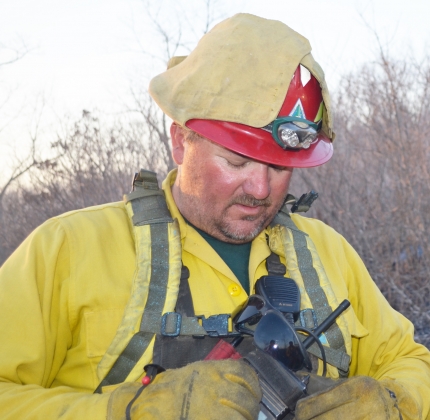 Greg Watts has served with the Bakersfield Volunteer Fire Department for 28 years, since 1989. He’s been BVFD chief since 1992.

That’s 28 years of answering calls that have come in the middle of the night. In the middle of Christmas dinner. In the middle of holding one of his three little girls, including 8-month-old Kacy. In the middle of doing dozens of things he would probably rather do than leave his home and his family and head out to somebody’s fire. Or car crash. Or low-blood-sugar episode. Or some remote home where somebody “just doesn’t feel right” or has fallen and can’t get up.

It’s what all of Ozark County’s volunteer firefighters and first responders do, and Greg told me recently he certainly doesn’t expect anything in return. “The way I look at it, it’s all about helping the people. We don’t ask for nothing in return,” he said.

They “don’t ask for nothing,” but here’s something to consider: the Bakersfield department is down to six people. Six. And two of them are Greg and his wife, Zaylor, the parents of those three little girls.

For the last month or so, even that small roster has been reduced because Greg, the chief, has been laid up with health problems. During gall bladder surgery Sept. 1, he had a bad reaction to the anesthesia. For a while, he couldn’t move his legs. Doctors were stumped, and things looked pretty dire. It looked like he might have to be transferred to a St. Louis hospital. But finally, thankfully, his legs started to work again, although he’s still a little shaky at times.

Greg’s on the mend now – which should be excellent news to you Bakersfield residents who appreciate it when someone answers your calls for help. Greg’s doctor wanted him to wait until Oct. 15 to go back to his forestry job with the Missouri Department of Conservation, but that was too long for Greg. He talked the doctor into agreeing that he could go back to work last week.

I just thought you Bakersfield folks might like to know your fire chief, the man who’s served his community faithfully for 28 years, has been through a rough spot. If you’d like to help, the community is holding a benefit auction at 6:30 Saturday, Oct. 21, in the Jerry Taylor Gymnasium at the Bakersfield High School. If you can donate goods to auction or spare a little cash, contact Lynn Pearson, 417-372-9938, or Carolyn McFarland, 870-425-9143. Cards and checks can be mailed to P.O. Box 138, Bakersfield, MO 65609.

Twenty-eight years is a long time of giving without asking for “nothing in return.”