Fishing at the mouth of Liner Creek 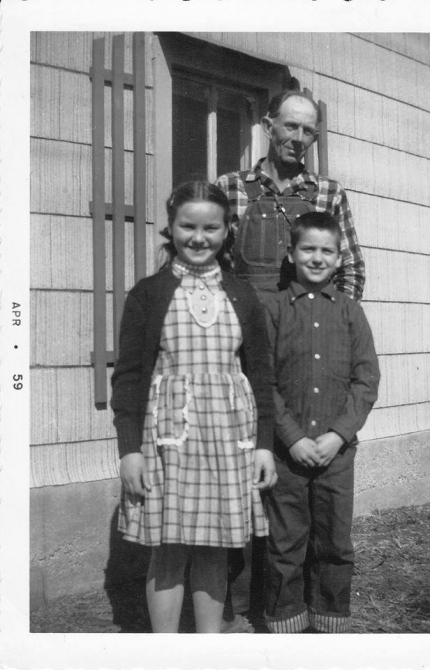 Ronnie Parsons in 1959 with his sister Gayle and their uncle Lawrence Smith, who, with his wife, Ava, raised the children after the death of their parents.

by Ronnie Parsons, Special to the Times

Leonidas Smith, which most of the folks just pronounced “Londas,” was the older brother of Lawrence Smith, my uncle who raised my sister Gayle and me. He was a neighbor and a friend of mine when I was but a child in Brixey Holler.

I remember the day Leonidas passed. I cried. He was a genuinely good and decent person through and through. I can recall one time out of the clear blue when he went back to the back of his property, just to the south of an old dug well that was on the east side of his west corn field before you cross into the middle valley. If you’ve been there, you know where I’m talking about.

He cut down a small hickory tree that had grown up beside the well, and from it he fashioned for me an archery bow and a handful of arrows. The first I had ever owned. I was so proud of them. I was probably 7 or 8 years old. I became pretty efficient with them, even though I was only killing hay bales. This story, however, is not about my bow and arrows, it’s about Leonidas, myself and Claude Young going fishing one morning at the mouth of Liner Creek on Norfork Lake.

The day before we left, Claude and I set some minnow traps in the old pond across from Ralph Young’s home and adjacent to Fred Smith’s home near Gainesville. I never did figure the connection to us and the pond. I hope it was OK that we trapped the minnows. Anyway, we soon had an abundance of minnows and crawdads. So on Saturday morning, Claude, Leonidas and me headed out to the lake, minnow buckets full and fishing rods in our hands. I had to slap the rooster off his perch before we left because it was even too early for him to crow about much of anything.

Claude drove, I slept and Leonidas kept Claude awake. He was never without words if he was enjoying himself, and that morning he was. We arrived at the lake just after daylight, and Leonidas and I put Claude into his wheelchair and wheeled him down to the water’s edge. It was a considerable slope down, so when we got to the edge, we had to “scotch up the wheels” on the lower side of the chair to level him out.

Later, Leonidas was out looking for lures and scouting the water’s edge, and I was fishing for perch when I saw Claude reaching out over the water with his fishing rod as if to point to the other side of the lake. Then he yanked on it to set the hook.

I jumped up and yelled for Leonidas, and we headed toward Claude at a dead run. Leonidas’ run was more dead than mine, of course, as he was considerable older.

Claude was holding onto the upper wheel of his wheelchair with one hand and cramming the handle of his fishing rod into the spokes of his lower wheel with the other hand when Leonidas and I arrived to rescue him. We got the wheelchair back up on the rocks, and all was well.

Without a word, Claude took his fishing rod out of the spokes of his chair and started reeling in. Now, folks, that is another story in and of itself. When he got it reeled in, he had a line-side bass on one of the hooks and a Jack salmon on the other. Both were nice fish. The only fish caught that day.

That, my friends, was just another one of the adventuresome days spent in the lives of the Brixey Holler Bunch. I loved it, and I love the memories.