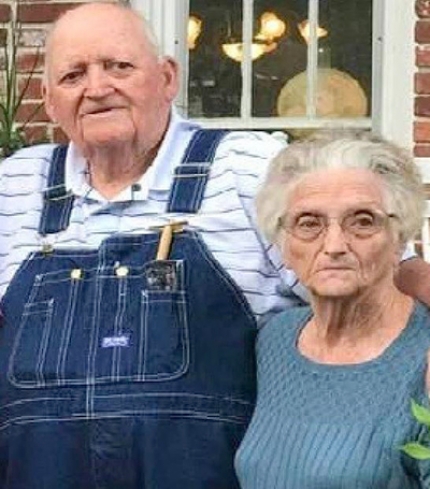 A memorial service for Garry Leroy Garrison, 85, and his wife, Bonnie Loretta Todd Garrison, 84,  of Marshfield, formerly of Noland’s Point, will be held at 10 a.m. Saturday, June 19, 2021, at Friendship Cemetery in Springdale, Ark-ansas.

Bonnie Todd Garrison was born Jan. 29, 1937, in Springdale, the daughter of Clyde Earl and Rosa Elvira Alexander Todd. She grew up in Springdale and met her husband there.

Garry L. Garrison was born May 26, 1935, in Springdale, the son of Earl Kelso Garrison Sr. and Mary Ella Robinson Garrison.

During Mr. Garrison’s 20-year career in the Marine Corps, he served one tour in the Korean War and two tours in the Vietnam War. During those years, Mrs. Garrison was both mom and dad to their sons many times, and she was also considered a mom to their friends. The Garrisons traveled many places during their years as a Marine Corps family, including Southern Carolina, Hawaii, California and Colorado.

In 1970, while serving his last years in the military in North Carolina, Mr. Garrison moved his family to Ava. After rejoining his family in Ava, he was hired to help set up the new Walmart store there. After the store opened, he continued working in the sporting goods and other sections before retiring.

The Garrisons then moved to Noland’s Point, near Ocie, where Mr. Garrison enjoyed his hobby of fishing; he went on to become a licensed fishing guide. They moved back to Ava for a while then moved to Marshfield to be near their son, Melvin.

They are survived by their two sons, Dale L. Garrison and wife Sheila of Norwood, and Melvin A. Garrison, formerly of Thornfield, and wife Marlana, now living in Marshfield; four grandchildren; 10 great-grandchildren; and two great-great-granddaughters.

They were preceded in death by their parents and a great-grandson, Luke Ryan Tompkins.

Mr. Garrison was also preceded in death by a brother, Dale R. Garrison, who was killed in the Korean War; and sisters Juanita Elliot and husband Leroy, Merle Bookout and husband Ralph, Leila McCarty and husband Doyle, and Laura Allen and husband Robert.