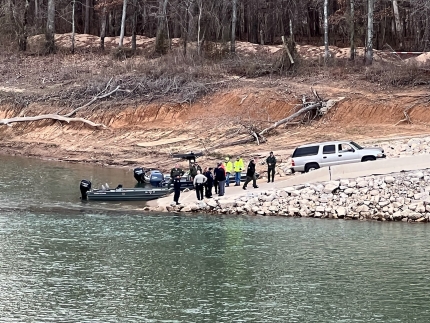 The Tecumseh access boat ramp was closed during the search so that boats could be launched by emergency responders. 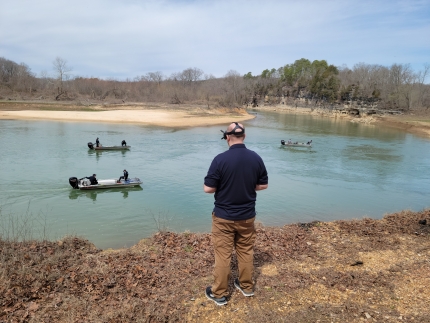 Emergency responders from Missouri State Highway Patrol, Ozark County Sheriff’s Department, local volunteer fire departments and other agencies responded to the Norfork Lake access at Tecumseh March 25 after a man was found on a gravel island and said his boat had capsized early that morning. He said did not know where his two fellow boat passengers were. In this photo, Ozark County Sheriff’s Department Administrative Assistant Curtis Ledbetter is shown with his back to the camera wearing goggles that project the view of a drone he is flying through the area in an attempt to try and locate the missing men. Members of the Missouri State Highway Patrol and Missouri Department of Conservation are pictured in boats on the lake searching the water for the men. 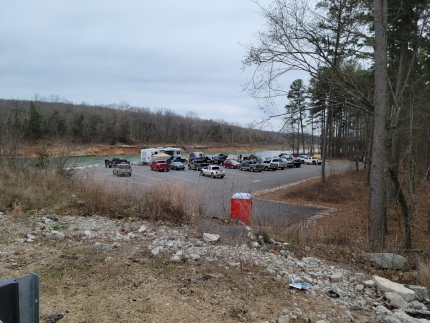 Emergency responders from Missouri State Highway Patrol, Ozark County Sheriff’s Department, local volunteer fire departments and other agencies used the Tecumseh access on Norfork Lake as a base to conduct their varying duties in attempting to locate two missing men last Friday and Saturday. The access was closed to the public during that time. 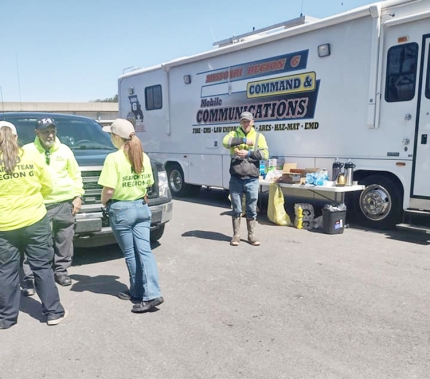 The Missouri Region G Search and Rescue Team responded with their search dogs and extensive search command center. Sheriff Cass Martin said the team’s search dogs detected the scent of one of the missing men under the water, which led to the recovery of that man’s body. 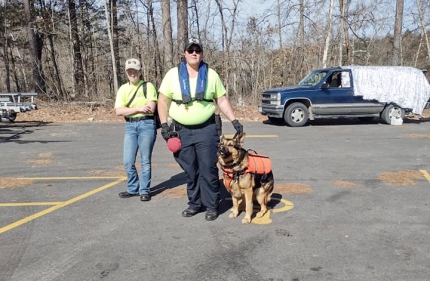 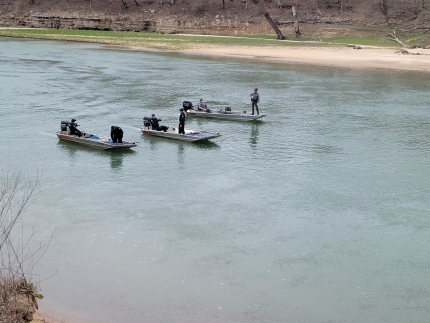 The search process involved search by land, water and air. Emergency personnel worked to search the bottom of the lake using a dragging device. Sonar and other under water techniques were also utilized.

It was around 8 a.m. last Friday, March 25, when the Ozark County dispatch office received a call from a couple fishermen who had put their boat in the Norfork Lake access at Tecumseh and, after motoring north a few hundred yards, found a man stranded on a gravel island. The island was surrounded by water near an area that locals call “the forks,” where the North Fork of the White River and Bryant Creek converge and flow into Norfork Lake.

The man, 38-year-old Dora resident Shannon Newton, reportedly told the fishermen that he’d swam to the island after a jon boat capsized at 3:30 a.m. that pitch-black morning, throwing himself and his two friends, 32-year-old Michael Dunlap of Norwood and 60-year-old Robert D. Smith of Drury, out into the frigid water.

Newton had been on the gravel island for the five hours since the incident, and he did not know where his fellow boat passengers were. Officers later determined that the boat overturned after it hit a log extending from the bank in the swift current of the river.

“[Newton] could tell us where the boat capsized, and he said the last thing that he saw was one of the individuals swimming out to help the other one [in the lake],” Ozark County Sheriff Cass Martin told the Times, referring to the two other passengers in the boat with Newton. Neither of the two individuals made it back to the gravel island, Newton said.

The Tecumseh access was shut down Friday morning and used as a command center for the dozens of emergency agencies who helped with the search. Boaters who were already on the water were allowed to exit the lake one-at-a-time, but no other residents or boaters were allowed to enter the access.

The capsized boat was found floating upside down about 80 to 100 yards north of the Tecumseh bridge. It was removed by a local towing company.

A representative with the U.S. Army Corps of Engineers, the agency which owns and operates the land around Norfork Lake and Tecumseh access, was notified and put a boat in at Henderson, Arkansas, and motored to the search location to help try to find the missing men.

“We were doing it all. We had drones. We had guys in the water. We had guys searching the area where the boat had capsized in case they’d gotten on land then gotten lost or wandered into the woods along there,” Martin said referencing the group effort from all the agencies helping with the search. “We searched land, air and water.”

Searchers contacted all homeowners in the area to ensure the missing men hadn’t walked to a lakeside home after the boat crash, but no residents had seen the men. Volunteers with local fire departments walked the edges of the lake for miles. A tackle box was located at Bridges Creek access, known locally as the “stump hole,” but there was little else found from the boat or its occupants.

At 5:30 p.m., about 14 hours after the incident, the body of 60-year-old Robert Smith was discovered under the water about 40 yards downstream from where the boat overturned. Ozark County Coroner Gene Britt pronounced Smith dead at 5:42 p.m.

The search for Dunlap continued until about 9 p.m. when emergency crews called it quits for the night after 18 to 19 hours of searching.

“It got to the point that it was unsafe for our first responders to be out there on the water after dark,” Martin said. “We didn’t want one of our guys to get hurt, so we discontinued efforts until daylight.”

Crews were back out searching for Dunlap around 6:30 a.m. Saturday morning, March 26.

Dunlap’s body was found under the water of Norfork Lake at 11:28 a.m., about 80 yards from where the boat capsized.

Martin said it was the Region G Search and Rescue team, a group of dedicated volunteers with highly-trained search dogs, who led the discovery by seeing something on sonar and deploying one of their trained search dogs, who “alerted” to a specific area where the dog had picked up the man’s scent, even though the body was submerged deep under the water. The Missouri State Highway Patrol dive team was then deployed at the area where the dog gave the alert, and the body was found and recovered.

Officers located and notified both of the deceased men’s next-of-kin, and the bodies were taken to a local funeral home.

A celebration of life ceremony for Smith, under the direction of Clinkingbeard Funeral Home of Ava, is set for 2 p.m. Saturday, April 2, at New Hope Cemetery in Drury. See obituary, page 8.

At press time Tuesday, arrangements for Dunlap were pending under the direction of Craig-Hurtt Funeral Home of Mountain Grove.