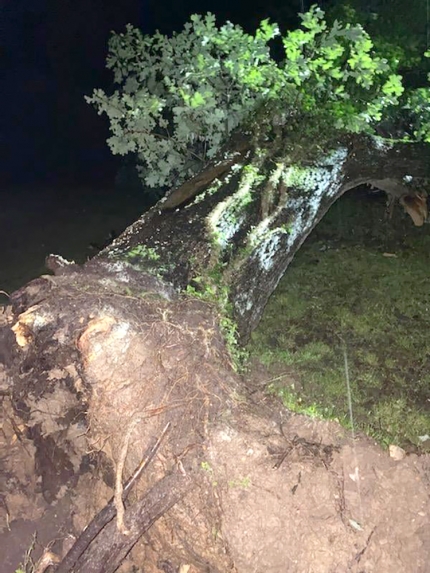 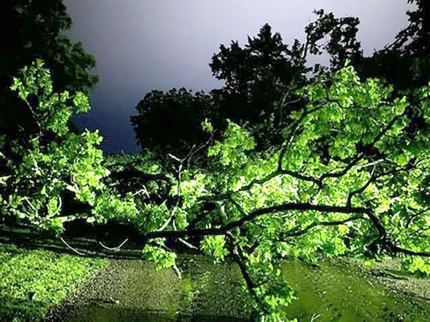 Ozark County’s Road and Bridge crews were busy through the weekend and early this week cleaning up debris from a Friday, June 11, storm.

“They were out to two or three o’clock in the morning Friday into Saturday. Then [they] worked all Saturday and back out Sunday,” Presiding Commissioner John Turner said during the commissioners’ meeting Monday morning.

The storm, which left many Ozark Countians without power and with downed trees blocking their way on driveways, county roads and highways, made a significant impact on the area.

“It was a solid roar, a lot of wind and thunder and lightning. My foreman lives in Bakersfield. He has a basement house, and he said it sounded like the tin was going to come plumb off the house,” Collins said.

The far eastern part of the county received the most damage in his district, Collins said. “The first call I had was from Darrin Evans at 9:21 [p.m.], to be exact. He said Gene Britt had a big tree down by his house,” Collins said. “We couldn’t even fool with it that night because it was such a big tree, and lightning was going everywhere.”

Collins said he told his crew to be especially careful of downed power lines, and if there were any in the area, to leave the trees where they were until they knew it was safe.

Western District Commissioner Layne Nance said he told his road and bridge employees the same thing. Nance said he was out with his crews until around midnight Friday assessing damage and moving debris to clear roadways.

“I told them, ‘Let’s just wait until daylight. I can’t chance someone getting hurt. You might pull up on one of those trees and not even realize there’s a power line down out there in the dark with it raining like that, and we’re not qualified for that,’” Nance said. “So I said to wait until morning and then we could reevaluate. All in all, they spent all day [Sunday] making sure everything was passable. We’re going around now and starting to clean stuff up.”

Nance said the damage in his district hit the northwestern corner of Ozark County.

“Theodosia to Longrun to Thornfield, Glade Top and . . . I’ve gotten two calls already this morning,” Nance said, referring to two phone calls the commissioners took just before their meeting from residents who reported downed trees and limbs. “I didn’t know of any structures that were damaged, but there was a lot of trees down.”

Turner said someone flagged him down over the weekend to tell him that the Missouri state flag was dangling from the flagpole on the courthouse lawn, and when he came to look at it, he noticed the cables for the fasteners for the American flag were also damaged.

“Rob Collins [of D&D Signs] is coming up this morning to take a look at it. The little cables holding it to the big cable snapped, so we’re going to have to replace those to get the flags back up,” Turner said.