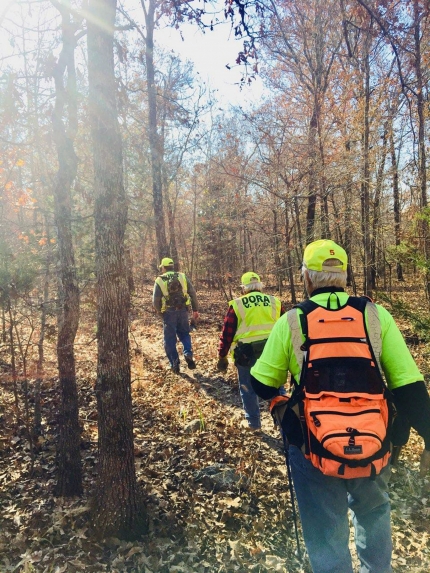 Dora Volunteer Fire Department members Monte Shipley, front, followed by John Epley and John Stanton, along with Jeremy McKee, who took this photo, formed one of three teams that responded Sunday morning to search for a hunter in the Devil’s Backbone area of Mark Twain National Forest who had not returned to camp the previous evening. The searchers soon learned that the hunter had made it back to camp. DVFD posted this photo on its Facebook page, noting, “Nice day for a search in the Devil’s Backbone Wilderness.”

Three search parties, including one from the Dora Volunteer Fire Department, were called out Sunday morning to look for a hunter who spent the night in the rugged Devil’s Backbone Wilderness of Mark Twain National Forest near Dora.

Dora VFD chief Monte Shipley said the man, Reese Mason, 67, got separated from his son, Clint Mason, while they were hunting in the national forest Saturday evening. It’s not known where the pair are from.

Although Reese Mason  carried fire-building materials, he did not have a flashlight, Shipley said, and as darkness fell, he realized he wouldn’t be able to find his way back to their camp. He called his son to say he would spend the night in the woods and would make it back to camp Sunday morning. The son was able to get map coordinates from the cell phone call, and his father told him he would stay at that spot overnight.

When his father didn’t show up promptly Sunday morning and didn’t answer his cell phone, the son called authorities for help. Later it was learned the father’s cell phone battery was dead, Shipley said. Apparently the son’s cell phone also died during the ordeal.

Pottersville VFD requested mutual aid from Dora VFD, and two Pottersville search-and-rescue teams and one Dora team converged on the Collins Ridge area of Devil’s Backbone off KK Highway – along with a Missouri State Highway patrol officer and a Missouri Department of Conservation agent.

But before the would-be rescuers had gotten far into the search, one of the Pottersville teams met up with the son, who told them that Reese Mason had returned, unharmed, to their party’s hunting camp. “The father didn’t know there was a search for him,” Shipley said.

Shipley said that, with fallen leaves covering the trails, it was understandable that someone would be unable to find his way through the darkness, especially with no flashlight and considering the extremely rugged countryside in that area.