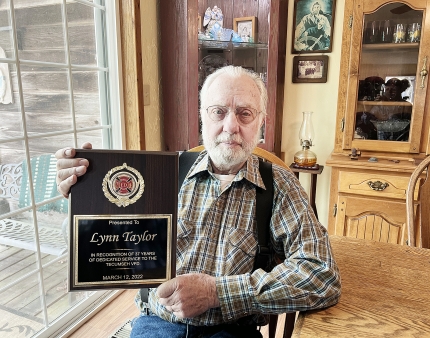 Times photo/Bruce Roberts Tecumseh firefighter Lynn Taylor shows off a plaque honoring him for his 37 years of service with the Tecumseh Volunteer Fire Department. Taylor will be 81 in a few weeks.

For soon-to-be 81-year-old Lynn Taylor, retiring from the Tecumseh Volunteer Fire Department (VFD) after 37 years just means he’s going to get to spend a little more time doing the other things he’s always enjoyed - like working on his hit-and-miss motors, tinkering with one of his antique tractors, woodworking and roller skating.

“I grew up roller skating and used to work part time at roller rinks when I was a young man in the Navy,” Taylor said. “I’ve kept it up over the years, and I always said to my wife that when I turned 80 I wanted to celebrate by having a skating party with my great-grandkids.”

So last year, when he was nearing his 80th birthday, Taylor drug out the old precision skates he paid 50 bucks for decades ago in California and “practiced around the house” in anticipation for the skating party.

But with the covid pandemic and other obstacles, it didn’t appear the 80th birthday skating party was going to happen.

“My brother came in and was going to spend some time here. I didn’t really think anything of it, because we both like old tractors, old motors and woodworking … we have a lot in common,” Taylor said. “So we got up that Sunday morning and was going to go to church in Mountain Home (Ark.), and my brother wanted to drive. That was fine with me. I enjoyed just riding. We went to church, and after church they said, ‘let’s go to West Plains to eat.’ I thought that was kind of odd since there are a number of restaurants in Mountain Home, but, again, I didn’t mind. I was just along for the ride.”

When they got to the restaurant in West Plains, there were some family members there including his granddaughter and her three kids. “Again, I didn’t really think much about it … I thought ‘this is really nice,’ but didn’t get too suspicious.”

After lunch they had agreed to come home to Tecumseh to have dessert. As they passed by the roller rink in West Plains, Lynn’s wife Charlotte said “Pull in here for a little bit.”

When they went inside Lynn discovered the surprise party in his honor, as about 40 family and friends had rented the roller rink for a few hours that evening.

“It was one of the best days of my life,” Taylor said. “They had my [favorite decades old] skates, and I got to have my 80th birthday skating party with my grandchildren and great-grandchildren. I skated for two hours to 50s and 60s music. That was special.”

Taylor was recognized recently by the Tecumseh VFD with a plaque and a dinner in his honor for the 37 years of service as a firefighter. He and his family moved to Ozark County in the summer of 1984, and he started as a firefighter in February of 1985.

“When I first started at Tecumseh, things were a lot different than they are now,” said Taylor. “I remember they had two fire trucks. They were both flathead V-8s, Fords. I don’t recall the size, but what I do remember about the one we used the most was that in front the bumper was located about two feet or so out away from the radiator and there was a platform on there and a railing across the front … because they didn’t have brush trucks. So what you did was the hose was dragged from the back of the truck, over the cab, and a man would stand on that front platform and spray the water on the fire as the other guy drove.”

“One challenging thing back then was none of the county roads had numbers,” Taylor said. “But I picked up on it pretty quick.”

“I’ve seen a lot of tragedies from fires to car wrecks,” Taylor said. “A lot of bad wrecks on the Tecumseh curves.”

Taylor said when the fire department finally got communication radio equipment it was actually better then than most of the equipment nowadays.

“These firefighter pagers are hard to hear and are staticky,” he said.

Another issue in the early days for Taylor and the fledgling fire department was the lack of volunteers. “I guess it’s not that much different than today, but there weren’t many people who would volunteer,” he said.

Taylor said he was happy to serve the county and his neighbors in the Tecumseh area.

“They asked me to be fire chief once, and I said no,” Taylor said. “The reason why is even though I had more firefighting experience and training than any of them … probably all of the others put together... I was experienced on ships where, if you have a fire you close everything down to keep the air out. Here, the first thing you do on a house fire is take an axe and chop a hole in the roof to get into it.”

Taylor started fighting fires on the prairies of central Wisconsin when he was a lad.

“Back then on those prairie grass fires, you would just grab an old burlap sack and douse it in water and beat down the fire line,” Taylor said.

More than a firefighter

Born and raised in Wisconsin, Lynn served two stints with the U.S. Navy, having been stationed in San Juan, Puerto Rico, and in the San Diego, California, area.

The highlight of his Naval career was getting to work alongside the British Royal Navy, where he spent two years living in a village near Portsmouth in southern England.

While there, he was honored to have met Prince Andrew and Prince Charles.

In fact, Taylor said, he was working a unit when Prince Andrew was coming through for his military training.

“I asked the guys [with the Royal Navy] if they were going to have anything special since he was royalty. ‘No’ they said, ‘we’ll treat him just like all the other guys’ … I said ‘yeah, the difference is he has bodyguards’… I got to thinking about it, and I thought he should have something special. I went over to the shipwright shop, and I got one of those big wooden wedges that they use to drive and wedge water leaks with, and I carved his name on it and underneath his name I carved Royal leak-stopper.”

Taylor said some of the staff presented it to Prince Andrew late one afternoon during the prince’s training. “I wasn’t there but a few days later he came through again this time for gas mask training,” Taylor said.

He said his job was to interview the trainees about their gas masks and their training. “I interviewed [Prince Andrew] and asked him the standard questions, you know, and one of those questions was where he stored the gas mask, and he said in the boot of his car, which, you know, meant the trunk of his car. He also said that at the palace sometimes the staff would take it out of the car and play football with it. After the interview was over, [Prince Andrew] started to walk off, but then he turned around and looked at me and said ‘are you the fellow that did that carving for me?’ And I said ‘yes I am’ and he said, ‘I gotta shake your hand, that was really great.’”

Taylor also recalls meeting Prince Charles. “It was in the spring of 1981 I believe … they were having the 150th anniversary at the naval station in Portsmouth. Prince Charles came in flying his own one-man helicopter, and he did a speech I remember, and the British Navy captain that I was under asked me if I had ever met Prince Charles and I said no … so he took the two of us [Taylor and wife Charlotte] and introduced us to Prince Charles. The Prince asked us where we were from, and that was when we had come there from California, and when we told him California he said ‘oh, that’s where the pretty girls are!” … That’s before he was married.”

“I’m just so thankful,” Taylor said. “And I’m thankful for my wife who’s been so supportive. Without her I wouldn’t have been able to do any of it.”

The Taylors are closing in on their 59th wedding anniversary

“We live in a great community,” Charlotte said. “We’ve been blessed.”

She recalled the time right after they moved here in late 1984 and their home then on the North Fork of the White River was flooded.

“We had so much water in our house and it was just a mess,” She said. “We had gone out of town and when we came home, we had to take two canoe trips just to get to our house. I remember we didn’t have to cook or anything for over a week because people were just bringing food to the fire house. The people have been so good.”

Lynn agreed. “It’s just a great community … some of the best people anywhere. We love being part of it.”