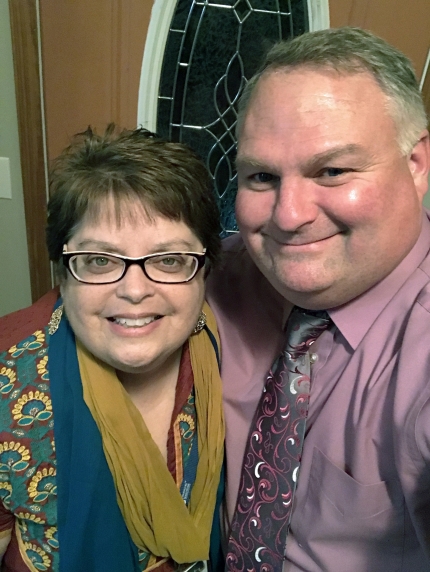 Mike Hatcher, shown here with his wife, Gretchen, is leading efforts to build a pastors retreat center west of Theodosia. The project began in 2005 when Mike was serving with the Navy in Guam and felt he'd received a message from God, directing him to Theodosia. Hatcher will tell the story of the project at 11 a.m. Sunday at The Fountain Church in Theodosia. Everyone is invited. 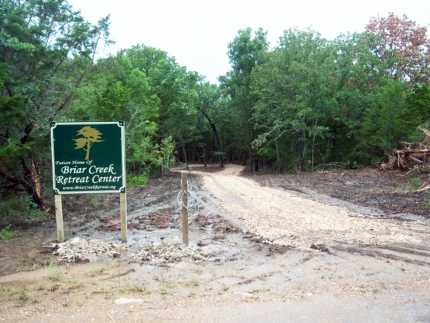 In 2007, the Hatchers purchased the Theodosia-area land where they're building the Briar Creek pastors retreat center, and a year later, they built this road leading into the property. Mike retired from the Navy in 2010, and they expected to get the retreat center built and opened soon after that. Instead, they went through a challenging "wilderness" experience that included Gretchen eventually having a kidney transplant. 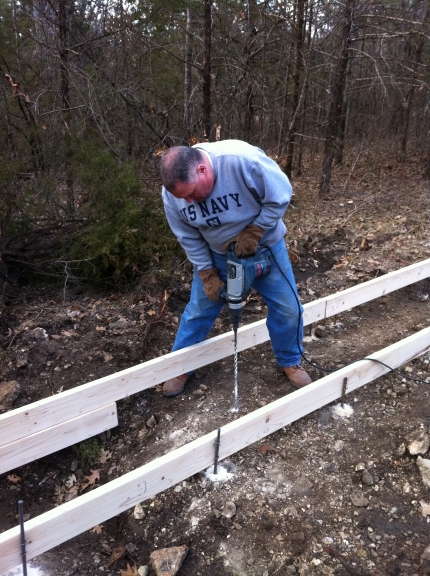 The vision for Briar Creek, a pastors retreat center that’s expected to open next year near Theodosia, began 12 years and 7,300 miles from here – in the American territory of Guam.

That’s where Navy Senior Chief Mike Hatcher, who had never been anywhere near Ozark County, says he received an unmistakable message from God. The message was, “I want you to build a pastors retreat center in Theodosia, Missouri, and name it Briar Creek.”

“I’d never heard of anyplace named Theodosia,” Mike told the Times last week. “I pulled out a road atlas and tried to find it.”

Nor was he a pastor or someone who knew anything about pastoral retreats.

Anyone else might have discounted this strange spiritual urging to do something crazy – build a retreat for pastors in a place he had never heard of or been to. But Mike and God have had a long history of crazy conversations and encounters – including several incidents that Mike considers miracles. And when you’ve routinely experienced miracles over the decades –  well, when you sense God telling you to build a pastors retreat 7,300 miles away in a place you’ve never even heard of – oh, and name it Briar Creek – you don’t ask why or how. You just say, “OK, Lord.”

Next Sunday at The Fountain Church, 4425 Highway 160 in Theodosia, Mike will tell the amazing and compelling 12-year story of the round-about way God led him to Theodosia and to the specific property where he and his family are building the pastors retreat. The church service begins at 11 a.m., and everyone is welcome. His talk will be preceded by fellowship and refreshments at 9:40 a.m. and Bible class at 10 a.m. At 10:45, attendees will share a “meet-and-greet” and prayer time before the main service begins. For more information call 712-3855 or 989-0636.

The story of Mike Hatcher’s surprising walk with the Lord began long before God sparked the Briar Creek idea in his mind. When he was in fifth grade, he was forced to wear glasses for his near-sightedness. During a revival, his eyes were miraculously healed, and years later, he eventually became a periscope operator in the Navy’s submarine service, earning the nickname “Eagle Eye” because of his skill in seeing distant objects. To this day, he has better than 20/20 vision.

Mike and his wife, Gretchen, started their marriage as devout Catholics, and wherever Mike served with the Navy and wherever they lived, they ended up in a different church denomination. After a born-again encounter with God in Italy, they believed “we needed to just be Christian,” Mike said. During their marriage they enjoyed attending an Assembly of God church, a Baptist church, an Evangelical Free Church, a nondenominational church and a Lutheran church. Their experience helped them see beyond “the stereotypes that people have built up for the different denominations,” Mike said. “Jesus loves them all.”

He had many mind-boggling experiences as he followed God’s leading through the years. He’ll tell those stories Sunday in his appearance at The Fountain Church. For instance, he’ll probably tell about the time he felt God directing him to buy groceries for a woman in a red dress. (Spoiler alert: the mission didn’t go well.) Or, in Guam, when he prayed, asking God to direct him with some groceries – and ended up following a dog to what looked like an abandoned home, where the stunned woman who answered the door asked him, “How did you know?”

After finding Theodosia in the road atlas in 2005 and seeing it was in Ozark County, Mike had subscribed to the Ozark County Times to learn more about the place where he would someday be living. He had no idea it would be more than 12 years before he could bring God’s directive into reality. All he knew back in 2005 was that it would happen.

During the summer of 2007, Mike and his family moved back to the States, settling near Seattle as Mike continued working toward his retirement to come three years later. That fall, Mike wrote to me at the Ozark County Times, telling me his story about the godly message he’d received back in 2005 telling him to build the Briar Creek pastors retreat in center Theodosia. He wanted to document that “the Lord revealed this vision before my family ever arrived” in Ozark County. And he asked if there was a Briar Creek near Theodosia.

I told him I didn’t know of a Briar Creek but noted that there are lots of little creeks and streams throughout the area. And I told him I would save the letter. I still have it.

During the long Thanksgiving weekend of 2007, Mike and Gretchen finally got the chance to visit Theodosia for the first time. They met with Theodosia Realtors Doreen Gimlen at Ozark County Realty and Don Smiley with Sierra Ozark Realty.

After looking at a few properties, they realized they would need more land than the 10-12 acres they’d originally planned because God had told Mike the retreat needed a walking trail and seven cabins, each named for a fruit of the Spirit. Doreen said a 26-acre tract had just come on the market, and when she handed them the property information sheet, the first thing Mike noticed was the Multiple Listing Service number. It was his birthdate.

As they drove down P Highway and onto an unpaved county road, Doreen explained that even though the property fronted the road, they wouldn’t be able to walk directly from the road into the property because “there are just too many briars.” Instead, they crawled under a neighbor’s fence and walked down to Little Cedar Creek, which they’d seen on the map. While crossing  another stream, Mike asked Doreen if that creek had a name; when she said she didn’t think so, Mike told Gretchen, “Well, maybe this will be Briar Creek.”

Overhearing him, Doreen turned and said, “Well, this is Briar Hollow.”

Back at Doreen’s office, Mike stepped to the back to use the restroom, and not even realizing he was praying, said, “Well, Lord, what do you think?” He felt the Lord telling him, “It’s time to plant the mustard seed.”

They bought the land.

In 2010, he retired from the Navy and found a job in Springfield. The Hatchers bought a house in Nixa, which they thought would be “a good place to be while waiting to start building Briar Creek in Ozark County,” he said.

Whenever they were in Theodosia, they usually stopped by the Treasure Gallery, where they always enjoyed visiting with owner Judy Johnson. By then, Mike had written a book about his experiences and his godly vision of building the pastors retreat. Maybe it was through Judy and the Treasure Gallery that a copy of Mike’s book ended up in the hands of a couple who saw the email address he put in his book. They contacted him to ask if they could meet him.

When they got together, they told him, “We read your book. When you went to the bathroom and the Lord told you to plant the mustard seed ... we wanted you to know that the building that was Doreen’s old office used to be our restaurant. We never knew why the Lord had given us the name for it: the Mustard Seed.”

Everything seemed to be going great, but then came the “wilderness experience” Mike and Gretchen have gone through during the last five years. Mike will talk about those remarkable times – which include starting a widows ministry in India and Gretchen’s excruciating brush with death – when he speaks Sunday at The Fountain Church.

He’ll also share the plans they have for Briar Creek, where pastors, missionaries and their families will come for free and enjoy a place of peace and beauty and reconnect with their Savior.

For more information about Briar Creek, contact Mike at briarcreekretreat@gmail.com.