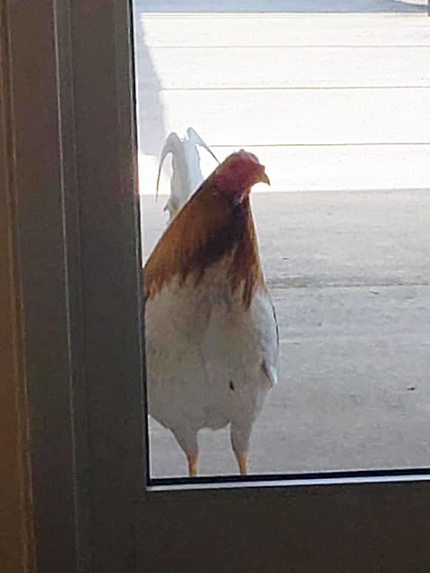 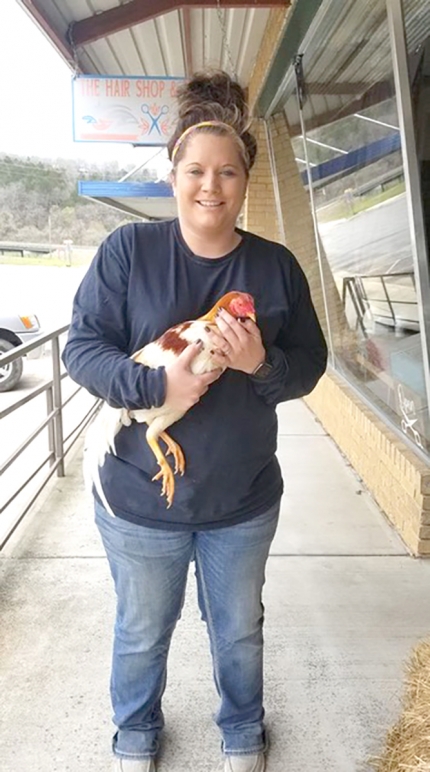 The Gainesville “bird whisperer” Above: The Hair Shop owner Mischa Kastning last week captured a rooster that had been hanging out at the Ozark County Health Department for two days. The rooster, now named Jack, lives happily at Kastning’s Brixey home with her flock of chickens. Below: This isn’t Kastning’s first time of working her magic as a “bird whisperer.” In September 2019, a friendly little blue jay became Gainesville’s town pet for a while, even riding along on the steering wheel as Century Bank of the Ozarks employee Michele Johnson drove to the post office one day for the mail. Named “Bird the Blue Jay,” the little guy especially enjoyed stopping by the Hair Shop for occasional chats with Mischa.

“I got to work on Monday morning, and we have a security device on the door that usually says, ‘Welcome. Building secured’ in a real low voice. Just as it said that, I heard a loud ‘Cocka-a-doodle-doo,’” Ozark County Health Department administrator Rhonda Suter told the Times Monday. “I thought, you know, that really sounded like a rooster.”

Suter glanced out the health department’s glass-paneled front door and saw a little white-and-orange rooster on the other side of the road.

“As soon as he spotted me, he came running across the road to me, like he wanted me to help him,” Suter said. “I looked at him and said, ‘What are you doing here?’ and he just cocked his little head to the side and looked at me.”

Suter said the persistent chicken stayed near the office the entire day, often looking through the glass door at the health department staff.

“He’d get his beak right up to the door and peck on it a few times, like he was trying to get our attention. Then he’d crow a few times,” Suter said. “He’d walk away for a minute, but then he’d be right back there looking in the door again.”

When he was still there around 2 p.m., the OCHD staff decided to share a photo of the friendly little guy on the office’s Facebook, asking, “Has anyone lost a rooster? He is at the Ozark County Health Department door.”

The post was shared more than 70 times by a variety of people who made humorous comments and jokes about the chicken, but nobody called to claim him as their own.

The staff went home that night, unsure if they’d see the rooster again or if he’d move on to another business or home.

“I walked in that morning and thought, ‘I wonder if our little friend is here,’” Suter said. “At first I didn’t hear anything. Then I heard him crow, and I thought, ‘Oh, my stars. He’s still here.’ He came running out from between the back of the health department and the building behind it.

“We had a lot of fun with him those two days. We’d be working, and someone would say they were so tired they needed to stand up to keep from falling asleep, and we’d joke that there was no chance of that with the rooster around,” Suter said.

Mischa Kastning, owner of The Hair Shop and Tanning on the southwest side of the square, had texted Suter the night before saying she would take the rooster if no one else claimed him.

“No one had said a word about it being theirs, so the next morning I texted her and told her Mr. Rooster is still here,” Suter said.

Kastning and a friend came up the street to the health department, and after a short chase, they were able to finally snatch him up.

“I didn’t want him to get hurt or killed by any other animals,” Kastning told the Times. “He wasn’t by the building when I went up there, so I went looking around, and Ellen Collins was with me.”

The pair decided it would be better to split up so they could cover more ground.

“She went one way, and I went another,” Kastning said. “Sure enough, we found him.”

Then the chase was on.

“I ran after him through the backyard [of the health department], around the front and finally got him as he was trying to run through a wood pile,” Kastning said. “Everyone that was on break at Town & country was cheering me on.”

Kastning secured the bird under her arm and headed back to the beauty shop.

“It was kind of funny walking him back to the shop,” Kastning said. “People driving by and eating at Smokin’ Joes were looking and laughing. One person ran out and said, ‘Only you, Chicken Lady!’”

The incident adds to Kastning’s growing reputation as a  “bird whisperer.” In September 2019, when a friendly little blue jay hung around Gainesville for a while, fluttering in for brief visits with residents and merchants, one of his favorite stops seemed to be The Hair Shop, where he and Kastning struck up a friendship. Their photo was published in the Times.

After making the walk back to the salon, Kastning, who still had a full set of clients to see that day, set the rooster up in a comfortable box in the back of the building.

“I just so happened to have a bag of chicken feed in Old Blue, my vehicle, so I gave him some feed and let him rest back there,” she said. “Poor guy was starving.”

The rooster settled in his temporary cage in the salon, but every once in awhile, he called out to remind his new owner he was there.

“He crowed a few times, made for good conversation and lots of laughs,” she said. “It’s never a dull moment in the shop. So no one was too surprised.”

By the end of the day, the little rooster in the box had earned a new nickname.

After an exciting day, Kastning and her new rooster made their way back to their Brixey home.