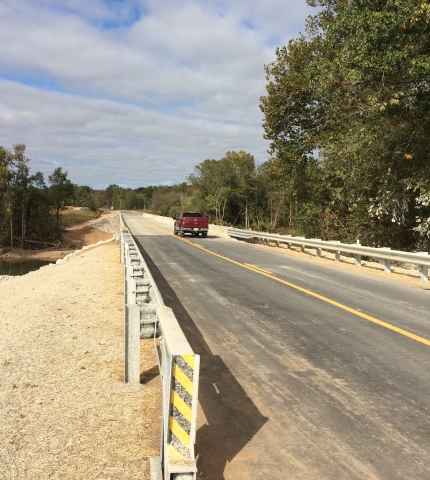 Photo courtesy Clarkson Construction Larry Tilson was the first area resident to drive across James Bridge on PP Highway last week when the rebuilt bridge reopened after being washed away in the spring floods.

Larry Tilson was only too happy to oblige about 3:30 p.m. last Wednesday, Oct. 11, when members of the Clarkson Construction crew invited him to be the “first legal crosser” to drive across the newly completed James Bridge on Highway PP near Dawt.

Tilson, who lives in the familiar blue house on PP Highway overlooking the bridge, has had a front-row seat this year as the Kansas City-based construction company completed what many consider  to be an impressively fast job. The original bridge over the North Fork of the White River was swept away during historic floods that wreaked havoc throughout the county on April 29-30. Clarkson was contracted June 29 by the Missouri Department of Transportation to rebuild the James Bridge and also another flood-destroyed bridge over the North Fork on CC Highway southeast of Dora. That bridge, named for the late Irwin C. Cudworth, opened Oct. 4. The James Bridge contract was for about $2.6 million, and the CC Highway bridge was for $2.7 million.

James Bridge was also completed last week except for the roadway guardrails, which couldn’t be installed until large sections of the old bridge, deposited on the downstream riverbank by the floodwaters, could be cut up and hauled away. That work required a few more days, resulting in this week’s opening, said Robert Fry, Clarkson’s general manager of operations.

Tilson watched as a subcontractor cut up the old bridge into “bars” and loaded them to the legal transportation weight onto trucks to be hauled to a metal recycler. “They had an excavator with special snippers that snipped the steel in half,” he said. “They would snip out a piece and  lay it out in order, and then they loaded them onto trailers with sides on them.”

He was told that at least one batch of the steel was to be hauled to Jonesboro, Arkansas, for recycling.

The completed bridge means Tilson can once again drive his preferred route to West Plains – up PP Highway to H Highway to CC Highway and through the Mark Twain National Forest. He took that route Saturday “just so I could cross both bridges,” he said.

James Bridge was rebuilt faster than Tilson could get all the flood damage to his house repaired. “It’s somewhat back to normal. We’re living in it, but there’s still a lot of work to do,” he said, adding that Clarkson workers had “put a yard in for me” on his land that edges the river where part of the old bridge landed. “They have it seeded and everything, but now the grass has just got to come up,” he said.

‘One more cup of coffee’

Residents who live on the opposite side of the river from Tilson are also delighted to have the bridge reopened. One of them is Park Place Realty agent Roy Johnson, who lives with his wife, Charlene, on James Lane. “I crossed it Wednesday evening,” Johnson said. “It appears to be put together well, and it’s smooth and nice. I actually didn’t think it could be rebuilt before the first of the year, so this was good.”

Some residents who live on the north side of the bridge had been driving rough-and-rugged Jerry Corp Lane and County Road 318 to cross the river on the single-lane bridge at Dawt since the county reopened that bridge in August. But Johnson opted for the longer paved route, heading north on PP Highway to H Highway and then south to Highway 160. The trip added about 20 minutes to his usual morning commute to Gainesville he said.

Now that James Bridge has reopened, “I can have one more cup of coffee with my lovely wife before I have to leave for work in the morning,” he said.

But he admits the newly reopened shorter route has taken some time to get used to. Johnson laughed as he told how he’d driven to Ozark on Saturday and was coming back home Saturday evening on Highway 160 and “blew right by the turnoff to PP Highway” before he remembered the bridge had reopened. “I got about 100 yards past my turn before I realized it. Old habits die hard,” he said.

Another James Lane resident, Caroline Israel, said she and her husband, Dan, and several neighbors were so happy the bridge reopened, “You could probably hear us hootin’ and hollerin’ on Wednesday night. We had a whole texting thing going on to keep each other updated,” she said.

Like other area residents, she praised Clarkson Construction for its work on the bridge. “They did such a great job. It’s wide and beautiful, and they also did a great job with the clean-up. They graded everything and seeded it and put in great drainage,” she said.

The Israels, who are both engineers, are especially thankful for the reopening of the bridge and the shorter route to and from Highway 160 that it restores for emergency vehicles. They are active members and supporters of the Tecumseh Volunteer Fire Department, which has a firehouse on Highway 160. Dan is a first responder, so having to go around meant precious minutes lost in responding to emergencies on the other side of the river.

“They just did a fabulous job,” Caroline said again. “They worked late and worked weekends, and they did a great job with the signage. And also, now it’s just seven minutes to the post office again – instead of 20 when we had to go around.”