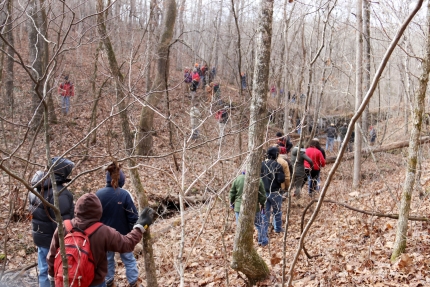 Times file photo More than 100 people in January attended a preview of newly acquired Bryant Creek State Park a few miles north of Rockbridge in Douglas County. The participants divided into different groups, including this one, that explored some of the park’s 2,917 acres. The park was closed and development plans were postponed indefinitely after the inauguration of Eric Greitens as governor. Now a public meeting is set for Dec. 5 in Ava to discuss the future of Bryant Creek State Park as well as two other parks that were announced in the closing days of former governor Jay Nixon’s administration.

A public meeting to discuss the future of Bryant Creek State Park, on N Highway in Douglas County just north of Rockbridge, will be held from 6 to 8 p.m. Tuesday, Dec. 5, in the Ava Community Center, 108 NE Second Ave. in Ava.

Other public meetings will be held regarding two other state parks that were announced in December 2016  – and were closed by Gov. Eric Greitens a few months after he was inaugurated in January 2017. Land for the parks had been purchased during Gov. Jay Nixon’s administration using funds from the ASARCO legal settlement that had been intended for cleaning up lead-contaminated areas in eastern Missouri.

A Jan. 11, 2017, story in the Times described a Jan. 8 public preview at Bryant Creek State Park that attracted about 100 people. At the preview, state naturalist Ken McCarty shared an overview of the park’s 2,917 acres, saying its northern section includes 2 miles of bluffs and hills along Bryant Creek, and its southern half includes gentler rolling hills. At the time, the Bryant Creek State Park page on the Missouri State Park website said, “with its remote, rugged wildness of deep forest and shaded hollow, the new park will offer opportunities for backcountry exploration.”

The St. Louis Post-Dispatch reported on Aug. 12 that Bryant Creek State Park and the other parks purchased and opened by former governor Jay Nixon’s administration are now closed. Department of Natural Resources spokesperson Connie Patterson told the Post-Dispatch, “there is currently no time frame or plans for construction” at any of the newly acquired parks.

The Post-Dispatch story, by reporter Jack Suntrup, said current Gov. Eric Greitens’ administration plans to leave the parks closed indefinitely. Missouri State Parks, part of the Department of Natural Resources, “has greeted further expansion of the state’s park system with skepticism, instead shifting focus to a $200 million maintenance backlog in current state parks,” Suntrup wrote, adding later in the story that “Nixon was criticized by lawmakers who said his team snapped up parcels under a shroud of secrecy while neglecting the maintenance backlog and local concerns over lost property tax revenue.”

In response to those concerns of secrecy and lost tax revenue, Thirty-third District Sen. Mike Cunningham of Rogersville sponsored legislation that requires Missouri departments to hold public meetings in areas where they plan to purchase large pieces of land.

In an opinion column published in the July 19 edition of the Times, Cunningham wrote, “For years, large amounts of land in the 33rd District were being purchased by various state departments without notifying the residents in these communities. Under this legislation, that will change. The state is now required to hold a public hearing in counties affected by land purchases. Elected officials also have to be notified, and postings must be made, on state agency websites and in newspapers.”