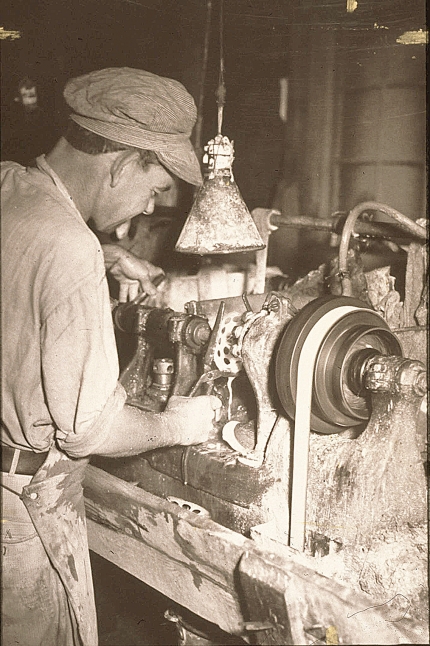 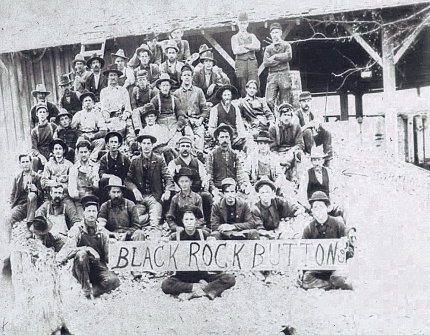 This photo, from KAIT television in Jonesboro, Arkansas, shows how buttons were made from mother of pearl that was part of freshwater mussels. 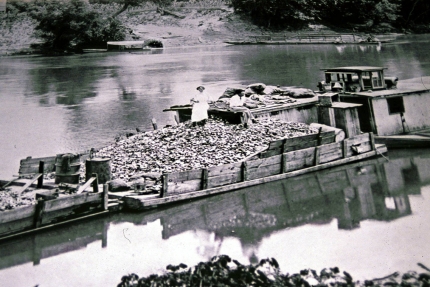 As the Pearl Rush continued, the harvesting of mussels from Ozarks rivers became a big business in some areas, including the collection of bargeloads of mussels, as shown in this photo from the Arkansas Fish and Game Department. The mussels tended to be found in huge beds with many generations of mussels forming very large piles. The pearl mania did tremendous damage to the steams, and today freshwater mussels are considered the second-most endangered species in North America.

In our constant forays online searching for tidbits of historical information, we recently came across a reference to the “Arkansas Pearl Rush.” That casual encounter led to a revelation that few today would ever have expected. Our first inclination was to assume that this was just an “Arkansas” folktale and to ignore it. After all, this continuing series is about our (Missouri) Ozark Journey. But something inside pushed me on.

It turns out that the Arkansas Pearl Rush was actually a big thing, and it did spill over into Ozark County. It was reportedly caused by a New Jersey shoemaker who found a large pearl in a New Jersey river and sold it to Tiffany & Company in New York for $1,500. This was in the 1850s, when $1,500 was more than $50,000 today. Tiffany ultimately sold that pearl to the Empress of France.

People from far and wide started searching for pearls in freshwater streams. We have some of those in Ozark County. By the 1880s, pearls had been discovered in Arkansas, and tent encampments sprang up everywhere with men, women and children engaged in mollusk harvesting. Newspapers of the day reported considerable anxiety among cotton plantation owners over the labor pool of cotton pickers being preoccupied instead with the search for pearls.

In 1895, Ed Graham of Gosport found a pearl in the White River worth $50. Two years later, Dr. J. Hamilton Meyers found a large and valuable pearl at Black Rock, Arkansas, in the Black River, which flows into northeast Arkansas from Missouri. That find set off a Pearl Rush reminiscent of the earlier Gold Rushes in California and Alaska. In fact, the region was dubbed the “Arkansas Klondike” by national newspapers.

One side effect of this Pearl Rush was an increase in the use of “mother of pearl” from mussel shells for the button industry. Buttons made of pearl had become very popular nationwide. Initially, the shells had been discarded by those searching for pearls, but the value of these shells soon became apparent, and a secondary market blossomed. In fact, the first shell-button factory was established in 1900 at Black Rock, not far south of the Missouri-Arkansas state line.

The Ozark County Times Sept. 9, 1910, edition ran a story headlined “Money in Mussel Shells” that reported, “The pearl fishers are getting rich. Shells are now selling at $20 to $22 a ton, and a candy bucket full will weigh 100 pounds.”

The story went on to say that pearl fishers were making $4 to $6 per day—a considerable income for the average worker at that time. Their work was made easier by the fact that mussels tended to be found in huge beds with many generations of mussels forming very large piles that were so deep they could not be completely exhumed. That same article reported the finding of a pearl that had sold recently in Fort Smith, Arkansas, for $2,035—more money than some Ozark area banks of the day had been founded with.

Descendants of the late Sam Martin, who operated a general store on the White River at Oakland, Arkansas, grew up hearing stories about how their great-grandfather sometimes took White River pearls in trade. He may also have used the pearls as payment for goods brought to Oakland by paddlewheel steamboats that came up the White River from the Mississippi.

That was when the Oakland area was a hub for trading cotton that grew in the area, according to former Ozark County resident Mike Breeding, Sam Martin’s great-grandson now living in Springfield. Breeding also recalls hearing about a pearl button factory that operated in Oakland during those times, and he remembers seeing, among the items his grandmother, the late Delphia Martin McDonald, once owned were shells with perfectly round holes where the mother of pearl had been cut out.

Pearls from the White River

The Gemological Institute of America classified the White River among the top seven freshwater pearl streams in the United States. Most of the press coverage at that time was related to Arkansas finds, but there was a similar search for pearls going on in Missouri along the North Fork of the White River and other streams. One example was cited in the Ozark County News of Sept. 23, 1897.  There, a piece of local news reported that “Missourians don’t have to go to Ark. to find pearls. Mr. Harris Mitchel found a pearl in White River not long ago. It is of the valuable pink tint and is estimated to be worth about thirty-five dollars.”

Two months later, in the Nov. 18 edition of the News, the Conkin family was cited jokingly in the following clip: “Lost—a beautiful frog—said frog was slightly cross-eyed and wore a light green coat trimmed in gray. When last seen, it was making rapid headway down North Fork in the direction of Arkansas. It is thought its intention was to hunt for pearls. Anyone returning the same to Miss Jarretta Conkin will be handsomely rewarded.”

In its Nov. 22, 1901, edition, the Ozark County Times reported that “the bank at Black Rock, Ark. was robbed early Wednesday of $2,000 in cash and $10,000 worth of pearls belonging to W.D. Bird. The safe was blown open with dynamite. The burglars escaped.”

A sad end to the craze

The Pearl Rush had pretty well ended by 1905 due to over-harvesting and the development of “Cultured Pearls” in Japan. Local button factories disappeared, and the craze began to fade. By then, the pearl mania had already done tremendous damage to the streams.

Sadly, freshwater mussels are today considered the second most endangered species in North America. More than 20 mollusk species have vanished from North American waters in the past century.