Ozark County Sheriff’s canine Rye gets certified, stars in her own Facebook page and is outfitted with new gear 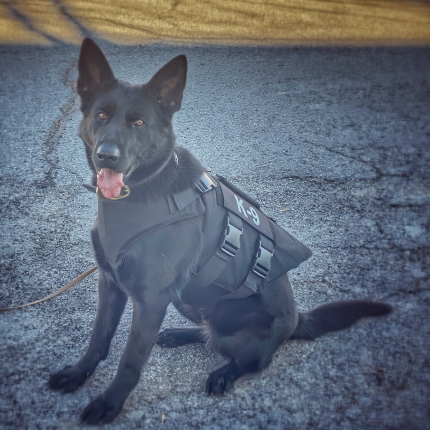 Last week the OCSD received a $3,000 donation from Caesar DePaco, a businessman and philanthropist who is known for supporting law enforcement agencies. The funds were used to outfit Ozark County Sheriff’s canine Rye with a kevlar vest, providing protection from bullets and stab wounds, and also a heat alarm for Brown’s truck, which will alert the officer if conditions inside become unsafe for Rye. 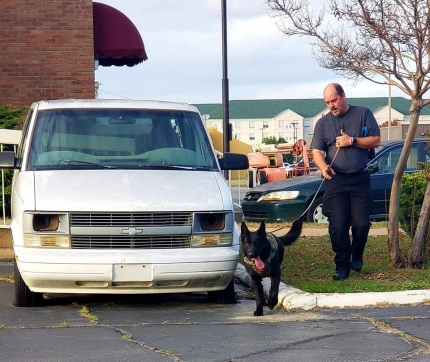 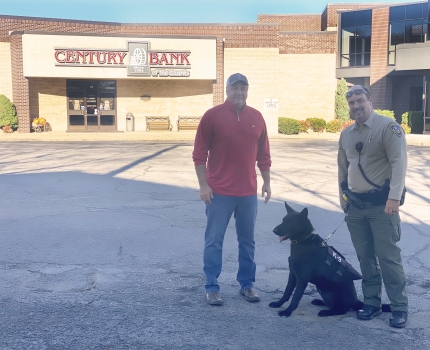 Century Bank of the Ozarks chief executive officer Chris Harlin, right, representing the Harlin family, stands with Rye and Deputy Justin Brown. John, Linda, Chris and Missy Harlin, in coordination with Century Bank, made the initial donation to purchase Rye, pay for her training and outfit a sheriff’s vehicle to accommodate the canine unit.

Brown and Rye were recently certified as a K9 team at BlueStreak K9 in Jonesboro, Arkansas. During the certification, four rooms were set up, one for each odor she’s certified in and one blank room, Brown said, adding that Rye is currently certified to detect odors of methamphetamine, cocaine and heroin. “We then had to do the same setup, only this time it was with cars. There were three cars set up, two with the odor and one without. She had to pinpoint the vehicles and rooms only with the odor of narcotics.” Rye passed all the tests, and she and Brown were certified as a team.

Last week the Ozark County Sheriff’s Department received a $3,000 donation from Caesar DePaco, a Portuguese businessman and philanthropist who is known for supporting law enforcement. The donation was used to purchase a canine bulletproof and stab-proof kevlar vest that Rye will wear while on duty. DePaco also paid for Brown’s sheriff’s truck to be outfitted with a K9 heat alarm that monitors vital components, including temperature sensors and vehicle battery voltage. If conditions become unsafe, the unit activates the horn, lights and sirens in the truck to alert the officer.

Brown and Sheriff Darrin Reed say the department is grateful for the donation from DePaco, as well as the original donation from the Harlin family and Century Bank of the Ozarks, which provided the funds for the canine and her original training.

“On behalf of the Ozark County Sheriff’s Department, I would graciously accept the donation of $3,000 from you and your organization to fund the heat alarm and the ballistic vest for our K9 Rye. As you already know, a K9 is a very crucial part of any Law Enforcement Agency. We want to make sure Rye is taken care of the best that she can be. With budget constraints and a K9 unit that is solely funded by donations, it is hard to do that at times,” Ozark County Sheriff Darrin Reed said in a letter to DePaco and his company, Summit Nutritional International.

The story of Rye

The Harlin family and Century Bank of the Ozarks offered to fund the police canine as a result of a presentation by the Ozark County Sheriff’s Department during a Lions Club meeting early this year. The donation covered the cost of the dog, her original training and outfitting a police vehicle to accommodate the canine unit.

Brown told the Times he started a new Facebook page, “K9 Rye” to provide a place where local residents can keep up with Rye and what she’s doing for the county.

“It’s going to be a fun but informative page,” Brown said.

So far the page, which has only been up for a couple weeks, features news stories about cases Rye has worked, a video of her racing and jumping into Brown’s sheriff’s department truck on her way to work, a video that shows her howling along with the police sirens inside the truck and photos and information about the pair’s recent certification (see below).

The dog lives with her handler at his home with Brown’s wife Jennifer and their two children.