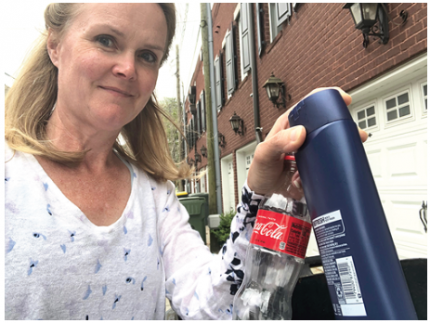 During a recent trip out of state, Gainesville resident Michelle Pointer continued her recycling habit, depositing recyclable plastics into a designated bin.

Ozark County Recycling Center manager Eric Lee, right, and employee Michael King stand in front of some of the bins of and bundles of sorted materials the center processes for recycling. 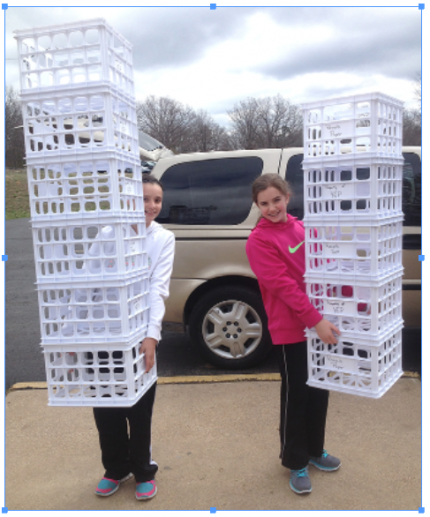 In this file photo from 2014, former Gainesville students (now graduates) Peyton Donley, left, and Blakely Morrison unload bins provided to all the school classrooms by the Youth Empowerment Project to collect paper for recycling. The bins were purchased with funds in a grant from the Ozark County Community Foundation designated for organizations promoting conservation and the environment.

Thursday is Earth Day, a time when we celebrate our beautiful planet and consider how we help it continue to be our healthy home in the universe. One way Ozark Countians contribute to that effort is by delivering trash and recyclables to the Ozark County Recycling Center on County Road 502 at Lilly Ridge.

“It’s a great asset to the county,” said Ozark County Eastern District Commissioner Gary Collins, who was also a commissioner in the early 1990s when the recycling center opened here. Collins serves as chairman of the board of the South Central Missouri Solid Waste Management Board, which oversees recycling efforts in Ozark, Howell, Oregon, Douglas, Wright, Texas and Shannon counties under the oversight of the Missouri Department of Natural Resources.

“It’s something that helps keep our county clean. It keeps a lot of trash off our roads,” Collins said. “So many people use it. It’s unreal how it’s picked up, how busy it is. I’m proud of the way it’s getting used.”

The recycling center is open from 6:30 a.m. until 4:30 p.m. Monday through Thursday. Facility manager Eric Lee said he and co-worker Michael King accept newspaper and office paper, cardboard, glass, aluminum and tin cans, plastic milk jugs, plastic soda and water bottles and other plastics marked #1 and #2, as well as appliances including washers, driers, refrigerators and microwaves.

The recycling center doesn’t accept computers and other “e-waste,” mattresses, Styrofoam, furniture, construction waste or “slick” paper such as magazines and junk mail.

Televisions are accepted for a $3 fee, toilets for $2 each. The center also accepts household trash for $2 per bag.

Trash must be bagged, and recyclers are asked to sort paper, plastics and metals into bags as well, Lee said.

Call the recycling center at 417-679-3444 for more information about what is and isn’t accepted and what fees are charged.

Gainesville resident Michelle Pointer is one of the more frequent customers at the Ozark County Recy-cling Center, and she’s also a longtime supporter of recycling in general.

Michelle said the recycling bug “bit” her 31 years ago when she was living in Arlington, Massachusetts, near Boston.

“There, everyone recycled. Whether you were in a home, office or restaurant, there were always two bins – one for trash, one for recycling,” she said in an email to the Times. “That was the first time I was around people who recycled and the first time I had given it any thought. In the Boston area, it was easy to recycle, and I was amazed how little trash I had once I started recycling.”

After she and husband David Pointer moved to Kansas City, she continued recycling, although the city did not have curbside pickup of recyclables at the time. “I collected my recyclables at home and turned them in every week at a collection site set up in the local mall’s parking lot,” she said. “I volunteered at that site for several years while we lived there. I would help people unload their cars and place their items in the large receptacles.”

When the Pointers moved to Ozark County, where David opened a law practice and Michelle became a teacher in Gainesville, “I was delighted to hear about the Ozark County Recycling Center,” Michelle said.

As founder and co-sponsor of the Youth Empowerment Project in Gainesville High School and Junior High, Michelle started a recycling program at the school and the ball parks. After receiving a grant through the Ozark County Community Foundation, an affiliate of the Community Foundation of the Ozarks, the YEP members bought recycling bins for the schools as well as bags for the bins and plastic shields to put under the bins to protect the floor.

“We also bought white milk-crate-type containers for every classroom in the elementary, junior and high school. The crates were for teachers to collect paper to be recycled,” Michelle said.

YEP members then collected the classroom paper with the help of another high school organization, the Future Business Leaders of America. Club members also prepared all the recyclables for pickup, and someone from the recycling center collected it up each week – a  limited service the center provides for large recyclers, mostly Gainesville businesses and the school.

After 11 years as a YEP co-sponsor, Michelle stepped down from the job last year. The school’s recycling program continues, but now it’s operated by students in the conservation class, which is taught by Amanda Skaggs.

In addition to years of recycling her family’s and the Pointer law office’s paper, metal and plastics, and also helping students learn about the earth-minded practice, Michelle has helped friends, co-workers and relatives start recycling as well.

One of her favorite gifts to give friends is three trash bins that fit “Wal-mart type bags,” she said, “one each for plastics, glass and tin/aluminum. That way they can easily tie up the bags when they get full.”

The bags of recyclables are then easy to toss into the car to bring to the recycling center, she said.

“I cannot imagine not recycling,” Michelle said. “To me, it is important to keep a control on the landfills. When I am traveling and have to put a can or bottle in the trash, it pains me. I think about how long it will sit in a landfill.”