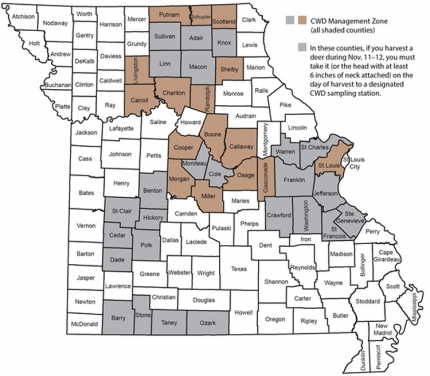 Hunters who harvest deer in any of the 25 gray-shaded counties of MDC’s CWD Management Zone, including Ozark County, during opening weekend of the fall firearms deer season Nov. 11-12 must present their harvested deer at a MDC CWD sampling station so staff can collect tissue samples to test the animals for CWD. Sampling stations here will operate at Dora School and Gainesville School. Find other counties’ sampling stations at mdc.mo.gov/cwd.

MDC will conduct mandatory CWD sampling of harvested deer Nov. 11-12 in Ozark County and 24 other counties; voluntary CWD sampling will be offered throughout the entire deer season.

The Missouri Department of Conservation needs the help of deer hunters this year to keep the deadly deer disease called chronic wasting disease from spreading to more deer in more areas of Missouri.

MDC will be conducting mandatory CWD sampling of harvested deer in 25 counties, including Ozark County, opening weekend of the fall firearms deer season, Nov. 11-12. Hunters who harvest deer in any of these counties in MDC’s CWD Management Zone during opening weekend must present their harvested deer at one of the department’s 56 CWD sampling stations so staff can collect tissue samples to test the animals for CWD.

Sampling stations in Ozark County will operate at Dora School off Highway 181 near the CC Highway east intersection, and at Gainesville School at 422 Bulldog Drive.

Ozark County is one of the counties recently added to the CWD Management Zone, which consists of counties where CWD was found previously or, as in Ozark County’s case, counties that are near where cases of CWD have been found.

Deer must be presented by the hunter who harvested the animal.

Hunters will be asked to identify the location within the county where the deer was harvested.

Deer may be field dressed before being taken to a sampling station.

Hunters can also present just the deer head with about six inches of the neck attached.

For bucks bound to a taxidermist, the cape may be removed prior to being taken to a sampling station as long as about 6 inches of the neck is left attached. Hunters may also leave the deer intact and inform staff the deer is bound for a taxidermist. Staff will complete the paperwork and inform the hunters about participating taxidermists taking CWD samples.

Hunters will be given information on getting free test results for their deer.

Telecheck the deer before going to a sampling location.

Have the completed permit information ready.

Be prepared to locate the harvest location on a map.

Position the deer in the vehicle so the head and neck are easily accessible.

Have the detached head or cape with about 6 inches of neck ready for sampling.

CWD sampling takes only a few minutes and consists of cutting an incision across the throat of the harvested deer to remove lymph nodes for testing. Tissue samples are sent to an independent lab for testing.

Opening weekend of the firearms season is the most popular two hunting days for most deer hunters in Missouri. During those two days, hunters take about a third of the state’s total annual deer harvest of about 275,000 animals.

“Focusing on this key weekend gives us the best opportunity to collect the most tissue samples during a very concentrated time period,” said MDC wildlife disease coordinator Jasmine Batten. “Prior to conducting mandatory sampling for the first time last year, we collected about 7,600 tissue samples through voluntary sampling over the entire deer season. Thanks to deer hunters, last year we collected 19,200 samples during opening-weekend mandatory sampling.”

Batten added that the increased number of samples collected gives MDC scientists a much better understanding of the distribution and prevalence of the disease – where it is and how many deer may have it. It can also help find new cases in new areas.

Find more information on CWD from the MDC website at mdc.mo.gov/cwd.