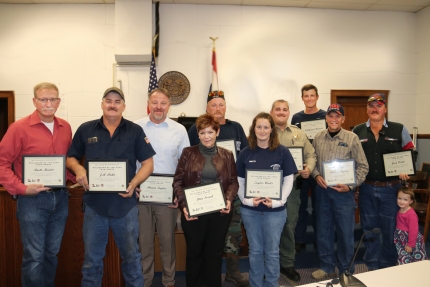 Several Ozark County emergency services volunteers, along with an Ozark County Sheriff’s deputy, were honored with the 2017 Missouri Volunteer of the Year Team Award recently at the 2017 Show Me Partnerships Emergency Human Services Conference and Volunteer Symposium in Osage Beach.

Friday afternoon, Meints presented individual Volunteer of the Year Team Award certificates to nine designated emergency responders during a brief ceremony in the Ozark County Courthouse. As a member of the “team,” Meints had also received an individual certificate from Rhoades at the state meeting. He said it is his understanding that this is one of the few times the state has recognized a team for the Volunteer of the Year Award. Usually the award goes to an individual, he said.

The award came after Meints’ wife, Jamie, wrote to the state Volunteer of the Year selection committee, describing the heroic work of the Ozark County rescuers during the April floods.

Her letter noted that “between Saturday night and Sunday morning [April 29-30] ... “multiple members from both the Tecumseh and Bakersfield fire departments stepped up to get immediate rescues done, even as their own homes were filling with water.”

She described how, after the collapse of the James Bridge on PP Highway cut the Tecumseh VFD’s district in two, Tecumseh chief Nathanael Winrod and assistant chief J. B. Duke directed operations and managed several swift-water rescues in the two separated areas.

She also described how rescuers in “small fishing boats” rescued people from the banks of the river, from their homes and even from trees and fences. They were also able to save many family pets.

One of those “fishing boat” rescuers was Shawn Taylor, who told the Times he accepted the award Friday as a shared honor with his son, Matthew. “He spent as much time as Dan Israel and I on the rescues, and when the waters receded he acted as our personal emergency manager while [Shawn’s wife] Chris and I tried to wrap our heads around what happened to our home.” The Taylors’ recently remodeled home was so badly damaged by the floodwaters that they have had to abandon it and buy another home across the river.

While Shawn and Matthew Taylor and their fellow fishing boat rescuer Dan Israel were struggling to rescue flood victims from the rising water, Dan and his wife, Caroline, also welcomed into their home several flood victims whose homes on James Lane, in the Dawt area, were swept away.

During the search-and-rescue phase, she wrote, “volunteer fire departments from across Ozark County stepped up to help check house by house or man the emergency call center.” Bakersfield VFD chief Greg Watts and firefighters Zaylor Watts and Lloyd “Punk” Stone assisted Tecumseh VFD “every day with manning the command center, search and rescue, delivering meals to residents that could not get out of their homes,” Jaime said.

Dora Volunteer Fire Department chief Monte Shipley was also singled out for pulling together a group of volunteer firefighters to help during the emergency. “Most of these guys have businesses that were flooded, ranches that lost fence lines, fields washed out or cattle scattered everywhere, but they stepped up and took care of their community first,” Jaime wrote in her letter.

She also described her husband’s work during the devastating flood. Brett Meints “was up for 40 hours straight” organizing rescues and ordering supplies and other resources. She also told how, because of bridge outages, the drive from their Thornfield home to the command center at Tecumseh VFD took Brett two and a half hours, each way, and he made the trip every day during the days following the flood “so he could help on the front lines,” helping with the house-to-house searches in addition to his emergency management duties, she said.

Shawn Taylor said Brett Meints “did an amazing job with helping us and others ... deal with the event and was always only a phone call away.”

‘Grateful to live in this county’

Although he and nine other emergency responders were singled out for praise and individual certificates, Brett told theTimes that dozens more deserved recognition as well.

“All the volunteer fire departments, the sheriff’s department – the dispatchers were unbelievable that night – and all the partner organizations, everybody stepped up,” he said. “Firefighters helped the people in their area and then came to help the departments in Dora, Tecumseh and Bakersfield, which were the hardest hit. They showed up and jumped right in. And the partner organizations – Convoy of Hope, Southern Baptist Disaster Relief and the Salvation Army that prepared all the food we distributed – they all did an amazing job.”

Taylor said that after the presentation Friday, some of the honorees discussed “how it would be impossible to acknowledge everyone in our community that volunteered during the flood and the days that followed. It is certainly one of the reasons that we all are grateful to live in this county,” he said.

One thing that impressed the state (SEMA) and federal (FEMA) officials who responded to the emergency here was the teamwork they found in Ozark County, Meints said. “That was one of the things that was told to me by several of those people. They noticed that there was no fighting here in Ozark County. No ‘I did this and you didn’t do anything.’ There was none of that here – and they said they did see some of that in other areas. So they were impressed.”

Meints had only held the voluntary emergency management director’s title about a year when the flood struck, but he isn’t new to emergency services. He spent 25 years as a career firefighter  / paramedic in Waukesha, Wisconsin, before he and Jaime moved to Ozark County about two and a half years ago.

“My previous experience was always as part of a response team,” he said. “And while I’ve had the training, as far as the command side, this was my first real experience using it. There had been other storm-damage incidents but nothing this size. And I think, overall, it went well. Of course there are always things to tweak. Every experience you have helps you create ideas for how to do things better. But overall, it went well.”

Brett stepped into the role after the Ozark County Commission advertised the position, asking for a volunteer. “They put an ad in the paper, and when I saw it, I thought, ‘Hey, I could do that.’ I went in and talked to the commissioners, and they gave me the job.”

Meints and the other emergency responders who rushed to help when the floods hit “selflessly sacrificed so much,” Jaime wrote in her letter. “Their quick actions, teamwork, compassion and love for their community is why there were no fatalities in Ozark County during or after the flooding.”