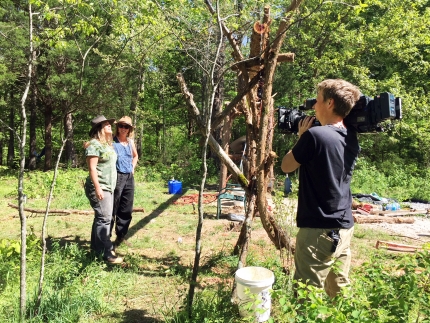 While being filmed for an upcoming episode of “Homestead Rescue” on the Discovery Channel, Misty Raney, left, and Wren Russenholt, discuss a cedar “aqueduct” system designed to provide Wren and partner Ini with a more accessible way to bring water to their gardens. Times photo/Jessi Dreckman.

An episode of the Discovery Chanel’s hit TV show “Homestead Rescue” that was filmed in Ozark County earlier this year will air at 8 p.m. central time tonight, Wednesday, Dec. 13. The episode features a Luna-area couple named Wren and Ini, who have elected to use the last name Russenholt in the episode to protect their identity.

The show pairs the Raney family, including patriarch Marty and his son Matt and daughter Misty, with the Russenholts to tackle some difficulties the couple had after moving to the Ozark County property in the fall of 2015. The main issues the “Homestead Rescue” team tackled included building an octagon-shaped, cedar-sided cabin after the yurt the couple lived in began having mold issues in the humid Ozark County summers. Another issue the “Homestead Rescue” team tackled was providing a more accessible water source for Wren and Ini and their extensive gardens. The couple had previously only used a hand-operated well pump and water barrels that collected rainwater runoff from roof.

The show is bound to be interesting, given that the film crew’s 10 days in Ozark County coincided with the historic flood that ravaged the area last April. The intense weather caused difficulty for both the film and building crews. However, at the end of the 10 days, Wren and Ini had the new octagon-shaped cedar-log cabin and the cedar aqueduct system to irrigate their plants. After the episode airs, the Times will have a more in-depth interview with Wren and Ini, who have not yet seen the show about their experience.

Viewers can tune into the Discovery Channel to catch the episode at 8 p.m. central time on channel 182 on DISH Network, channel 278 on DirecTV and on the Discovery GO app. Full episodes of the show are also available after they air at www.discovery.com/tv-shows/homestead-rescue/.