OCSD, other agencies work together in helicopter marijuana patrol 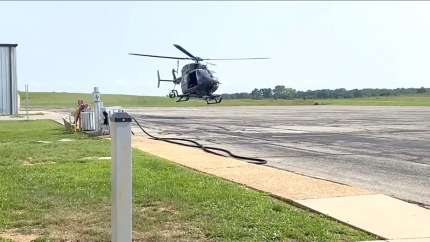 On July 21, the Ozark County Sheriff’s Department and other agencies worked together to conduct a marijuana interdiction patrol across Ozark County.

“Several marijuana locations were found. Some were licensed individuals who were in compliance with current Missouri law concerning medical marijuana,” OCSD posted on its Facebook page. “It was nice to visit with folks who were following the law.”

Other locations were not in compliance with state law concerning marijuana-growing operations. In those places, the marijuana was seized, and those investigations continue.

Ozark County Sheriff Cass Martin said the helicopter was loaned to the officers for their use by the state of Missouri. Several local residents called the sheriff’s office and other officials’ offices when they saw the helicopter flying at low levels over their properties.

“Contrary to assertions made to our office and to various elected officials, no federal troops were involved. No guns were seized. No men in black suits were present,” the OCSD post said. “Sheriff Cass Martin firmly believes in the 2nd Amendment and our Constitutional Rights. Those who do not will continue to have our attention.”