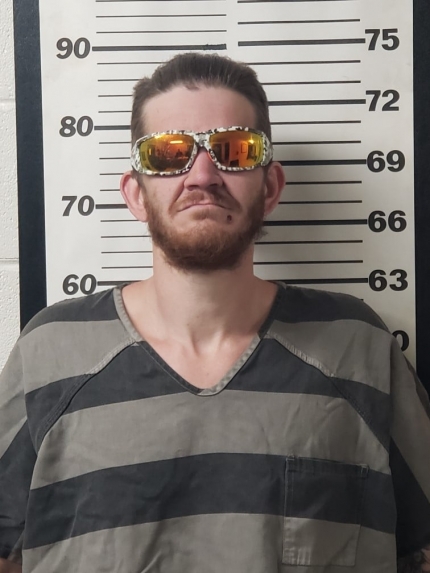 Owner found: The next day, the OCSD followed up with this mug shot post indicating that the sunglasses owner was found. Huelsenbeck was arrested in West Plains where he was hiding in a closet. 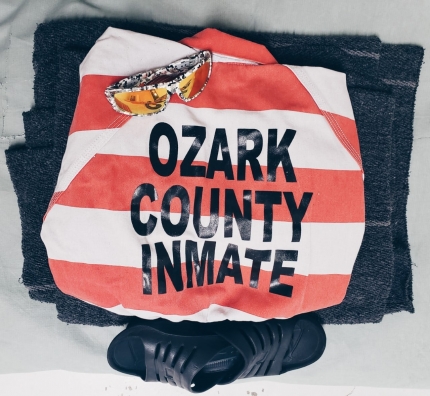 Found property: The Ozark County Sheriff’s Department posted this photo to Facebook of a jail outfit with a pair of sunglasses that Sheriff Martin picked up from William Huelsenbeck, who fled from the sheriff after he tried to stop him for an active felony warrant.

The Ozark County Sheriff’s Department used humor in a recent Facebook post about a subject who fled the scene of an attempted arrest. On April 26, the sheriff’s department posted a photo of an Ozark County Jail striped jumpsuit with a pair of sunglasses on top. The caption of the post was titled, “Found Property.”

In the post, the sheriff’s department detailed an April 26 incident in which Sheriff Cass Martin saw Gainesville resident William Huelsenbeck in a white Ford Ranger pickup at a home on Highway 160. Martin said he knew Huelsenbeck had an active felony warrant out of Ozark County Circuit Court for failure to appear in a case in which he’s charged with possession of methamphetamine.

The sheriff pulled into the driveway of the home to contact Huelsenbeck, the suspect reportedly got into the Ford Ranger, shut the door and drove south. The sheriff pursued him as Huelsenbeck turned west into an area of cleared trees.

“After traveling down the road about a quarter mile, Mr. Huelsenbeck high-centered the truck on some rocks, exited the vehicle and fled south through the woods on foot,” the OCSD post says.

The next day, the OCSD posted a mug shot of Huelsenbeck, donning the glasses, with a post that indicated, “Owner Found.”

The post explained that on April 27, the OCSD called the Howell County Sheriff’s Office to inform them that wanted suspect Huelsenbeck was possibly staying at a residence in their county.

HCSD Deputy Seth Smith reportedly found Huelsenbeck hiding in a closet at the home. He was taken into custody without incident.

“We would like to thank Howell County Deputy Smith and the Howell County Sheriff’s Office for their efforts in locating Mr. Huelsenbeck. We greatly appreciate your assistance,” the post said. “And last, but certainly not least, we would like to thank Mr. Huelsenbeck for being such a great sport this morning. He was more than happy to participate in a little photoshoot for this post.”

Huelsenbeck is being held in the Ozark County Jail on a $10,000 cash-only bond and has been charged with an additional felony of resisting or interfering with an arrest for a felony. A bond reduction hearing is scheduled in that case at 10 a.m. May 10 before Associate Circuit Judge Raymond Gross.

He is also scheduled to appear today, May 4 before Circuit Judge Craig Carter for probation violation hearing in a 2016 case in which he pleaded guilty to tampering with a motor vehicle and a plea hearing or trial setting in an open case in which he’s charged with possession of meth, possession of marijuana and unlawful use of drug paraphernalia.