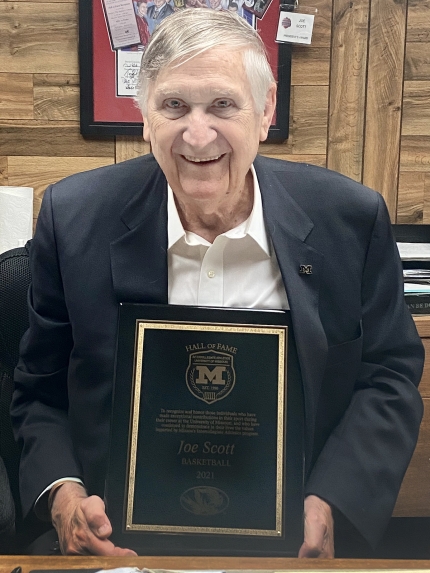 Gainesville native Louie Joe Scott, who now practices law in Poplar Bluff, was recently inducted into the Missouri Intercollegiate Hall of Fame during an Oct. 1 ceremony in Columbia.

Former Ozark County resident and Gainesville High School graduate Louie Joe Scott, who now lives in Poplar Bluff with his wife, Judy, was inducted into the Missouri Intercollegiate Hall of Fame during a ceremony Friday, Oct. 1, at the Tiger Hotel on the University of Missouri-Columbia campus. Longtime friends Jeff and Taler Nash of Gainesville attended the ceremony with Scott.

A plaque given to Scott and the other recipients of the honor reads, “To recognize and honor those individuals who have made exceptional contributions in their sport during their career at the University of Missouri, and who have continued to demonstrate in their lives the values imparted by Mizzou’s Intercollegiate Athletics program.”

Scott, who is known by many in Ozark County as the “Gainesville Gunner,” played basketball for MU from 1959 through 1961.

A start as a Gainesville Bulldog

Before the 3-point shot and the shot clock in college basketball, Joe Scott made his lasting mark on University of Missouri sports. On March 6, 1961, Scott scored a record-shattering 46 points against the Nebraska Cornhuskers in a game played in Brewer Field House on the Mizzou campus. After 60 years, Scott’s scoring performance still stands today as the single-game, individual scoring achievement in Missouri basketball’s history.

As a Gainesville High School Bulldog, Scott, the son of the late Melvin and Lois Scott, was no stranger to racking up points, averaging 30.8 points per game. The hard-driving shooting guard often fired shots from 25 feet and had a 58-point performance as a senior.

He led the Gainesville Bulldogs to the Missouri State Class M tournament in 1957, the first time the school had qualified for the state tournament. Gainesville took fourth place, and Scott was named to the First Team All-State and First Team All-Ozarks Region. He was a unanimous-choice All-State Tournament Team pick and scored in excess of 1,100 points during his senior year in high school. When he graduated from GHS in 1957, he held the highest scoring average in all classes of schools in the state.

Breaking records as an MU Tiger

Scott says that freshmen were not allowed to play varsity sports at that time as they are now, so his achievements were accumulated in just three years.

Even with subsequent changes in college basketball’s regulations, Scott’s accumulated 1,128 total points still rank in the top 25 overall, 6 points behind the total of his freshman coach, Norm Stewart. A three-year letterman at Mizzou, Scott averaged 18.4 points per game as a junior and 16.5 as a senior guard during a time when college basketball was dominated by “inside big-man scoring,” he said.

No guard in conference annuals ever threw a hotter scoring hand than Scott’s 46-point spree in the 1961 game against Nebraska. In fact, Scott’s fusillade marked just the third time in conference history that a backcourt player had scored in the 40s.

Scott’s performance also topped the Big Eight Conference, and for several years he held that single-game scoring record tied with Wilt Chamberlain. Scott hit 18 of his 30 field goals tries - 60 percent - and 10 of 13 free throws to tie Wilt Chamberlain’s one-game high against a conference team, Nebraska, in 1958.

He also set another Bengal record with his 18 goals, tying Clyde Lovelette’s feat in the 1952 Colorado game.

Although Scott is remembered for his single-game 46 points, he says beating Kansas in his final game as an MU Tiger is chief among his favorite memories. Following a bench-clearing, bleacher-clearing brawl, the Tigers fought to a 79-76 nationally televised victory over Kansas, which had manhandled Missouri for five straight games during Scott’s tenure. The team gloried in the Mizzou tradition: they went out swinging, he said.

College, the majors, law school and a career as an attorney

After Mizzou, Scott played professional basketball in the now-defunct American Basketball League. He was drafted by the Chicago Majors, a team owned by Abe Saperstein, who also owned the Harlem Globetrotters. After a season, the 6’4” guard quit the majors and applied to and was accepted at the University of Missouri Law School in 1963. At the time, he was the only physical education undergraduate to ever have been admitted to the law school.

He graduated in 1966, moved to Poplar Bluff and took an associate position in the law firm of future U.S. District Judge H. Kenneth Wangelin. Scott is currently a senior partner in the Scott Law Group, LLC, and practices law with his son, John, daughter-in-law Kendra and associates.

Scott and Judy, his wife of 59 years, now live in Poplar Bluff but also maintain a residence in Ozark County.

The law practice has not kept Scott from giving generously of his time and money to sports projects in the southeast and southwest Missouri. Scott coached basketball for many years, served on the board of the Poplar Bluff Parks and Recreation Department for more than 20 years, raised money for a variety of sports booster clubs and used his considerable influence to promote sports.

For 50  years he has provided pro-bono legal services to sports organizations, served as master of ceremonies for sports banquets and also as the featured speaker at basketball banquets, high school commencements and civil and historical groups. For his service and support, Scott has been honored with a variety of legislative resolutions marking his athletic, civil and political contributions.

“Joe Scott has never forgotten his humble beginnings in rural Ozark County, or the folks who encouraged him and have followed his career,” a press release announcing the award said.

Despite the many achievements and accomplishments Scott has made in his life, he says he is still proud to be known as “Louie Joe, the Gainesville Gunner.”