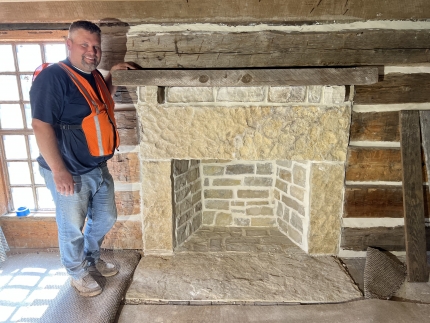 Times photo/Bruce Roberts Wes Uchtman, an Ozark County stonemason who owns and operates Uchtman Hand-Crafted Stone in Mountain Home, Arkansas, is shown next to the limestone fireplace inside the historic 1832 John Wolf cabin that sits in the shadows of the 1829 Jacob Wolf House in Norfork, Arkansas. 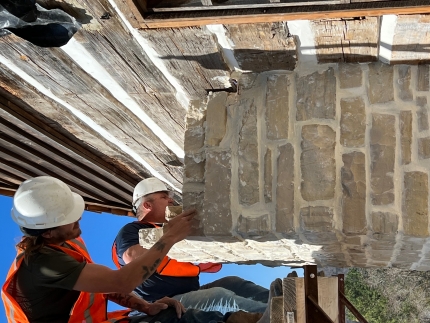 Times photo/Bruce Roberts Wes Uchtman and his crew work on the chimney of the John Wolf Cabin during a recent gorgeous spring day. 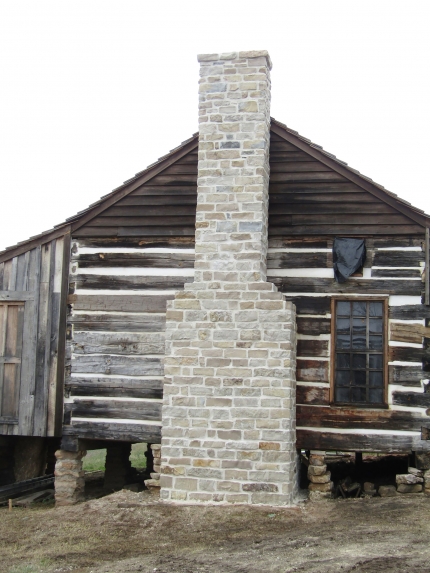 Photo courtesy of the Wolf House project This photo shows the completed project.

Arkansas’ newest historic site is getting a facelift, and an Ozark County master stonemason is rocking his part of it.

Gainesville’s Wes Uchtman, who owns Uchtman Hand-Crafted Stone in Mountain Home, Arkansas, was chosen to build a period-correct limestone fireplace for the 1832 John Wolf cabin. The cabin sits on the site of the 1829 Jacob Wolf House in Norfork, Arkansas, the oldest territorial courthouse west of the Mississippi River, and Arkansas’ newest historic site under the auspices of the Arkansas Department of Parks Heritage and Tourism.

The project is a restoration construction project that currently is in phase two, with the first phase completed two years ago. This second phase involves putting a new shake roof on the Jacob Wolf House, new shutters and carpentry repairs on the Jacob Wolf House and a complete restoration of the John Wolf cabin, which was moved to the Wolf House site from Calico Rock in the early 1990s. John Wolf was Jacob’s brother.

Jacob Wolf was a merchant, builder of log structures, carpenter and blacksmith. According to the Arkansas Historic Preservation Program, he was elected to the General Assembly of Arkansas Territory in 1826. The two-story dogtrot Wolf House was built by Jacob Wolf in 1829 as the first permanent courthouse for Izard County in Arkansas Territory. It was listed on the National Register of Historic Places in 1973 and is the last remaining two-story dogtrot public structure in the United States.

One of the great features of the Wolf House is the native limestone fireplace, so when the funding became available to restore the John Wolf cabin, a master stonemason was needed to replicate the limestone fireplace and chimney in the smaller cabin.

Wes is no newbie to stonework.

“I’ve been doing this basically my whole life, following in the footsteps of my dad,” Uchtman said. He said he made it his full-time career in 1998, and his business is flourishing. “We are just covered up with work,” Uchtman said. “But this project is special because of its historic significance.”

“We are very fortunate to have Wes on this project,” said Marlon Mowdy, site manager of the Jacob Wolf Site. “He is a top-notch stonemason … one of the best I’ve ever seen.”

Mowdy said the current construction project should be completed by early June. In the meantime, tours of the Wolf House have been suspended while the construction work is being done. The site is still open to the public during the construction Tuesdays through Saturdays 8 a.m. to 4:30 p.m.

A “phase three” of the project may start in the summer of 2023 and would include a new picnic pavilion on the south end of the property, exhibits, eight new interpretive panels on the site’s ADA trail, restoration of the 19th century cistern on the property and continuation of the split rail fence around the two-acre site, Mowdy said. He said he applied for an Arkansas Natural Culture Resource Council Grant in January that would fund the third phase of the restoration project.

“We have a lot planned to really provide visitors the opportunities to learn about the culture, history and environment that existed here 200 years ago,” Mowdy said.

Mowdy is also working to have the Wolf House site designated as an interpretive site for the Trail of Tears Benge Route. The Trail of Tears was a series of forced displacements of approximately 60,000 American Indians between 1830 and 1850 by the United States government. Arkansas Highway 5, which runs through Norfork and beside the Wolf House site, was part of the Benge route in the late 1830s of the Trail of Tears, where 1,200 Cherokee Indians were forced west into Indian Territory. Many of them died during the forced marches.

Mowdy said there is oral history documentation that Jacob Wolf repaired some of the carriages and wagons that were used by the Cherokees on that route. If the site is certified as a Trail of Tears interpretive site by the National Parks Service, that would add more exposure for the historic property, he said.

“This is certainly a site worth restoring, protecting and promoting,” Mowdy said.