The James Bridge on PP Highway scheduled to reopen today 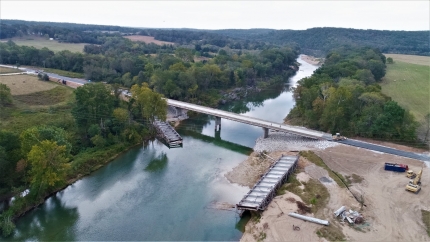 This photo of the rebuilt James Bridge was taken by Aerial Ozarks Oct. 1. Search for "Aerial Ozarks" on Facebook to view more drone footage of the CC Highway and PP Highway bridges throughout the process of being rebuilt.

The newly rebuilt James Bridge over the North Fork of the White River on PP Highway near Dawt is expected to reopen today, Oct. 11, after being washed away in the historic, late-April floods that wreaked havoc throughout Ozark County.

A second destroyed-and-rebuilt bridge – on CC Highway over the North Fork at what is known locally as Hammond Camp – reopened Oct. 4. The reopening of James Bridge was delayed so that the huge sections of the old bridge that had landed on the nearby river bank could be removed,  Robert Fry, Clarkson’s general manager of operations., said Monday. Guardrails on the new bridge couldn’t be installed until after those giant pieces of debris had been dragged out and hauled away. That work was expected to be finished Wednesday, and Fry said he expected the bridge to open to traffic “sometime Wednesday.”

Work on both bridges began the first week in July after contracts were signed June 29 between the Missouri Department of Transportation and Kansas City-based Clarkson Con-struction. The James Bridge contract was for $2,636,575, about $161,000 less than the longer Cudworth Bridge on CC Highway.

Ironically, it was just about a year ago – in the Oct. 19, 2016, edition of the Times – when a story said MoDOT was planning to replace James Bridge and it was being offered, free of charge, to someone who might relocate it. Interested parties were invited to submit a proposal to MoDOT’s Historic Preservation Section by March 30, 2017, to move the bridge, built in 1958 and described as a “five-span bridge with two polygonal, Warren all-vertical pony truss spans and three steel girder approach spans – for a total length of 405 feet.”

Apparently, no one bid on the project. And none of those structural details mattered to the raging floodwaters that knocked the “historic” bridge off its pilings April 29 and swept its broken sections downstream.

For years, the area beneath the bridge had been a popular, unofficial take-out point for many who floated the river in their own canoes, kayaks and tubes. But when plans for the new bridge were released, it was announced that the area under the bridge would no longer be suitable or available for parking or for use as a river take-out point.

Private outfitters, including River of Life Farms, Pettit Canoe, Sunburst Ranch and Dawt Mill, either have their own put-in and take-out accesses on the North Fork or they operate on agreements with those who do. Floaters using their own vessels are left with few options, unless they pay one of the outfitters for river access and shuttle and take-out service. Currently, Ozark County’s only public river access points on the North Fork are at Hammond Camp (officially known as the North Fork Recreation Area in Mark Twain National Forest), Blair Bridge, Patrick Bridge and Tecumseh.