Hootin an Hollarin committee announces changes for this year’s festival 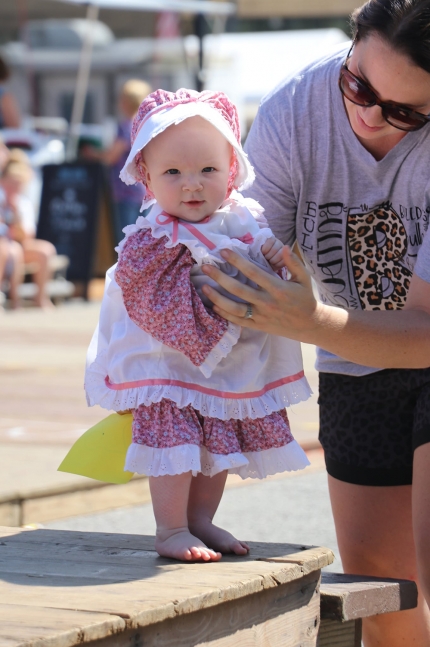 Brynlee Johnson, shown with mother Brianna Johnson, shows off her pioneer dress and pretty smile during the 2021 Hootin an Hollarin festival.

The Hootin an Hollarin Committee has been meeting monthly since April, and organizers say there are some exciting changes coming to this year’s festival, to be held Sept. 15-17, on the Gainesville square.

Hootin an Hollarin Chairperson Paula Rose, who has taken the reigns this year from long-time committeewoman Nancy Walker, talked with the Times after their last meeting and provided these updates:

One of the prominent changes this year will include changes to the annual Hootin an Hollarin costume parade and contest. The contest, which features festival-goers of all ages dressing in old-time and themed costumes, has traditionally been held at 2 p.m. Friday. This year, the contest will instead be held at 11 a.m. on Saturday.

The format of the costume contest will slightly change too, in hopes to provide a cooler experience. In past years, costume parade participants have signed up and lined up on the northwest corner of the square near City Hall. The Gainesville High School band usually leads the way with a performance, followed by the line of costume contest participants. The group winds its way around the square to the main stage, located on the east side of the square.

“This year we’ll have them sign up  behind the stage in the shade. Then we’ll have them walk around and get on the platform in front of the stage like they usually do,” Rose said. “...but we decided not to have the march around the square at all this year. It was really hard to do. It’s hot and some people have pull things like wagons or carry props and if they have animals involved, they may not want to cooperate for that long of a walk.”

Rose said that the pet show will be held prior to the costume parade at 10 a.m. as usual.

Rose said the Hootin an Hollarin committee has been working hard to try and bring more demonstrations of old-time crafts and skills.

Among the demonstrators scheduled to appear are a pottery maker, broom maker, flint knapper and rope maker. Committee members are discussing the possibility of having other skills shown, such as horseshoeing or sheep sheering.

“Cowboy Rick” Hamby and wife “Arkansas Bev” are bringing their authentic 1880s restored stagecoach to sit on the Gainesville square throughout the whole festival, Rose said. The coach was recently used in a trek across many historic roadways in Ozark County.

The Hambys will be hosting a live radio broadcast of “Great Moments in American History” at noon on Friday, Sept. 17, with a special American history question and answer contest with prizes. The radio show iwll be broadcast on West Plains radio station KKDY 102.5 FM.

Rose said that many favorite Hootin an Hollarin bands are returning this year, setting the tone of the festival with bluegrass, country and other tunes.

Rose said at 4:30 p.m. Saturday, a group of cloggers will take the stage to provide musical and dancing entertainment.

Another new band, Eastern Heights, will take the stage at 7:30 p.m. Saturday. The modern country duo, lead singer Rob Blackburn and guitarist and musical director Grant Moody, has high energy and tight harmonies. Although they are primarily a modern country band, the artists play multiple genres. Guests can expect Eastern Hights to play songs by artists including Rascal Flatts, Brad Paisley, Dan and Shay, Keith Urban and others.

Horseshoes will transition to cornhole tournament

The Hootin an Hollarin horseshoe contest will transition this year to a cornhole tournament.

The horseshoe contest was brought back a few years ago, but attendance has been lacking. The committee believes there may be more interest in a cornhole, a game similar to horseshoes except contenders use wooden boxes called cornhole platforms and corn- or bean-bags instead of horseshoes and metal stakes.

“I was worried that it was a new thing, but we looked it up and it was actually invented and played in the 1880s. So, it kind of fits with the theme,” Rose said.

For more information on the festival visit hootinanhollarin.com or search for “Hootin an Hollarin” on Facebook.