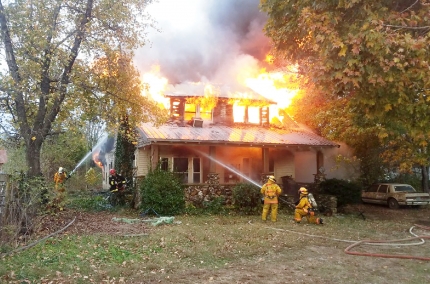 Firefighters from Dora, Tecumseh and Eastern Douglas VFDs responded to the fire on Dora’s main street Friday evening, but they were only able to keep the fire from spreading to other structures. Within an hour, the house, built in 1924 with hand-planed lumber from the Deupree family’s planer mill, was on the ground. 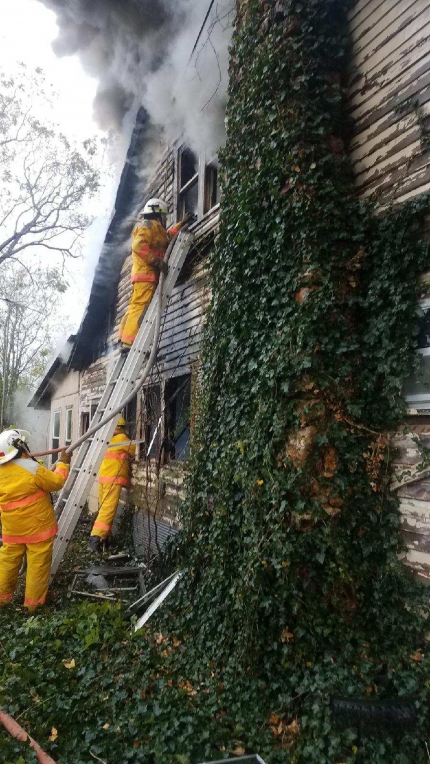 Dora VFD chief Shipley, at the top of the ladder, and assistant chief John Epley, on the ground, used a 1 1/2-inch-diameter hose to put water through an upstairs window of the burning Deupree home while Tecumseh VFD chief Jonathan Winrod operated another hose through a downstairs window. Shipley said firefighters poured 12,000 gallons of water on the burning structure

A two-story house that had stood in Dora for 93 years was destroyed in less than an hour Friday night as a raging fire quickly reduced to ashes the home where Dick Deupree, 92, had grown up and lived as an adult for many years. Deupree and his dog, Wimpy, were rescued from the fire by his neighbor and close friend, Humberto Pardo.

Pardo, who lives next door to Deupree with his longtime companion Lori Prater, Deupree’s niece, told the Times that when he stepped outside about 4:30 p.m. Friday to feed some horses he noticed a lot of smoke. When he realized it was coming from the Deupree home, “I knew it was going to be on fire all the way to the ground. I thought, ‘I have to get him out of there.’ He’s like my grandpa. I check every morning to see how he’s doing,” he said.

Pardo rushed to the backdoor of the home, yanked it open and yelled to Deupree, who spends most of his time on the enclosed back porch, “We need to get out! Now!”

He managed to get Deupree and his dog outside and then rushed back in to look for the key to Deupree’s four-wheeler, hoping Deupree could back it out and save it from the fire. “I went back in to get the key – and then I see he was back inside with me. Oh, my Lord! I grabbed the key and got him out for the second time,” said Pardo, a Cuban immigrant who came to the States in 1980.

Pardo then went back in a third time, hoping to find Deupree’s wallet, and again, he was shocked to see that Deupree was trying to follow him back into his burning home. “He can’t hear or see good, and he’s old. I had to yell. He can’t walk like a normal person because he has a problem with his knees. He was trying to come back in again. It was crazy. I think he wanted to go be with his wife in heaven, but I said, ‘Not on my watch!’”

Pardo called 911, “but she [the dispatcher] said she had to talk to Douglas County for some reason. It was crazy. Dick and the dog and me – it was so awful. He was so nervous. He was cold. And about that time, I see the flames shooting from the side of the house. I knew it was going to be bad. I never in my life been through something like that. Thanks, God, for the Lord putting me there when he did, ” he said.

“Fire was coming out of the eaves in the upstairs of the house when we arrived. It was pretty much all over the house by the time we got there, and there wasn’t much we could do but keep it contained,” Shipley said. “We put 12,000 gallons of water on it, and the fire got away from us anyway. It was an old house with lots of nooks and crannies and lots of stuff that had collected over the years, so it was a tinderbox. We’d get it knocked down, and the fire would come ripping back.”

Within an hour, the house was “on the ground.” The cause of the fire is unknown.

Her uncle lost everything, Lori Prater told the Times. A grandchild, Kila Butts, has started an online fundraiser account at gofundme.com. To help, search for “Deupree” and then find “house fire recovery.”

The Deupree family’s history in Dora dates from 1912, when his grandparents, Edwin and Mattie Deupree, bought 2,700 acres there, according to a story about the Deuprees by Gina Hollingshad in the December 2016 edition of the Old Mill Run. The purchase included a store, which Dick’s parents, Ray and Alta Deupree, operated for decades (see this week’s Times Past photo, page 6). Edwin Deupree served as postmaster in the post office adjoining the store.

In 1924, Ray Deupree built the family’s home across the street from the store. The Deuprees also owned a steam-powered planer mill in Dora, and its hand-planed lumber was used to construct the house. Dick told  Hollingshad that a carpenter named McMurtrey built the house, and John Moffis did the finish work, building the doors, windows and corner-pegged cabinets. Enoch Fox built the fireplace. After Friday’s devastating blaze, the fireplace and its stone chimney were the only things left standing.

Dick grew up in the house in Dora; his mother served on the Dora school board for 27 years. The Deuprees donated the land for the school that opened in 1939, when Dick was a freshman.

Hollingshad ended her Old Mill Run story by writing, “Families like the Deuprees helped make the town of Dora what it is today, giving back to the community that they loved, whether it was donating land or helping their neighbors in need whenever they could.”