Gainesville WWI veteran’s family thought he was killed in France 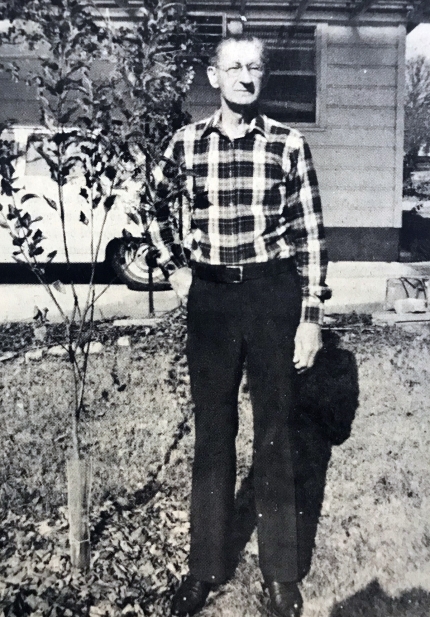 Wess Farless stands by the 5-in-1 dwarf apple tree he planted in the yard of his home at Harlin Drive and Fourth Street in Gainesville.

Editor’s note: The Ozark County Times continues its salute to veterans, recognizing America’s entry into World War I 100 years ago this year, by reprinting this story Sue Ann Jones wrote about Ozark County native John Wesley Farless, a World War I veteran, for its Dec. 2, 1982, edition. Farless died in 1989 and is buried in Lilly Ridge Cemetery.

John Wesley Farless, known as Wess to his many Ozark County friends, has had his share of adventures during his 87 years. He’s worked in the oil fields of Oklahoma, the wheat fields of Kansas, at a lead smelter, a packing house, in construction in Texas and in a landscaping business in Idaho.

But none of his jobs, none of his adventures, has been as memorable – or as traumatic – as his experiences in France in 1918.

That adventure almost killed him. His family here thought it did.

“My brother, Sam, and I were called up in the first 5 percent in the first call of the draft in 1917, for World War I,” Farless recalled recently in his neat, comfortable home overlooking the Gainesville square.

“We took the exam and we were both three pounds too light for our weight. They exempted us for 90 days. After that, they called us up, and they never weighed us again,” said Farless, who is 5’8” tall and still very thin.

The brothers were two of the seven children of John and Mary Elizabeth Miller Farless, who in the 1870s homesteaded a farm south of Gainesville near where the Timber Knob fire tower is now. They had moved to the area with their families from Tennessee when they both were children.

After they were drafted, Sam and Wess Farless were in training from February to June 1918 in San Antonio, Texas, then rode a troop train to New York. They crossed the Atlantic Ocean in a converted freighter, bound for war.

On the front lines in France

Within a month, the Farless brothers were near the front lines in France

“They (the Germans) had these flares and when they set one off, they could see you from their airplanes. It would light up the sky like daylight. When that happened, you made no move. You just froze, whatever you were doing. We went in at night. They found out where we were and went to shelling us.”

Farless had been in the trenches just 18 hours when he was hit.

“We were in the trench, resting. A shell came in right over me. I was in part of the trench that was camouflaged with logs and tents and stuff. That shell exploded when it hit the logs. Thirteen slugs of shrapnel hit me in the hips, the arms, the legs and my stomach. I felt it, like someone had thrown fire in my face. When I came to, I was crawling down the trench, trying to get out. I crawled about 50 feet, but it was the wrong way to the wrong end,” he said.

His brother, Sam, didn’t see him get hit.

“But he came after they took me away and picked up my things,” he said. “I didn’t know until October or November whether he was alive or dead.”

His brother survived the war without injury and later served in the occupation forces in Germany.

In the Army hospital in France, Farless’ condition was complicated by pneumonia.

“I was unconscious for nine days. When one of us (patients) got too bad or died, they put a sheet over the posts of the bed to cover us up. They did that to me three times. Once, a reporter for the Kansas City newspaper was there and aw the sheet over my bed. He reported me as dead. People down here (in Gainesville) got the Kansas City paper for the casualty reports. First the paper said I was seriously wounded. Ten or 12 days later, I was listed as dead. My folks didn’t know any different until sometime later when I had the nurse write home. One of my nurses was raised in Mountain Grove. It might have been she who wrote. But my folks didn’t know I was alive until they got the letter.”

Farless was discharged Feb. 15, 1919 and still proudly displays the artistic commendation signed by President Woodrow Wilson noting that he “Served with Honor in the World War and Was Wounded in Action.”

Another memento of his Army days is a photograph he had taken when he was first drafted. He was wearing summer issue at the time, so he used a jacket supplied by the photographer. On his return to the States from France, he secured a much more elegant uniform.

Explaining how this came about, he said, “I got a 24-hour pass and went into New York to do some sightseeing. My clothes weren’t fit to wear because they had run them through the delouser. So I went into an Army clothing store and bought an officer’s serge uniform and exchanged the insignia with my own (private’s insignia). I paid $25 for it. That was a big price then.”

“Our first date, Mearle Harlin ran a taxi and Homer Hill and I and our girlfriends hired him to take us to a picnic at Mammoth. The next day, they were having a baptism near what’s now the Bobby Walker place. We went down there too. She rode home with her folks in their wagon.”

Mrs. Farless died last January. The couple has three children: Alfred Woodrow of  Oklahoma, Wilma Plaster of Branson and Wanda Tevebaugh of Carthage. There are 11 grandchildren and 11 great-grandchildren.

Most of their married life, the Farlesses lived in Gainesville, where he worked as a grocery clerk for several merchants, including Virgil Graves, Frank Johnson and Cecil Bushong.

“I ran a grocery store for Prentice Bushong, too. Prentice sold it and he put in the first soda fountain in Gainesville. I ran that for about three years. We made our own carbonated water.”

While business hours were usually spent at a job on the square, Farless’ leisure time was spent caring for his garden and yard.

‘Second best apples in the world’

“I always like flowers and fruit trees and shrubbery. We lived in a house over across from the (elementary) school, with Highway 5 in front of us. Folks would drive by and see me taking care of stuff, and they thought I knew something about it. They would ask me about it. I guess I just came by it naturally. My father used to have an orchard on the old homestead.”

In fact, he said, apples from the Farless orchard were entered in competition during the 1904 World’s Fair in St. Louis by an early Gainesville druggist, Harry Force.

“The druggist told my folks he thought we had fine fruit, and he wanted us to fix up a nice basket for him to take up there to the Fair. Between six months and a year later, they mailed us the silver medal for apples – the second best apples in the world.”

Farless said he doesn’t know what happened to the medal.

He and his wife raised fruit, grapes, shrubs, vegetables and roses around their house. Five years ago, they moved to the home Farless now occupies at Fourth Street and Harlin Drive. Recently he set out a climbing peace rose, an orchid masterpiece rose and Paul’s scarlet rose, as well as irises, tulips and a 5-in-1 apple tree.

He retired 11 years ago, following heart bypass surgery in the Veteran Administration hospital in Kansas City.

“Doctors said I was only the 12th patient at that hospital with that kind of surgery. I guess they’ve done hundreds of them now,” he said.

He has been an elder in the Gainesville Church of Christ since 1941. Now, church activities, gardening (either working outside in summer or poring over seed catalogs in winter) and traveling take up much of his time. Last spring he and his daughter, Wilma, flew to California to visit one of his brothers, Bob, 84, in Wasco. Then they rode the train to Washington to visit another brother, Arnold, 78, in Kelso, and a sister, Melissa, 80, in Longview.

His daughter carefully chronicled the trip in a scrapbook full of photographs and souvenirs of the journey that Farless proudly shares with visitors. It was quite an adventure – the jet flights, the Amtrak rides and the sightseeing visits to the huge fields of roses. But it was simply one of many adventures in Farless’ long and color life.