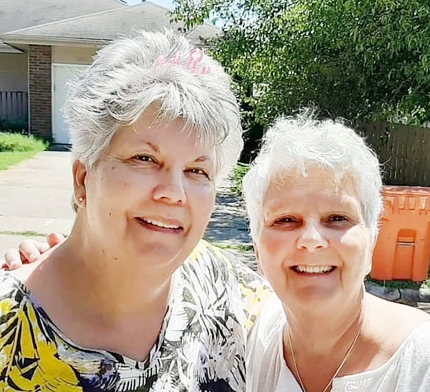 Gainesville-area resident Bonnie Luna has never starred in a TV crime-story series, but she’s still pondering how closely reality mimicked fiction when she was in a Branson store May 6 that was hit by a would-be robber. And while the attempted robbery was thwarted by bystanders, the story ended in tragedy.

Bonnie and her companion, Jerry Arnold, were in Branson that day with Bonnie’s sister and brother-in-law, Judy and Paul Willingham of Springfield, to attend an area-appreciation show at one of the music venues. While there, they stopped by the Coach store in the Tanger Outlet Mall to exchange a purse Bonnie’s niece had given her as a gift.

Jerry waited in the car while Judy and Paul went into the Coach store. “It was about two in the afternoon. I was in the middle of the store, looking around, and I heard a woman scream,” Bonnie said. “There was a guy wearing a hoodie, and he was snapping up all the purses in the front of the store. I thought, ‘Oh my god!’ I was looking around for someplace to crawl under, either under a cupboard or a back door or something. It was like something you see on TV. I knew I needed to hide or run.”

The woman who screamed was a store employee, Bonnie said. She and most of the other people in the store, including Judy and Paul, “were all kind of looking on, watching at the front of the store,” she said. Meanwhile, Bonnie was “debating whether I could hide under a cabinet. Everyone else was up front, watching. I was the only one wanting to get away. I was thinking, ‘I just fought cancer two times. I ain’t dying now.’”

Then one of the customers “a guy who was there with his wife – he might have been a bouncer or something – he jumped him,” she said. “There were some cement workers outside, working on the cement, and four of them came in. They had him down and got all the purses away from him.”

The would-be thief was still being held on the ground when Branson Police officers arrived a few minutes later. “The man was saying, ‘I can’t breathe. I can’t breathe.’ And the guys let him up when they saw the cops,” Bonnie said. “He jumped up and ran off. The cement workers ran after him, but he jumped in his car and went flying out of there. He sideswiped another car and took out a sign.”

Bonnie said one of the police officers stayed in the store, which resumed business as usual. “Some of them were joking and asking, ‘Do we get a discount?’” Bonnie said.

City of Branson communications manager Melody Pettit confirmed that Branson police were unable to apprehend the suspect. However, she said that Taney County Sheriff’s deputies were alerted to the fleeing suspect.

A May 10 post by reporter Elizabeth VanMetre on KY3.com reported that two Taney County deputies spotted the suspect’s vehicle traveling “erratically” on Highway 13 near Reeds Spring. A pursuit began, with speeds reaching close to 100 mph, VanMetre reported, citing Taney County Sheriff Brad Daniels, who also said witnesses reported “that Wright crossed over into the southbound lane during the pursuit, heading the wrong direction.”

Shortly after the Taney County officers were told to end their pursuit, the suspect, identified later as Marty Wright, 32, of Kansas City, crashed into a car in which Nancy Branham, 79, of Reeds Spring, was a passenger. The crash occurred at Highways 13 and 248, VanMetre said.

On Monday, Sheriff Daniels confirmed to the Times that Wright died at the scene, and Branham died at a local hospital from injuries sustained in the crash. The driver of Branham’s car suffered critical injuries, according to the KY3 report.

While Bonnie is relieved to have survived the incident herself, she doesn’t like the way the story ended. “I’m sorry it turned out that way,” she said.