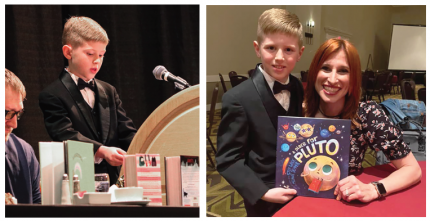 Photos submitted Gainesville Elementary student Owen Hogan attended this year’s Missouri Association of School Librarians Annual Spring Conference as a presenter of the 2021 Show Me Readers Awards, which are awarded based on votes from students. One of the authors he presented an award to was Stef Wade, pictured with Owen in the photo above, the author of one of his favorite books, A Place for Pluto.

During the Readers Award Banquet portion of the event, 9-year-old Owen took to the podium, representing the more than 61,000 first through third grade Missouri students who participated in the 2021 Show Me Readers Awards voting, a contest with awards given to children’s books based on votes cast by the student readers.

During Owen’s presentation, he recognized the top three books chosen during that vote, along with the authors and illustrators of those books. Among the authors Owen recognized was Stef Wade,  who attended the event to accept an award for her book, A Place for Pluto, which received third place in the 2021 Show Me Readers Award vote - and is one of Owen’s favorites.

“A Place for Pluto has been a favorite of Owen’s since it was published. Mrs. Wade also let Owen read her newest book, Moving To Mars, which has not been released yet,” said Owen’s mom Sarah, describing the exciting night. “He was able to assist her during the book signing and autograph hour prior to the ceremony, introduce her and her book at the ceremony and spend dinner visiting about all things space and astronaut related, which they both share a love for.”

Wade was impressed with Owen, posting photos with the young reader to her social media accounts after the event.

“This young man spoke in front of more than 500-plus and blew us all away. A big thinker and voracious reader, he reminded me why I love this job so much,” Wade’s Facebook post said.

The Show Me Readers Award is sponsored by the Missouri Association of School Librarians and is selected annually by Missouri Students in first through third grades.  The purpose of the Show Me Readers Award is to promote literature, literacy and reading in Missouri elementary schools for grades one through three and to promote recognition of authors and illustrators of books that are favorites of Missouri children in these grades.