Friends, family hope to help injured Caulfield man with expenses as he recovers 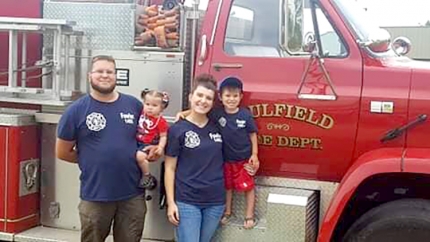 Jeremy Fowler, 28, shown here with his wife, Bakersfield High School teacher Tori Fowler, and their two children, Sadie, 3, and Josiah, 6, sustained severe injuries Saturday when a 1,400-pound zero-turn mower flipped onto him as he was loading it after mowing a Viola, Arkansas, cemetery. Jeremy is an EMT with Fulton County (Arkansas) Hospital Ambulance service, a volunteer firefighter / first responder with the Caulfield Volunteer Fire Department, and assistant youth pastor at Pomona Assembly of God. His friends and relatives have started a gofundme.com fundraiser campaign to help the family with expenses while he is recovering.

Friends and relatives are asking for prayers – and financial help – for Jeremy Fowler and his family after the 28-year-old Caulfield resident suffered a severe injury Saturday as he was finishing a mowing job at a Viola, Arkansas, cemetery.

Jeremy’s mother, Bakersfield resident Kelly Fowler, told the Times Monday that Jeremy had finished mowing and was loading a zero-turn mower onto a trailer when it flipped over and landed on top of him. He was by himself, she said, and was crushed beneath the mower with his spine bent at a 90-degree angle.

Somehow, Jeremy managed to lift the 1,400-pound mower enough so he could get out from it and grapple to the cab of his truck to get his cell phone.

“By the grace of God, he was able to call out,” Kelly Fowler said, adding that three family members rushed to the scene in response to Jeremy’s call, but when they got there, none of their phones, including Jeremy’s, had any service. One of the relatives hurriedly loaded Jeremy into their vehicle and drove him to Fulton County Hospital in Salem, Arkansas, about 20 miles away.

From there he was taken to Cox South Hospital in Springfield by Fulton County Hospital Ambulance, the service Jeremy works for as an emergency medical technician.

He is also a volunteer firefighter / first responder with Caulfield Volunteer Fire Department and assistant youth pastor at the Pomona Assembly of God.

After surgery, doctors told the family the damage to Jeremy’s spin was “much worse than they thought,” according to a family member’s Facebook post. Shattered bone fragments were pressing against his spinal cord, and his spinal column was snapped at the T12 vertebra in the middle of his back “and was still at a 90-degree angle,” the post said.

The surgeon straightened Jeremy’s spine with rods and screws and told the family he was amazed the spinal cord itself was not damaged. “He said Jeremy has really big muscles in his back. Thank God for that or he wouldn’t have been able to have gotten out from under that 1,400-pound mower to call for help,” the post said, adding, “please keep praying.”

Considering the severe injuries Jeremy sustained,  Kelly Fowler sees miracles. “It’s a miracle that he could get the mower off of him with his spine bent at a 90-degree angle,” she  said. “Even the surgeons were amazed that he could get to the truck and get his phone. And again, it’s the grace of God that he’s not paralyzed.”

Jeremy is expected to recover, but it will probably be a slow and painful journey. For now, due to covid restrictions, only his wife, Tori, can be with him in the hospital. After he’s released from Cox South and returns to the home he shares with Tori, a Bakersfield High School math teacher, and their two children, Josiah, 6, and Sadie, 3, he will need several weeks of physical therapy, his mother said. That means he’ll probably be out of work for quite a while.

The Fowlers have insurance, “but they don’t know how good it is,” and they expect massive medical bills, Kelly said. Friends and relatives have set up a GoFundMe.com account (search for Jeremy Fowler) to help “cover loss of income so he can continue paying bills and feed his family for the many months to come,” the GoFundMe account post says. Those wishing to help the family may also make checks payable to Jeremy or Tori Fowler and send them to Jeremy’s parents, Kelly and Randy Fowler, 14880 County Road 7990, Bakersfield, MO 65609.