Four years after the flood: Fleeing high water, couple spent 18 hours in their vehicles, trying to get to a place a few miles away 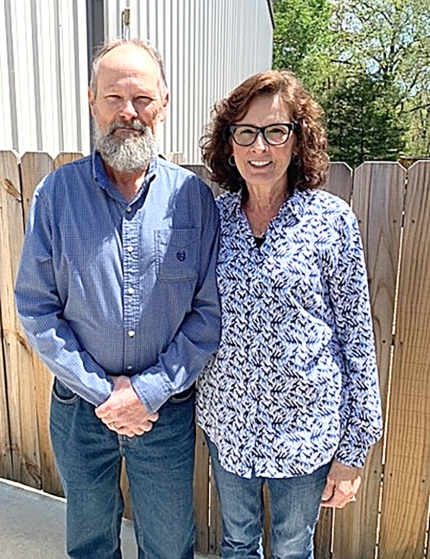 After their riverside cabin was wrecked by the historic 2017 flood, retired Gainesville teacher Robin Mustion and her husband, Rich, moved to a hilltop home on Highway 181. 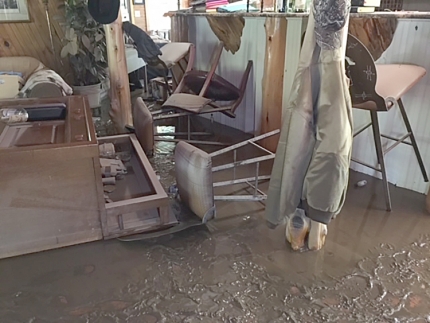 The water reached a depth of 54 inches inside the Mustions’ cabin and left “nasty, sticky mud” on every surface, Robin said. 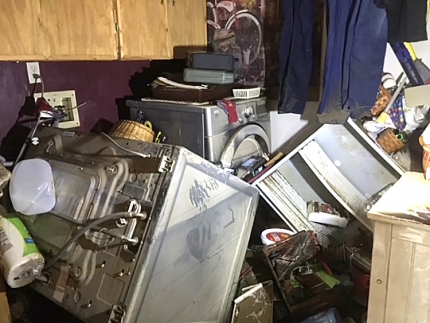 The 2017 floodwater’s current was so strong as it swirled through the Mustions’ home, it turned over and mangled the washer and dryer in their laundry room. 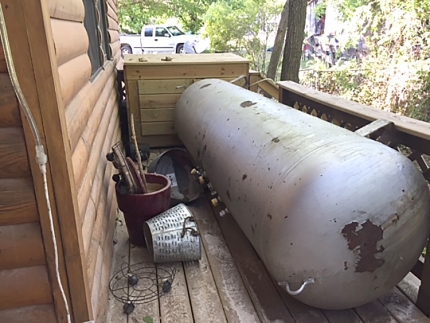 The power of the 2017 floodwaters that wrecked Robin and Rich Mustion’s cabin alongside Bryant Creek was demonstrated when the rushing water lifted their full propane tank up and over the railing and deposited it on the floor of their back deck. 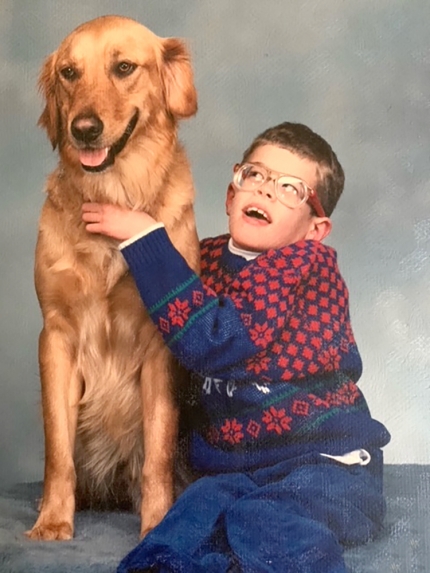 The Mustions’ son, Ted, and his service dog Bear are shown in this school photo from his elementary years. Ted, who was born with neurological issues, died of a stroke at age 15 in 1997. The historic 2017 flood turned Robin and Rich Mustion’s lives upside-down, but Ted’s death had given them a different perspective on life’s trials. “When you’ve lost a child, a flood isn’t that big of a deal,” Robin said.

Editor’s note: This is the second part of a two-part story marking the four-year anniversary of an historic flood that devastated parts of Ozark County on the weekend of April 29-30, 2017. In this story, retired Gainesville teacher Robin Mustion and her husband, Rich, share the story of how the flood changed their lives.

On Saturday, April 29, 2017, as the water in Bryant Creek crept ever closer to their cabin, which stood 350 yards from the stream’s banks, Rich and Robin Mustion rushed to load what belongings they could fit into Rich’s truck. Robin and the Mustions’ three Great Danes, Maxine, Maybelle and Crosby, crowded into her Tahoe. They waited several hours in their vehicles at the top of the hill behind their cabin, thinking the rain would abate. But it didn’t.

They agreed that they would head to Hammond Mill Camp, a place on CC Highway southeast of Dora that was usually a 15- to 20-minute drive from their cabin. Robin’s family had gathered at Hammond Mill Camp for annual reunions for 70 years, and Robin now serves as president of the board of Hammond Mill Camp, Inc., which governs and schedules events at the camp. At the camp, they knew, they could take refuge in one of the cabins.

But to get there, they had to cross the Bryant and also the North Fork of the White River. And both rivers, they knew, were roiling with floodwaters.

Warren Bridge, near their home, was completely submerged. And so was the Highway 181 bridge near Hodgson Mill. They would have to go around, through Gainesville, then head east on Highway 160 to PP Highway, crossing the North Fork on James Bridge and then continuing on H Highway to CC Highway at Dora, where they would cross the North Fork again on the Cudworth Memorial Bridge near the North Fork Recreational Access (also known locally as the Hammond Camp access, a short distance away from Hammond Mill Camp).

“Our usual way to Gainesville would be to go FF Highway to Highway 181,” Robin said. “But that night, on Highway 181, we drove to Zanoni probably five times or more, and the water was always over the road at Pine Creek. The last time, Rich got out and looked at it and realized the bridge was broken and we weren’t going to be able to cross it.”

They turned around again and finally were able to get to N Highway by cutting through on County Road 154. “I remember when we got to N, in the lightning I could see a cow standing up on a mound, and everything around her was water,” Robin said.

They made it to Gainesville and turned east on Highway 160. “We got to Tecumseh, and we were the first car they wouldn’t let cross because the river was lapping over the bridge,” she said. “We were heartbroken.”

The Mustions turned around again, went back to Gainesville and headed up Highway 5 north to Ava and then on to Mansfield to drive east on Highway 60, planning to turn south on Highway 63 to West Plains and then come into the camp on CC Highway from the east.

“But Highway 63 was closed north of West Plains, and we sat in a line of traffic on the side of the highway with flashers on for hours,” Robin said. “Rich slept in the truck, and I slept in the car with the dogs. When the sun came up the next morning, we had no idea what to do.”

They decided to try heading west from Pomona and made it as far as AP Highway. But, then, as they turned south on their way to Highway 14, their hopes were dashed when, about a mile before reaching Highway 14, they came upon a bridge that had been completely swept away.

They retreated to a truckstop in Cabool, where Robin called her brother, Kent Caplinger, who lives in Ozark. With his navigating help using computer maps, they were finally able to reach Twin Bridges on Highway 181 northeast of Dora.

From there, heading west and then south on Highway 181, they continued on through Dora. Finally, they turned east on CC Highway, relieved to know they were almost to Hammond Mill Camp.

But only 2 miles from their destination, the Mustions encountered what they first believed was debris covering the Cudworth Memorial Bridge over the North Fork River. Exiting the vehicle for a closer look, they realized, to their astonishment, they were seeing waves of muddy water rushing over what should have been the bridge deck, which normally stands 20 to 30 feet above the river. (The bridge would soon collapse completely.)

Once again, they turned around.

They retraced their steps back through Twin Bridges and continued on to Highway 63 and reached a point beyond the high water that had closed it farther north. They eventually turned west onto CC Highway and finally reached Hammond Mill Camp at 10:30 a.m. Sunday.

They had spent 18 hours in their cars, urgently trying to reach safe shelter.

“It was such a relief to be there,” Robin said.

The camp’s caretaker at the time, Rick Yeager, helped them settle in. “People brought food,” Robin said. “So many people wanted to help.”

She stayed there two weeks. Rich managed to return briefly to the house the next day and found the horses, waiting to get back into their corral. A few days later, Robin’s brother, sister- in-law and a cousin brought tents and helped them set up camp on their devastated property to begin the massive cleanup work. Robin, Rich and the Great Danes lived in the tents for four weeks.

Along the Bryant and the North Fork, the floodwaters had destroyed dozens of homes, sweeping many of them completely off their foundation. Amazingly, the Mustions’ cabin still stood – but everything in it was destroyed.

The deep water had left “nasty, sticky mud” on nearly every surface in the house, Robin said. “It picked up the large, full propane tank and raised it up over the deck rail and sat it on the deck!” In the small laundry room, the raging water had picked up both the washer and the dryer, turned them over and mangled them, she said.

A perspective gained through grief

The Mustions mourned the loss of their beloved sanctuary, but it wasn’t as devastating for them as it was for many other families. For one thing, said Robin, “Once you’ve lost a child, it puts all other trials in perspective. When you’ve lost a child, a flood isn’t that big of a deal.”

The other thing that helped them recover was that, unlike almost all other Ozark County property owners who lost their riverside homes, the Mustions had flood insurance.

Because Ozark County’s government does not participate in the federal flood insurance program, most residents who lived along the river said they were unable to get flood insurance for their property, so they had limited resources as they tried to recover. But somehow, the Mustions had the insurance.

“I don’t really know how it happened,” Robin said. “But the mortgage company made us get it. Rich found it for us by contacting an out-of-state broker.”

Now, four years later, the Mustions’ riverside cabin is being restored, and they still go there daily to check on things and take care of their animals. However, they live a few miles away in a home they purchased and remodeled on Highway 181. “We’re high up on a mountain now with our Danes. If we flood here, the world needs an ark,” Robin said, laughing.

The Mustions praise God for His love and support during the tragic events they have faced.  “He gave us strength when we felt we could not go on, and our relationship with Him is stronger from the experiences,” Robin said.

But today, four years later, they say when it rains hard for extended periods, a feeling returns that reminds them of their 18-hour journey to Hammond Mill Camp. One dog still becomes nervous and pants in the car if it’s raining while another is afraid of all thunderstorms, Robin said.