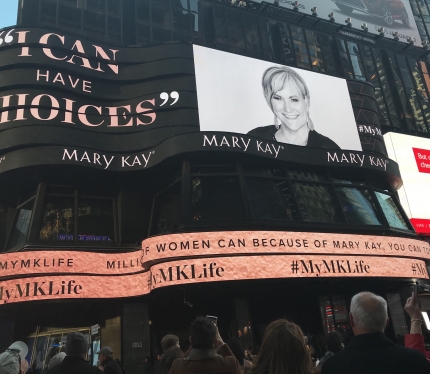 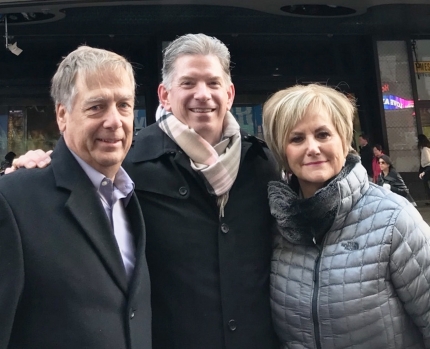 It’s not every day that an Ozark County native’s photo appears, billboard size, in Times Square, but one was there recently when Tawnya Crisp Krempges’ smiling face appeared on the ABC building’s Megatron in New York City. The publicity came when Tawnya’s Mary Kay unit met the challenge of having a higher volume of sales for 2017 than in the previous year – with a minimum of $500,000. Tawnya’s unit, which has 347 consultants in 29 states, had $800,000 in retail sales, earning Tawnya the privilege of being featured in the cosmetics company’s Times Square advertising promotion.

Tawnya, a 1971 graduate of Gainesville High School, joined Mary Kay 45 years ago in 1972 while she was still living in the Gainesville area. She became interested in the company “when I learned that it is based on the golden rule and the philosophy of putting your faith first, your family second and your career third, which was and still is important to me,” she said.

When she moved from Gainesville to Iowa and became a mother of two, she decided to focus on Mary Kay as a career because she didn’t want to work a 40-hour week, she told the Times this week in an online message. Within that first year in Iowa she became a sales director, “and my unit broke a record during qualification. [Company founder] Mary Kay Ash herself came to our debut!” she said.

She continued with Mary Kay, growing her business in Iowa and other states for 11 years before moving to Mount Vernon, Missouri, where she lived 29 years. Four years ago, she and her husband, Steve, moved to Edmond, Oklahoma. They have raised six children and now have 14 grandchildren.

Her Mary Kay unit has been ranked 14th out of more than 10,000 units nationwide, and it was number one in the Diamond Go-Give Division’s 2014 conference in Dallas. She has received 16 of Mary Kay’s “Prestigious Pink Cadillacs” through the years, and she and her husband have traveled the world on reward trips, enjoying cruises and week-long stays in luxury resorts.

Still, she’s grateful for her small-town roots, remembering “a lot of wonderful people from or still in our little town.” Tawnya’s sister and brother-in-law, Nicki and Joe McFarland, still live in Gainesville. She adds that she “had wonderful parents,” the late G.R. and Jo Crisp, and believes that “with God’s help we can do or become anything. As Zig Ziglar used to say, ‘If you help enough other people get what they want, it will circle back into your own life.’ I have been richly blessed,” she said.