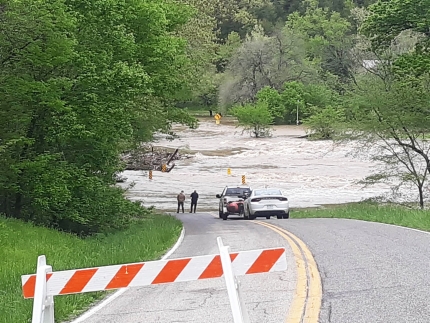 photo courtesy of Amelia LaMair Missouri State Highway Patrol marine troopers and another emergency responder look out upon the swollen water of Bryant Creek April 5 during the search for three floaters who had put in the day before for a 3-day canoe trip. The boaters got to their take-out location at Warren Bridge a day and a half early and were unharmed.

What started as a potentially scary situation for emergency personnel on Bryant Creek last Wednesday, May 4, turned out to have a happy ending.

According to Sgt. Eddie Young with the Missouri State Highway Patrol, a marine division trooper received a call from someone who reported that three men had put their canoes in on Bryant Creek for a 3-day float trip. Extremely heavy rainfall and the steeply rising river caused the caller to be concerned for the safety of the floaters.

The caller said the trio had put in at Bertha Ford near Rockbridge on May 4, and they’d planned to float, camping alongside the riverbank for two nights, to Warren Bridge, about 21-river miles below.

From the morning the floaters put in to the height of the search, Bryant Creek swelled to more than twice its size, rising from just over 6 foot in height on April 4 to a crest of more than 12.5 feet at 9 a.m. the next morning. It was wide, swift and full of dangerous uprooted trees and dead rootwads that had been lying alongside the banks from previous floods tumbling downstream with the torrent of water.

The search ceased April 5 when the three men got to their take out location at Warren Bridge a day and a half sooner than they’d originally intended and walked up the dirt road to find phone reception. They made a call out, asking someone to get someone to pick them up early.

“I was headed to Hodgson to go search, and [MSHP Marine Trooper John] Roberts called me and said they were supposed to be at Warren [Bridge] on my side,” said Dora Fire Chief Monte Shipley, who helped with the search. “The water patrol was on the other of Warren and said they could see someone over there but couldn’t tell if it was the floaters or not.”

Shipley said he quickly turned around and headed toward Warren Bridge.

“I came sliding in there with my lights on and everything, and there they were minding their own business. I said, ‘You don’t know how happy I am to see you guys.’ They looked at me and asked, “You were looking for us?’ They had no clue we were searching for them,” Shipley said, laughing. “It was a happy ending, and they were all very thankful that we put in the effort.”

Shipley said that the men told him that they’d planned to camp somewhere above Hodgson Mill the first night on the river, but the swiftly flowing river carried them quickly down past Hodgson, and they found a spot to camp below the mill and bridge that was safe.

“They were experienced. They had been doing this for more than 30 years, so they were river-smart. They knew to camp at least 15 feet above the river, which they did that first night,” he said. “The rain came hard that night, and it got kind of out of control. So they launched out the next morning and made it to Warren about a day and a half ahead of schedule. And of course, there’s no cell phone reception through there so they couldn’t call anyone to say they were OK.”

The men were picked up that morning, leaving with quite an exciting story to share.

“We are very fortunate this did not turn out different,” Young said.