For the first time in almost 30 years, volleyball will be played in Ozark County high school gyms 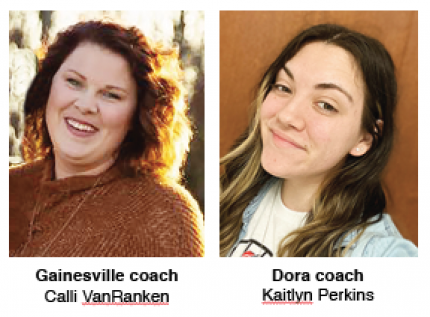 Editor's note: After this article was printed, a Times reader called in to report that Dora School did have volleyball at the high school level in the early 2000s.

A sport that has been dormant in Ozark County for nearly three decades is making a comeback as Bakersfield, Dora and Gainesville schools all voted to add girls volleyball to their high school sports lineups next fall.

“Our district and students seem to be excited about another opportunity for girls to participate in activities,” said Gainesville Superintendent Justin Gilmore. “Volleyball is a lifetime sport that can be enjoyed well beyond our students’ high school careers.”

“Many schools have transitioned from fall softball to fall volleyball,” Gilmore said. “Scheduling games with schools that are located anywhere near Gainesville has become increasingly difficult for fall softball.”

The superintendent explained that in order to comply with Title IX, which ensures equal number of extracurricular opportunities for girls and boys, the school chose to add volleyball in the fall to take the place of softball and field a softball team in the spring season.

Now the sport is back at GHS and the school has hired Calli VanRanken as the head volleyball coach.

“I am grateful to the Gainesville School District for the opportunity to join the Bulldog team,” VanRanken said, “I have had lifelong relationships with great coaches that have helped mold me into who I am today. My hope is to establish and grow a successful volleyball program and play a vital role in women’s athletics.”

Sports has been a passion throughout her life, VanRanken said. She said she was honored to be a part of a long history of state-qualifying teams that encompassed volleyball, basketball and track.

Gainesville is the only school in Ozark County that once offered volleyball, and the Lady Bulldogs had a very successful program in the 1980s and 1990s.

“We had some years there at first when the sport was new to our school that we didn’t compete very well, but we improved and had some great teams. It was an honor to get to coach all those years.”

For other Ozark County Schools, volleyball is brand new.

Dora superintendent Allen Woods said their district started doing some research last year and found interest in volleyball among students was very high, so the school board voted to add the sport for next fall.

In the meantime, Dora has hired an elite volleyball player in her own right as their new coach.

The school hired Kaitlyn Perkins as the new head volleyball coach. Perkins was a standout volleyball star at Willow Springs High School, leading the Lady Bears to a district championship in 2018 and was named team MVP. She continued her volleyball career at Crowley’s Ridge College in Paragould, Arkansas, and set several school records there.

Dora School officials said Perkins has 10 years of playing experience at the high school, travel and NAIA levels, and she has four year of experience as a volleyball coach for travel club teams and has taught private lessons. She graduated from Crowley’s Ridge with a BSE in physical education and a minor in business administration.

At Bakersfield, Superintendent Amy Britt said the school had been considering adding volleyball for the past couple years, and they had some girls in their district request the sport. “Additionally, many of the rural school students, who come to us from K-8 districts, play volleyball at the K-8 level, so it was an easy choice for us.”

To comply with Title IX, Bakersfield added boys golf in the spring season.

“Even though girls will be allowed to play golf, we will compete in the boys’ season to comply with Title IX. We have also added a fall baseball schedule. Girls softball will now be played in the spring,” Britt said.